JNF activity in the West Bank: Demolition of Palestinian homes on behalf of settlers and settlement construction

In early September 2019, settlers established a new outpost on parcels of land it claimed west of Bethlehem, near Beit Jala and Battir, in the West Bank. A group of settlers started fencing and doing field work, and brought in two trucks typically used for residential purposes. The outpost was established only 70 meters from the Palestinian Cassia family’s home, which was demolished along with an adjacent restaurant it ran by the Civil Administration following pressure from the KKL-JNF (Kerem Kayemet LeYisrael-Jewish National Fund).

This outpost in the Makhrour area marks the 25th outpost erected since the election of U.S. President Trump, whose policy toward Israel has played a significant role in the proliferation of Israeli settlement activity. Click here to see the 25 new outposts since November 2016. For an in-depth look at the revival of outpost building under Prime Minister Netanyahu and new trends, click here.

The Palestinian landowners intend to file a police complaint demanding the eviction of the settlers. The settlers claim that they have rented the land from Himanuta, a subsidiary of KKL-JNF. It should be noted that the Palestinian landowners, who purchased the land from the previous owners in the 1960s, only in recent years heard right about Himanuta’s claim that it purchased the same parcel of land, despite living on it for decades.

Peace Now: Establishing the new 70m outpost on a Palestinian house destroyed by JNF pressure removes any doubt: When the JNF demanded the demolition of the Cassia family’s house, it didn’t mind illegal construction on the land it claimed; it just did not want Palestinians on the land. Now it leases the land to Israelis who have erected an illegal outpost on this land. Unfortunately, the Jewish National Fund has become a Jewish settler.

In the Makhrour region, a Palestinian owner sold his land to several Palestinian families in the 1960s and left for South America. Among the purchasers was the Cassia family, whose house was demolished by the KKL-JNF, as well as the Kahat family on whose land the new outpost was built. When Himanuta joined the petition demanding to demolish the Cassia family’s restaurant, it claimed that in 1969 it purchased the land from the original owners.

It should be noted that for 50 years since acquiring the land, Himanuta did nothing in the field, while the Cassia family owned the land and even built ts house upon it decades ago without anyone claiming ownership.

As to the area of ​​the new outpost, there is no information yet on what Himanuta’s claim is based on, but since the original owner also owned this plot, it is likely to be based on the same 1969 acquisition. In response, Himanuta told the Haaretz newspaper that it owns seven plots in the area.

What is clear is that the question of ownership is in dispute and there are heavy allegations against Himanuta’s claims regarding both possession of the land and the ownership of the property when probably both parties purchased the land from the same seller, yet one party held the land for decades while the landowner was not in the field.

According to Himanuta, it leased the area to the Neve Daniel Cooperative Association – the body that brings together the settlers of Neve Daniel settlement about 4 km south of the new outpost – for agricultural work. As mentioned, settlers placed two trucks on the area. The trucks are designed to evade demolition orders, but in fact, as seen in many other places, they are actually used as residences for everything (see photos, for example, here in the Shirat Haesevim outpost, and here in the Negohot Farm outpost).

The Makhrour land is a strategic area for the settlers and in recent months it has emerged that alongside KKL-JNF’s efforts to demolish the Cassia family home, the settlers had begun to exert pressure to take over the area. In December 2018, settlers attempted to establish a new outpost about a kilometer from the current outpost. They paved an access road and erected a building and infrastructure, but they were evacuated by the Civil Administration immediately after the outpost was established.

The reason for the importance of the area is that it constitutes a continuum of Palestinian presence west of Bethlehem, without any Israeli settlement, and in fact connects five Palestinian villages to Bethlehem (Walaja, Batir, Husan, Wadi Fukhin, Nahalin), where 25,000 Palestinians live.

As can be seen on the map below, the Palestinian continuity from west to east interrupts the settlement continuity from north to south, between Jerusalem and the settlements of the Gush Etzion area. The attempt to settle the area and remove the Palestinians from it is clearly for the purpose of creating a contiguous line of settlements that will sever Palestinian villages from Bethlehem on the one hand, and connect the Gush Etzion settlements to Jerusalem on the other. In order to begin laying down this settlement contiguity, the settlers already established the outpost “Sde Boaz” (Neve Daniel North) in 2002. 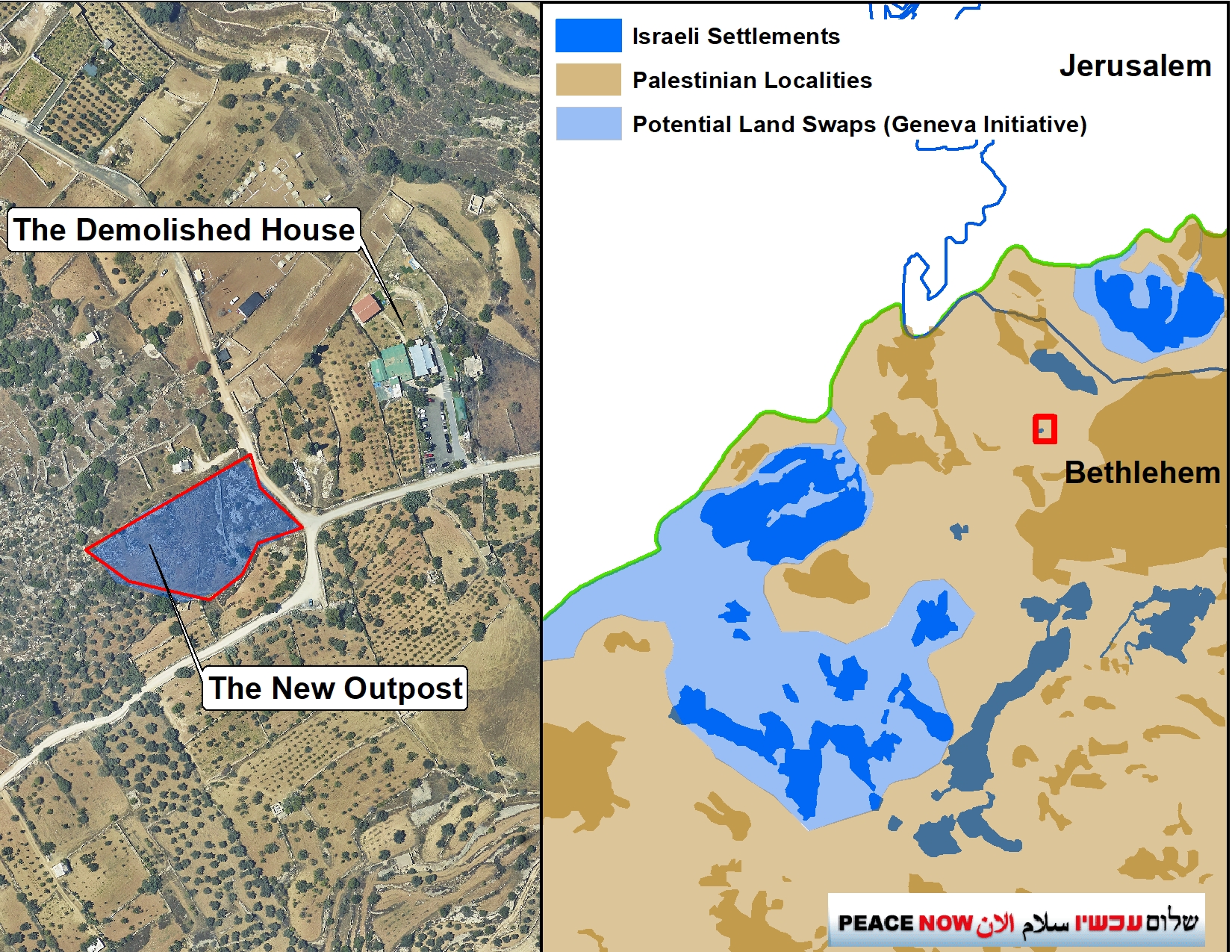 Since 1967, the JNF has operated in the Occupied Territories and assisted in the establishment of settlements. It has helped to pave roads and infrastructure, establish parks and promenades, and even provide livelihoods in forestry work and the like for settlers in newly established settlements. See, for example, a list of KKL-JNF projects in the settlements in 2002-2013 (published by journalist Raviv Drucker). The JNF subsidiary, Himanuta, has purchased properties and land throughout the West Bank for future settlements. Following criticism of the JNF for its activities in the Occupied Territories, it has tried (or at least the North American branch) over the years to curb its activities in the settlements.

Registration of large swaths of land in the Gush Etzion area

In July 2012, Himanuta filed a lawsuit in the Jerusalem District Court demanding to register a large 522 dunam area south of Bethlehem based on a purchase of land made before 1948. The Palestinian landowners claimed to be the rightful owners and both parties presented to the court Kushans (Mandate-era ownership documents) indicating their ownership, in order to determine the extent and location of the land. Although the Kushan states that it is a 74-acre land, Himanuta was able to convince the court that the real area it owns is 522 acres, and that the land has been registered to its name. Settlers and politicians on the right celebrated the victory and saw it as “the expansion of Gush Etzion’s land.” Thus, KKL-JNF lands automatically became settlement land. It should be noted that the pre-1948 property demand is particularly sensitive because the State of Israel strongly opposes the exercise of the right of return for Palestinians and asserts that assets that were owned by Palestinians in Israel prior to 1948 will not be returned to them. Land returned to Jews that had been in Jewish hands before 1948 in the Occupied Territories undermines the moral basis for Israel’s opposition to the right of return (and is illegal under international law while the local inhabitants do not enjoy full rights), but even so, Himanuta preferred to take action to promote settlement interests in the Occupied Territories.

In 2013, the Givat Eitam outpost was established on the lands of the village of A-Nahala, abutting Bethlehem from the south, which Himanuta acquired in the 1970s and 1990s. The outpost was evacuated by the settlers a few years later but was rebuilt in late 2018. The area of ​​the outpost is strategic in terms of the prospect of future development of the Bethlehem area and the establishment of a settlement on ground threatens to sever the southern West Bank’s in half and thereby the prospect of a two-state solution. Hence it was dubbed by diplomats and journalists as “E2,” in reference to the infamous “E1” plan which would sever the West Bank in half if the corresponding land were ever settled. Meanwhile, the Ministry of Housing has begun preparing a plan for the establishment of a new settlement with hundreds of housing units on these KKL-JNF lands. In this case, KKL-JNF is in fact the enabler of establishing one of the most politically controversial projects, with far-reaching implications for the prospect of peace. For more on Givat Eitam (E2) and its implications see here and here.

Over the past two years, KKL-JNF’s involvement in settlement activity has been notable, and it is following the same operational patterns of settler organizations.

Judea and Samaria Transaction Coordinator – In August 2017, KKL-JNF issued a post for “Judea and Samaria Transactions Coordinator“, and in response to criticism of the intention to continue to purchase land in the Occupied Territories, it claimed that it was only due to the employment of a retired employee and that there was no intention to renew the acquisitions. In those days, Mr. Arad, who was previously an employee for Regavim, began to work reliably in monitoring illegal Palestinian construction and exerting pressure and petitions to demolish their structures. It turns out that he learned the methods from Regavim, and thus recruited KKL-JNF for the activity of dispossessing Palestinians in the West Bank.

Petition for demolition of Palestinian houses in Arab ar-Ramadin – In February 2017, the Regavim Association filed a petition to the High Court demanding the demolition of houses in the Bedouin village of Arab ar-Ramadin in the Qalqiliya area in collaboration with Himanuta. The demand to demolish the houses was based on the claim that the village houses were built on land owned by KKL-JNF (Himanuta). In those days, the right-wing people used the petition as a tool to hamper the Supreme Court on the pretext that the court discriminated against settlers and Palestinians. They tried to argue that while the court ruled to evict settlers who invaded Palestinian private land (in the Nativ Ha’Avot outpost and in Amona), it avoided it when it came to Palestinians invading Jewish-owned land. However, during the hearing of the petition, it became clear that the owner owns a small portion of the land (only 6%), and no longer owns the land in partnership with many other owners (Palestinians), so that her rights are very limited. In April 2019, the court dismissed the petition.