Peace Now is the largest and longest-standing Israeli movement advocating for peace through public pressure.  Under the mission of arriving at peace agreements between Israel and its neighbors, Peace Now currently works to ensure Israelis embrace the only viable solution to the Israeli-Palestinian conflict: two states, meaning the creation of a Palestinian state alongside Israel. Peace Now’s activities include demonstrations, calls for action, lectures, debates, tours, public campaigns and more. Through these activities Peace Now seeks to educate the public, represent the portion of the public that shares its views, mobilize it and as a result influence the mainstream Israeli public – all out of a strong conviction that politicians are susceptible to public pressure. Peace Now’s activities are meant to ensure that issues related to Israeli Palestinian peace remain on top of the political agenda and the public discourse.

In the early 1990s, after identifying settlements as one of the largest obstacles to the two state solution, Peace Now established Settlement Watch, taking upon itself to track and analyze developments in the settlements. Through research, analysis and exposure of settlement developments, Peace Now works to prevent settlement expansion and stop illegal settlement activity. The Settlement Watch team is internationally acclaimed for its credibility and reliability and is regularly cited by Israeli and international media, governments, and NGOs.

Peace Now was founded in March 1978, in an act known to the Israeli public as “The Officer’s Letter.” Following the visit of Egypt’s President, Anwar Sadat, to Israel, a group of 348 reserve officers and soldiers from Israeli army combat units published an open letter to the Prime Minister of Israel, Menachem Begin, calling upon the government to make sure this opportunity for peace was not lost.Tens of thousands of Israelis supported the letter, and the movement was born. When Egypt and Israel signed their historic peace treaty in 1979, members of Peace Now and the general Israeli public realized that public pressure and action in support of the peace process could and would dictate the course of history. 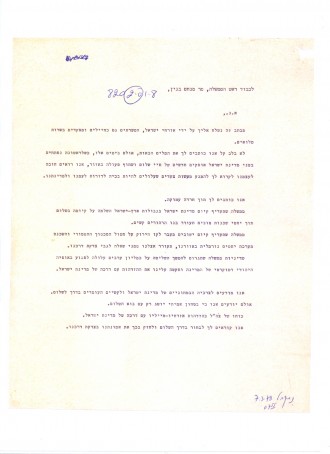 In time, Peace Now became convinced that the only viable solution to the Israeli Palestinian conflict was the creation of a Palestinian state in the West Bank and Gaza, which were occupied during the 1967 war. In order to assure the possibility for two states, Peace Now began its struggle against the settlement enterprise.

In 1982, the movement organized the largest demonstration ever held in Israel, in which 400,000 people called to establish a commission of inquiry following the Sabra and Shatila massacre. One of the commission’s recommendations was removal of Minister of Defense Sharon from his position.

In 1988, upon PLO acceptance of UNSC Resolution 242 and the principle of the two-state solution, Peace Now led a massive demonstration of 100,000 calling on the government to negotiate with the PLO. Peace Now fully supported the breakthrough represented by the 1993 Oslo Accords, during which Israel and the PLO negotiated directly for the first time, and as a result of which Israel withdrew its military from parts of the West Bank and Gaza and the PLO renounced violence and publicly accepted Israel’s right to exist.

In 1994, Peace Now and its supporters celebrated another historic breakthrough when Israel and Jordan signed a peace treaty normalizing relations between the two countries.

Over the many years of its existence, Peace Now has consistently supported any and all steps promising to promote a resolution to the conflict, in addition to pressing all Israeli parties in power to initiate steps to bring about an end to the occupation, return to the 1967 borders and negotiations for peace. 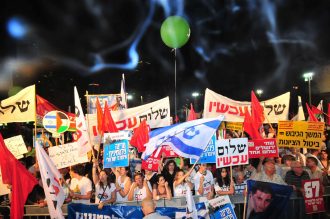