Following the exposure of the annual transfer of tens of millions of shekels to Amana from various settlement authorities, Peace Now is petitioning the High Court of Justice to close the money tap. The demand to end the flow of funds to Amana is based on the facts that Amana is a private for-profit entity ineligible to receive these funds, construction in the occupied territories is not one of the Ministry of the Interior’s criterion for allocation of these funds, and that Amana uses the money to build illegal outposts.

Last July, Peace Now published information on the Mateh Binyamin Regional Council’s subsidies after a long legal battle, due to the council’s attempts to conceal the matter. The information revealed that one of Amana’s most significant sources of funding, which amounts to tens of millions of shekels per year, are the funds transferred to it by various authorities in the West Bank.

As published in the Israeli media, from the years 2013-2015 Amana received over NIS 94 million from various authorities in the West Bank, contrary to regulations and against the law. For more information on financial support transferred to Amana, read here. 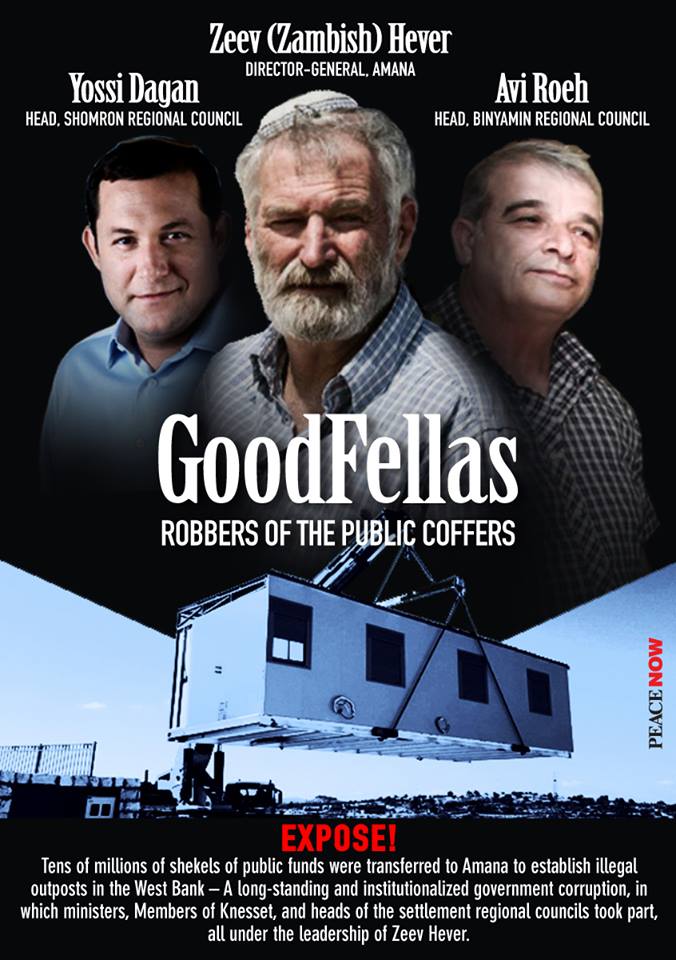 After disclosing the data, Peace Now appealed to all the authorities that either transferred funds to Amana, or are suspected of having done so, demanding that they cease to do so as it violates the law and regulations. Yet no relevant replies regarding the matter have been offered by any of them, to date.

We also appealed to the Ministry of the Interior, which is responsible for the authorities’ operations, yet have not received a reply. In light of this disregard and concern that these funds, which are in fact public funds, will continue to flow unhindered into an organization responsible for the establishment, expansion, and entrenchment of many illegal outposts in the occupied territories, Peace Now is petitioning the Supreme Court to order the Ministry of the Interior to cease this cash flow immediately.

Peace Now: “This grave phenomenon in which taxpayers’ money is transferred to an organization that has specialized in construction violations for decades, is against the law and regulations; an organization that works tirelessly to change reality by illegally establishing unauthorized facts on the ground, is dire and must be stopped. Only a complete cessation of this cash flow will prevent further construction rampages throughout the West Bank, and retain the opportunity for a future agreement.”

Three former ministers who addressed economic and social issues partook in the petition: the former minister of the interior and science, culture and sport, Ophir Pines-Paz, who is the current head of the Institute of Local Government at Tel Aviv University; former Industry and Trade Minister Ran Cohen, and former deputy minister of finance and economics and justice minister, Yossi Beilin.

Ran Cohen, a former Knesset member and minister: “The hundreds of millions [of shekels] that are transferred to Amana without oversight, amount to no less than theft of public funds. The government that enables this to continue proves time and time again that discrimination against Israel’s impoverished population is part of its policy.”

Yossi Beilin, former Knesset member and minister: “Amana’s activities in the settlements cause tremendous damage to the state of Israel. For years, Amana’s crew along with leaders of the authorities in the [occupied] territories, have been establishing facts on the ground, erecting new settlements, illegally expanding existing ones, and dragging an entire country into their messianic adventures without governmental authorization. The time has come to stop this lawlessness.”

Subsidies annually transferred to various organizations by authorities in Israel and in the West Bank, must be done so according to a clear and binding procedure (the Ministry of Interior’s Subsidy Procedure of 2006). According to the subsidy procedure, funds may solely be transferred to public institutions and not to private bodies. The regulations also indicate that subsidies will be transferred to institutions working for “education, culture, religion, science, art, welfare, sports, health, or similar purposes.”

Amana is a cooperative, which is considered a private entity, and is thus not entitled to receive subsidies from the authorities. In late 2017, the state comptroller published an audit report on the Binyamin Regional Council, and criticized the council’s transfer of funds to other cooperatives, in light of the fact that this violates the Ministry of the Interior’s established subsidy procedures. It should be noted that non-profit organizations are required to meet high standards of auditing and to present the authorities with a certificate of proper management from the Registrar of Amutot (nonprofits), and other information on financial reports and recipients of salaries. Amana is not a nonprofit organization, and is nearly unregulated as a cooperative that is far from transparent about its operations. As written in its subsidy application from 2014, “We are not a nonprofit and are therefore exempt [from proper management approval].” Moreover, if a nonprofit organization violates the law, it cannot obtain proper administrative approval; yet Amana is an organization that violates the law on a daily basis through illegal construction, and is subsidized through public funds.

The state comptroller’s report also criticized the fact that the council had determined criteria for subsidies that were not in line with the procedures. “Some of the criteria are contrary to the procedure that regulates local authorities’ support for public institutions.” Amana’s subsidy applications were requested under the criteria for “settlement movements.” In the state comptroller’s report, the state comptroller referred to the criteria of “preserving land” and “redeeming land” in the context of nonprofits such as Regavim, declaring that “these criteria are not related to fields such as education, culture, religion, science, art, welfare, health, sports, and the like, including activities whose inclusion within the framework of the council’s functions and authorities is doubtful.” In fact, the comptroller determined that “in its decision to grant support on the basis of the above criteria, the Binyamin Regional Council deviated from the framework in which it is legally authorized to operate.”

Beyond the fact that Amana is a private body that cannot receive financial support and that its operations do not even hint at the subsidy procedure criteria, Amana makes use of tens of millions of shekels annually to finance wholesale criminal construction. As such, tens of millions of shekels of our tax money are annually transferred to authorities in the West Bank, to finance ideological criminal construction. The petition further states that “tens of millions of shekels flow from local authorities each year to a private body that uses its resources to advance its members’ political-ideological interests, while committed to its members over the public; its operations lie in a field that is not legally recognized for public financial support, and a substantial amount of the projects it carries out are illegal and constitute the spearhead of a grave phenomenon of organized ideological crime.”