Following a petition joined by the KKL-JNF subsidiary, Himanuta, demanding the demolition of a Palestinian family home near Bethlehem, the Civil Administration notified a family that its house would be demolished this Sunday.

The Cassia family lives in a house on a hill west of Bethlehem between the villages of Battir and Beit Jala. Near the house they run a restaurant with a spectacular view of the agricultural land of the area called “Al-Makhrour.” Like tens of thousands of Palestinians throughout the West Bank, whose land is considered Area C under the 1995 Interim Agreement, they need to obtain a building permit from the Civil Administration. However, because of Israeli policy of not giving almost any permits to the Palestinians, their requests for a permit were repeatedly rejected, and a demolition order was issued against their home and restaurant.

The family filed petitions to the High Court in an attempt to prevent the demolition, and the proceedings dragged on for years. However, in June 2017, a significant turnaround occurred in the case. KKL-JNF (the Israeli Jewish National Fund), through its subsidiary Himanuta, sought to join as a party claiming that KKL-JNF is the owner of the land. Himanuta presented a 1969 ownership document and demanded in court that the house and restaurant be demolished immediately.

The family claims to own the land for decades, and that it never sold the land to anyone, and certainly not to Himanuta, which suddenly showed up, fifty years after the alleged purchase of the land, to claim that it was the owner. It should be noted that the Al-Makhrour area does not have land registration records (“Tabu”) and, as much as there are real estate transactions, they are done according to inaccurate listings which often result in errors in delineating property borders.

The proceedings escalated quickly following this entry by KKL-JNF through its subsidiary Himamuta. Himanuta hired attorney Avi Segal, a prominent lawyer for settlement organizations (Elad and Ateret Cohanim in East Jerusalem, the Regavim association that works to evacuate and demolish Palestinian homes in the Occupied Territories and within Israel, and other right-wing bodies), and argued passionately that the family home and the restaurant must be demolished.

The family’s applications for a Civil Administration building permit were rejected on the pretext that the family did not own the land. On July 29, 2019, the High Court dismissed the family’s petitions and ruled that the demolition orders could be implemented. Thus, the decision whether to carry out the demolition, and when, was returned to the Civil Administration, which implements demolitions according to the priorities set by the Israeli government.

The family has not given up yet: To be able to apply for a building permit, it filed a lawsuit in the district court in order to prove ownership. It is a lengthy and expensive procedure that is required because there is no land registry (tabu) in the area. The family asked the district court to issue an order to halt the demolition until ownership is determined, so that the family can have a chance to request for a building permit. Unfortunately for it, five days ago, on August 18, 2019, the district court rejected this request. Yesterday, the Civil Administration notified the family that its home and restaurant would be demolished this Sunday.

Peace Now: KKL-JNF has become The Fund for the Expulsion of Palestinians. Through greed and cruelty of the JNF, it has thrown its weight its resources to the interests of the settlement agenda. Even if it were true that Himanuta was the owner of the land (which is under dispute), still, it could have come up with different solutions rather than demolition. It could have tried to negotiate with the family about renting or buying the land. The interest of evicting the Palestinian family that has been living in the area for decades, and destroying the restaurant from which it subsists, is not in the interest of the Jewish National Fund and does not reflect the desire of thousands of Jews in the world who donate their money to it. 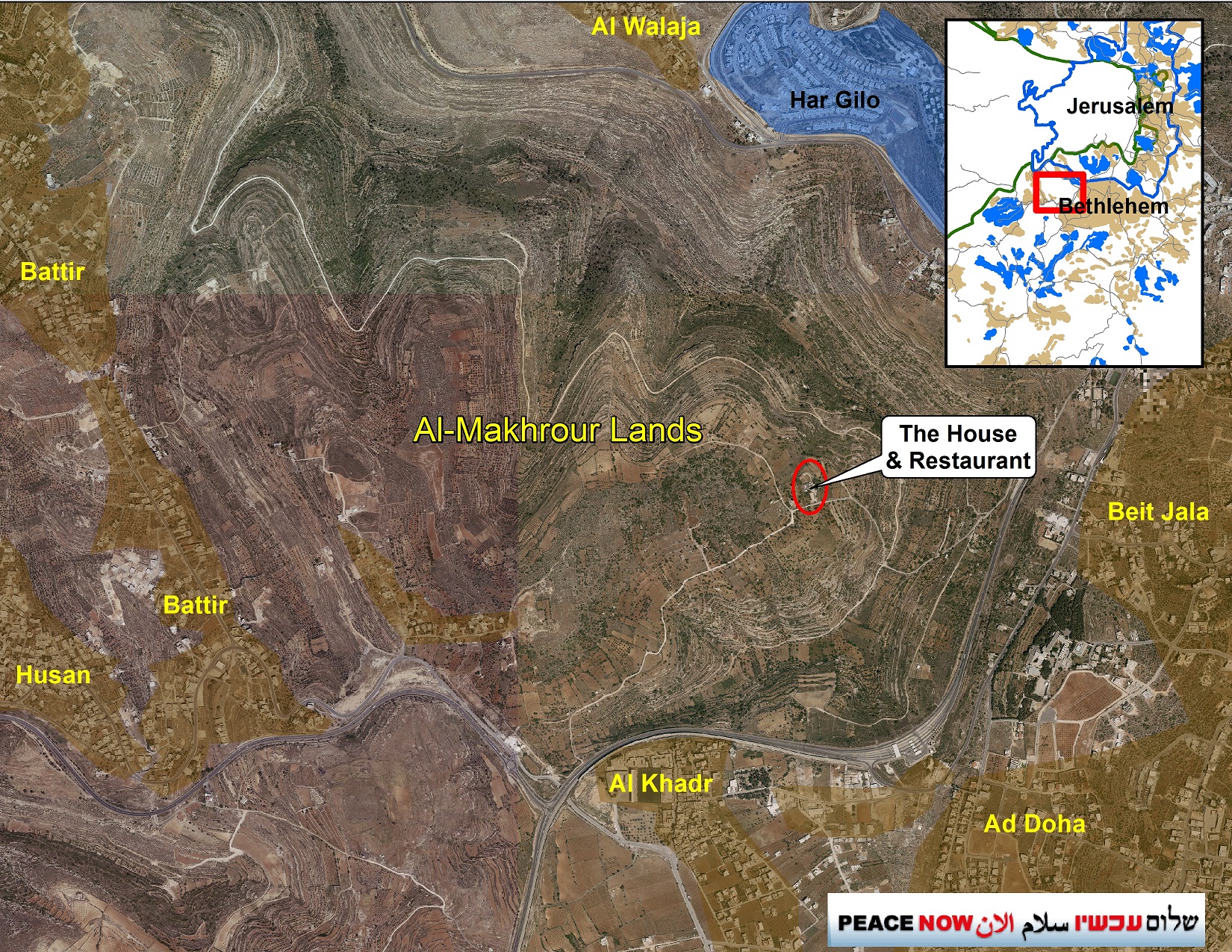 It should be noted that in recent years there has been a renewal in KKL-JNF’s efforts through its subsidiary, Himanuta, to expel Palestinians from their homes in the Occupied Territories. For example, in the case of the Palestinian village of Arab a-Ramadin, Himanuta petitioned for the evacuation of an entire village on the basis of an ownership claim (of a tiny portion of the land). Their petition was denied for the time being.

In East Jerusalem in Silwan, Himanuta sued for the eviction of the Palestinian Sumarin family, which has been living in its home even before 1967, based on dubious claims and for the benefit of settlers looking to dominate the neighborhood.

ٌRead more about KKL-JNF at the research by Maya Rosen and Daniel Roth: A Progressive Jewish Response to the Discriminatory Policies of JNF-KKL