Peace Now, along with dozens of Palestinian landowners, turned to the Custodian of Government and Abandoned Property demanding that it annul the allocation of 1,200 dunams of land in the Bethlehem area to the Ministry of Housing for the purpose of planning a new settlement. According to their claim, the allocation of state land declared for settlement purposes is illegal, and that rather than allotting land to settlements, it should be designated for the Palestinian population.

Since the 1979 Elon Moreh ruling, no petition has succeeded in undermining the legal infrastructure that enables the ongoing expansion of the settlement enterprise. This initiative and the surrounding public struggle aims to undermine the prevailing view that “state land” in the occupied territories effectively constitutes land available for Israeli use, and to obligate the Supreme Court and the Israeli public, to address this fundamental question. To read the appeal click here

In 2004, Israel declared approximately 1,300 dunams south of Bethlehem near the village of a-Nahla as state land. Nine Palestinian landowners filed appeals regarding the declaration. The appeals committee accepted their claim for approximately 100 dunams, yet for roughly 1,200 dunams it determined that the landowners did not prove that they had cultivated the land as consecutively and intensively as required. The landowners filed a petition to the High Court of Justice, which was rejected in January of 2016.

On December 26, 2018, the state announced that the land had been allocated to the Ministry of Housing for settlement planning purposes and that the allocation contract would take effect within 30 days (the announcement came after Peace Now petitioned the High Court of Justice demanding that the state inform of its intention to allocate).

On February 7, Peace Now, along with dozens of landowners, turned to the Civil Administration’s Custodian of Government and Abandoned Property demanding that the intention to allocate land to the Ministry of Housing be revoked and allocated to Palestinians instead.

The court’s Elon Moreh ruling constituted a genuine threat to the ongoing development of the settlement enterprise and necessitated a quick response from its ideological backers to enable further land seizure for the establishment of settlements. The response lies in the use of the “declaration” of land as “state land.”

The declaration mechanism manipulatively exploits the Ottoman Land Law of 1858. According to the Israeli interpretation of this law, land that is either not cultivated for several years by its owners, or is not cultivated with sufficient intensity, is transferred to state ownership. The state of Israel established a system that identified such “vacant” land and declared it public land. Indeed, during the 1980s and 1990s the state, sponsored by its legal advisers, declared nearly one million dunams of the West Bank as “state land” and allocated them exclusively and automatically for the development of the settlement enterprise.

Attempts to challenge the legality of the declaration procedures have failed (see HCJ 285/81 Fadil Muhammad al-Nazer et al. v. Commander of Judea and Samaria et al., ruling (1) 701). The court ruled that the military government in the West Bank has the authority to exercise this practice by virtue of its duty as administrator and usufructuary under Article 55 of the Hague Regulations, which obligates the occupying state to protect the assets of the occupied state and allows it to use its profits for the economy of the occupied territory. In other words, the legal excuse that enabled declaration of state land was the occupier’s obligation to protect the land of the occupied. In practice, however, the state of Israel used this excuse to transfer the land of the occupied to the occupiers.

Through the current legal process, Peace Now seeks to challenge the legality of the use of such “state land” for the benefit of settlers, and to claim that Israel’s duty as administrator and usufructuary prohibits it from allocating declared state land for the benefit of settlements. This claim in its current form, even if not foreign to the High Court, is novel for it and yet to be discussed.

Data revealed as a result of a petition by Bimkom and the Association for Civil Rights in Israel, followed by a freedom of information request submitted by Peace Now and the Movement for Freedom of Information, indicates that since 1967 Israel has allocated a minimal amount of land for Palestinian use (approximately 1,600 dunams), the vast majority of which was used for the expansion of settlements, while hundreds of thousands of dunams (roughly 660,000 dunams) were allocated to settlements and for Israeli use.

This figure indicates unequal and discriminatory allocation, both extremely unreasonable and tainted by extraneous considerations. It should be noted that land is one of the most important public resources, and allocating it for the sole use of one population at the expense of another population is one of the defining characteristics of apartheid. According to rules of proper administration and constitutional law in Israel that applies to authorities beyond the Green Line, the sole allocation of land rights to Jewish Israeli citizens is tainted by discrimination and inequality, and is therefore invalid and prohibited. 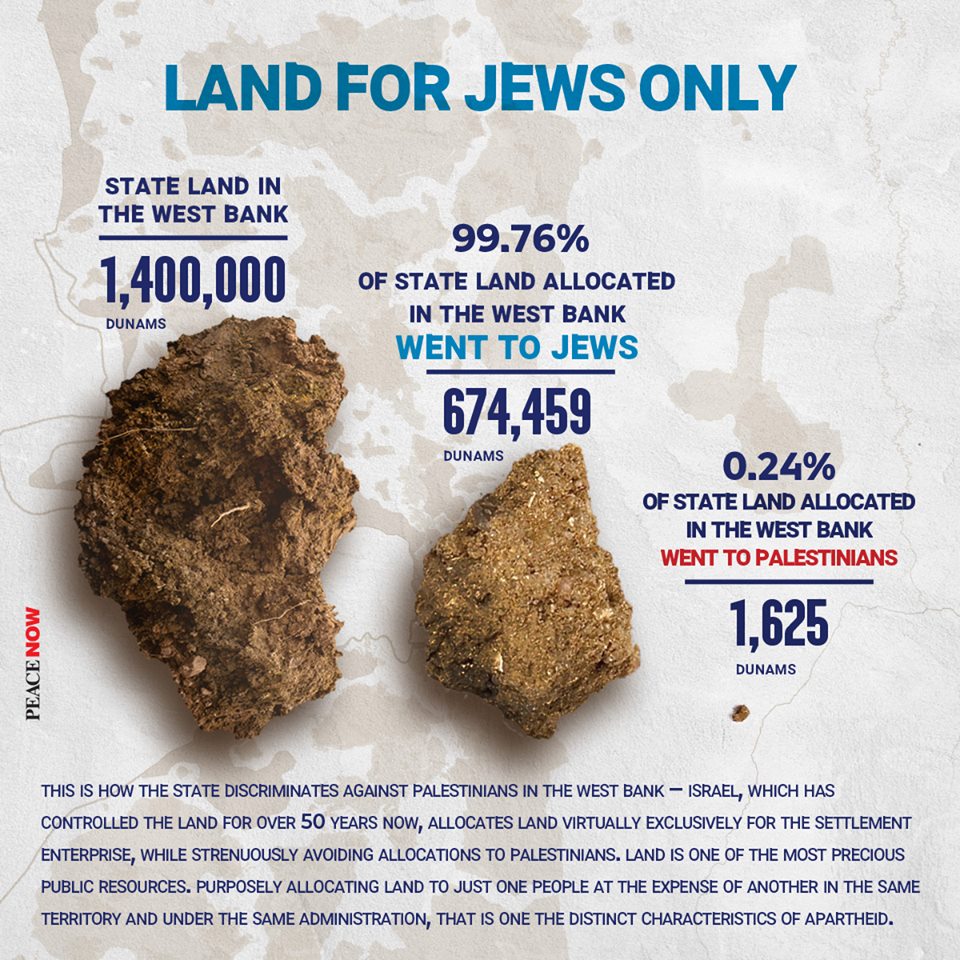 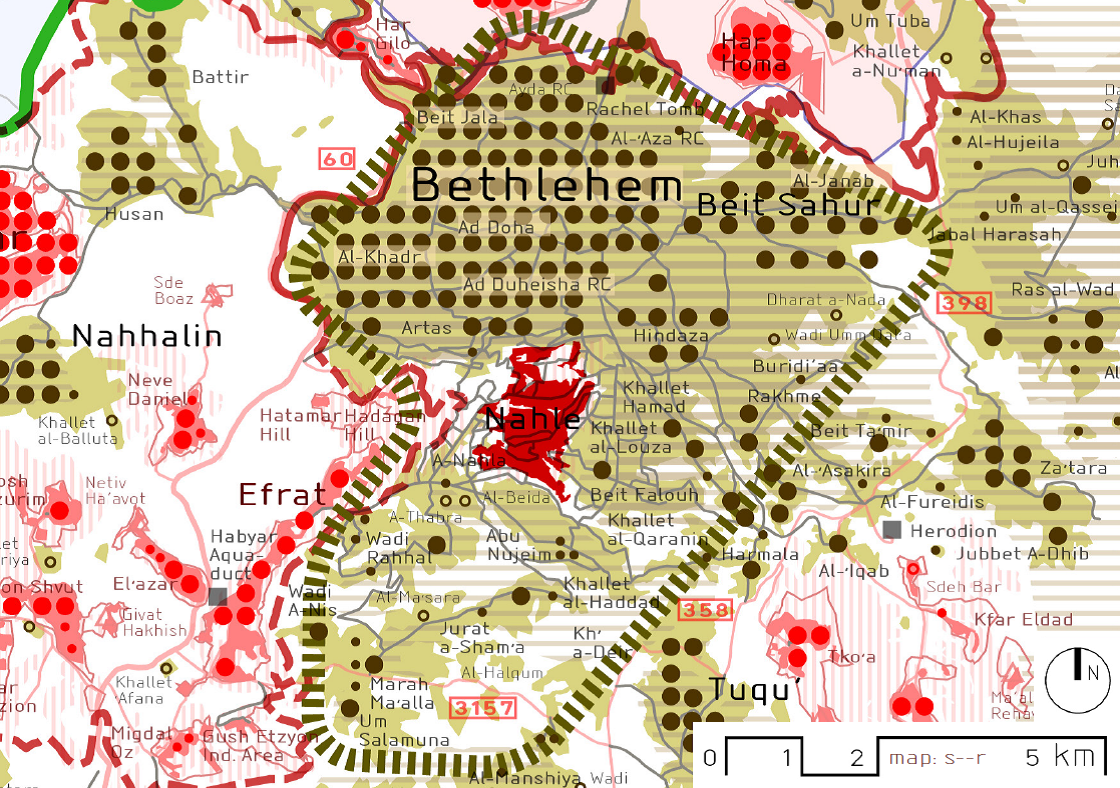 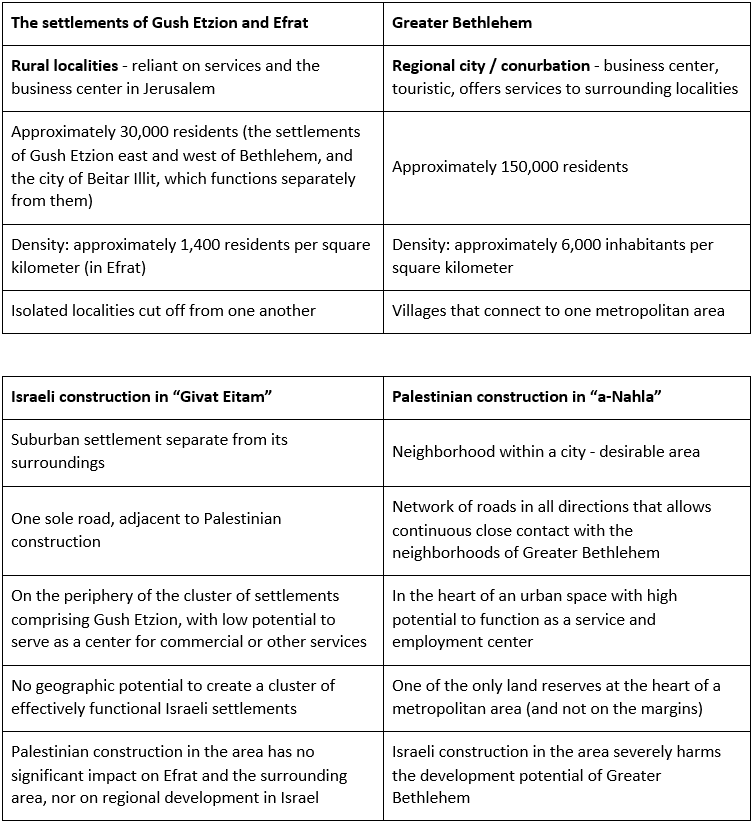