(to read the settlements construction report of 2020 – click here)

*** Update of road status, February 2022: In all reported roads there was no change except in the following roads:
Qalandiya Underpass – Work began in June 2021.
Eastern Ring Road Center – opened to traffic.
Upgrade of 437 Rd. – Around January 2022, work began on upgrading a small section of the road between the village of Hizma and the Hizma checkpoint.
Road 45 (The Quarry Rd.) and the Upgrade of Walajeh Bypass – the plans were published for deposit and in September 2021 a discussion of the objections took place, a decision has not yet been published ***

In recent years, the Israeli government has promoted a comprehensive plan to pave hundreds of kilometers of bypass roads in the West Bank. This plan is meant to provide the infrastructure required for doubling the settler population in the coming decades. The plan, which will cost billions of shekels, intends to enable faster safer travels from Israel to the settlements, without traffic lights and with minimal traffic jams, to encourage residents to move to the settlements. Past experience indicates that the moment a bypass road is opened to the public, significant growth commences in the surrounding settlements. For instance, this was the case under a decade after the Za‘atara Bypass Road (”The Lieberman Road“) opened, wherein the number of residents in the settlements along it doubled. 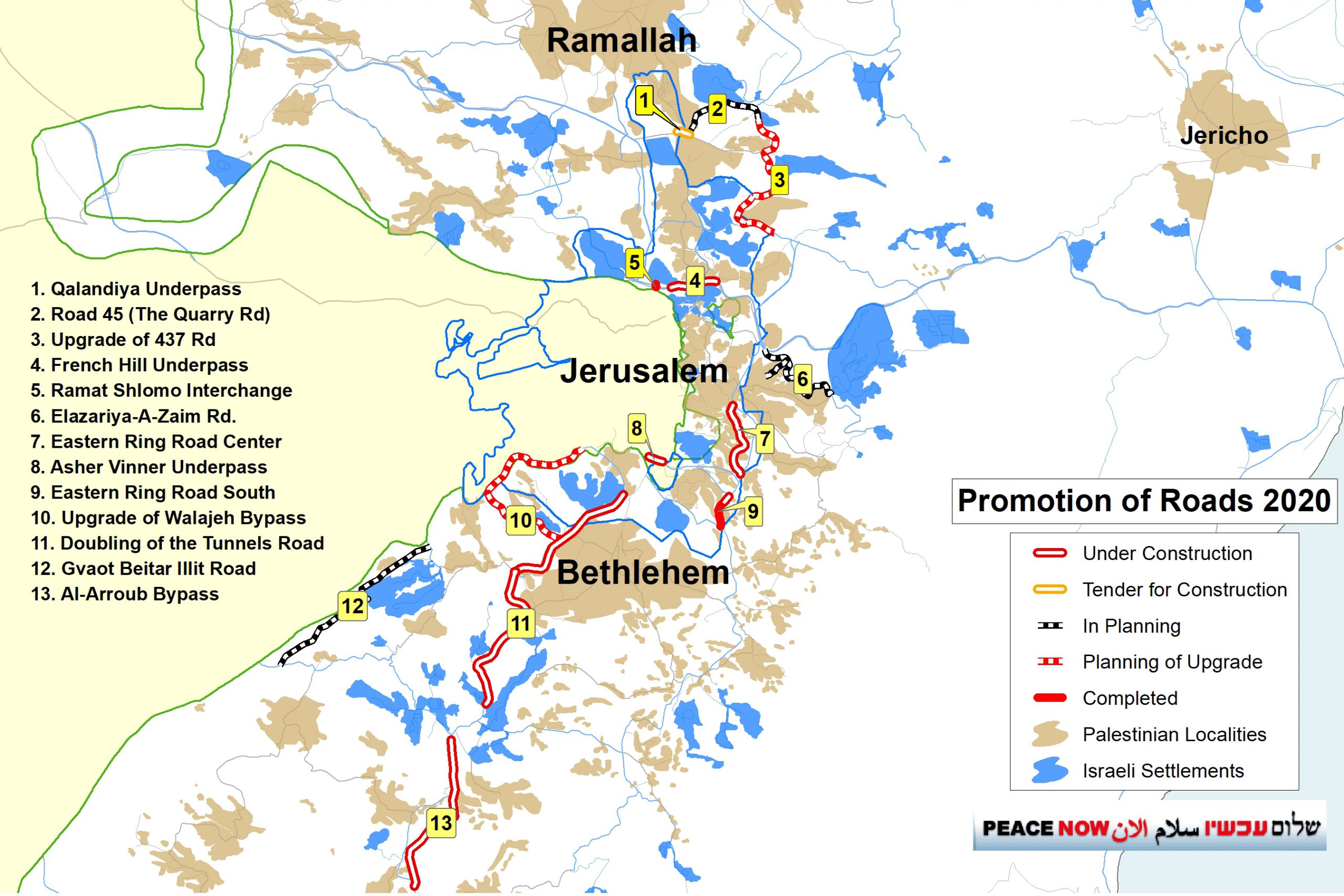 In 2020 intensive work continued on doubling the size of the Tunnels Road (bypassing Bethlehem to the west). This is one of Israel’s largest and most expensive projects currently underway in the occupied Palestinian territories. The current Tunnels Road suffers from heavy traffic and daily traffic jams. Doubling its size will also enable doubling of the number of settlers who will move to the Bethlehem area in the settlements of “Gush Etzion.”

In late 2020, work commenced on the Al-Aroub Bypass Road. The road is meant to bypass the Al-Aroub Refugee Camp and the Palestinian town of Beit Ummar, to enable faster and safer travel for settlers traveling south toward Hebron and Kiryat Arba.

Both the Tunnels and Al-Aroub Bypass Roads, intend to turn the road from Jerusalem to Kiryat Arba and Hebron into a two-lane road in each direction, without passing through any Palestinian communities. 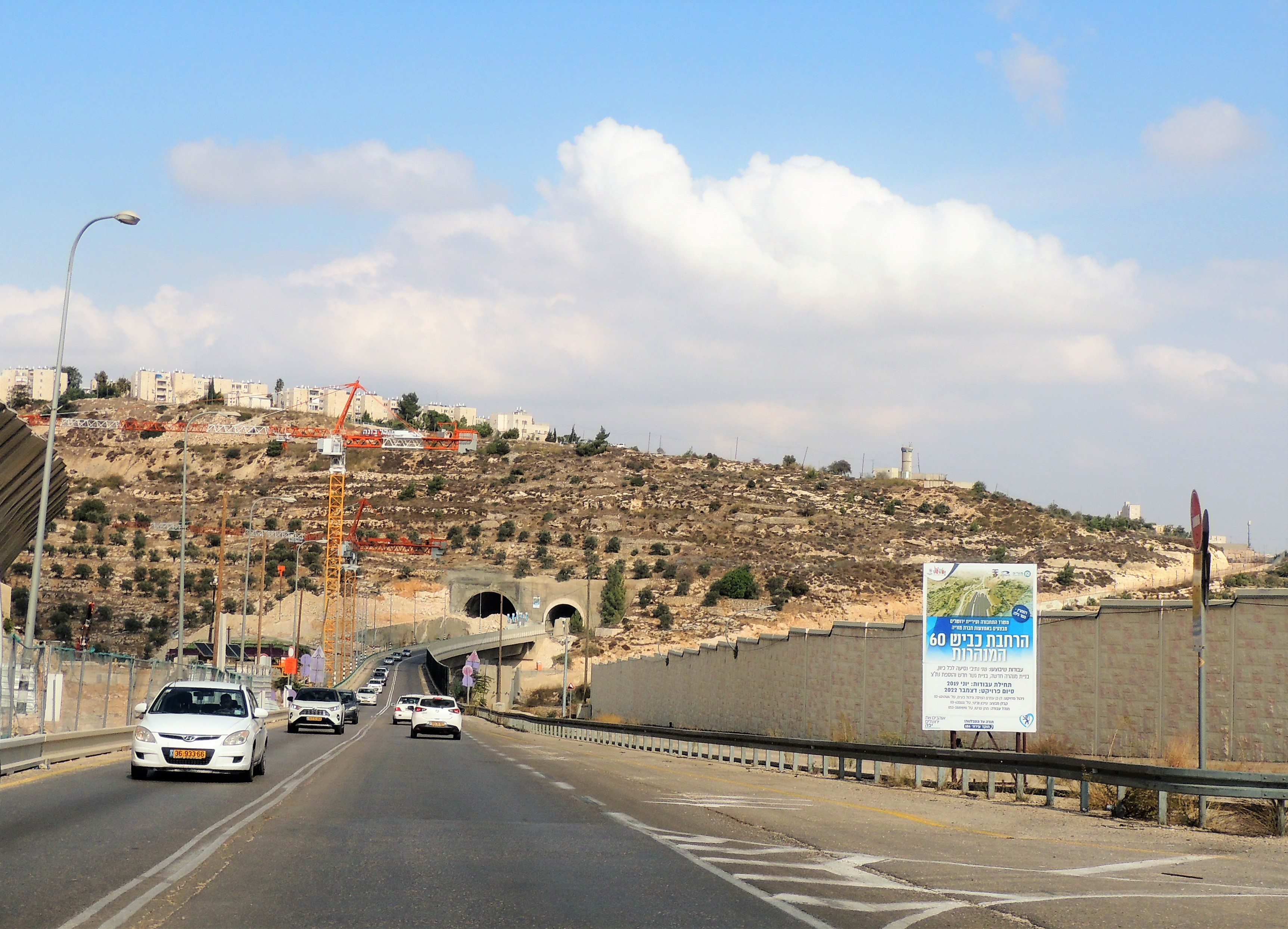 In 2020 a tender was published for the construction of the Hawara Bypass Road, and in 2021 paving work commenced.

Qalandiya Underpass (No. 1 on the map)

A tender was published in late 2020 for the execution of work on the “Qalandiya Underpass,” which is slated to commence in April of 2021. The Qalandiya Underpass is effectively a tunnel or underground passage beneath the Qalandiya checkpoint, which intends to enable settler traffic to pass through the West Bank into the Israeli road system without getting stuck in the traffic jams around Jerusalem neighborhoods. This will generate drastic spatial change in turning settlements near Ramallah northward, and in the Jordan Valley, into suburbs of Jerusalem. The road will allow a swift and convenient access into Israel, thus encouraging settlement expansion. A new bypass road called “The Quarries Road” is planned to connect the settlers to the Qalandiya Underpass without traveling along the Palestinian communities of Jaba’ and Ar-Ram. The plan for the “Quarries Road” was approved for depositing in 2020 (see below).

The prime minister decided to allocate NIS 14 million for the completion of planning and commencement of work on the Palestinian road between el-Azariya and a-Za’im (known as the “Fabric of Life Road” or “The Sovereignty Road”), intended to enable the annexation of Ma’ale Adumim and construction in E-1. The road is intended to divert Palestinian traffic, which currently passes along the settlement of Ma’ale Adumim, onto a bypass road, so that Israel can close off to Palestinians approximately 2% of the West Bank area (approx. 25,000 acres) in the Ma’ale Adumim area at the heart of the West Bank. In February, Minister of Transportation Miri Regev announced that a contract had been signed for the detailed planning and management of the project, along with the paving of the road. 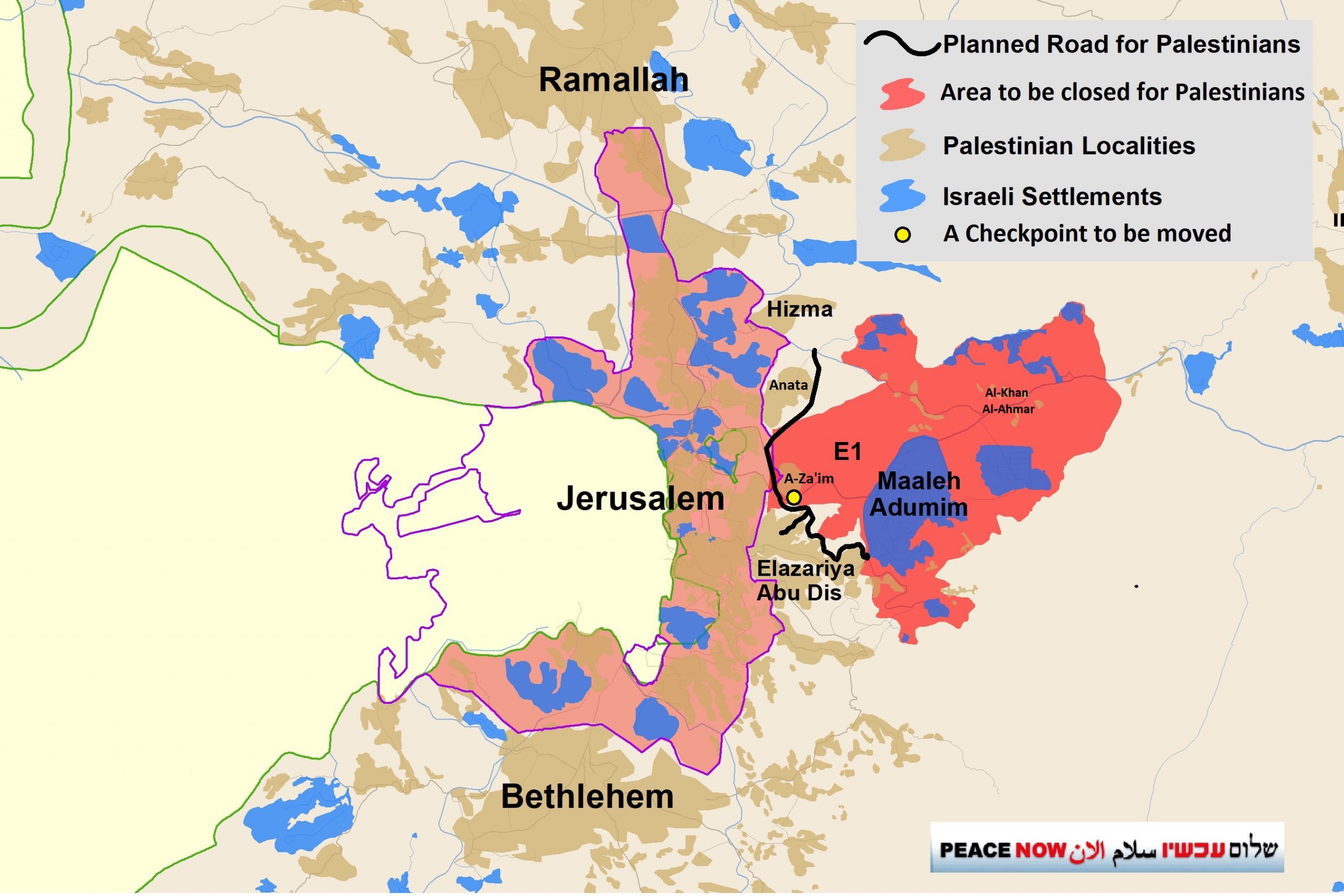 A statement issued just a few weeks ago by the mayor of Ma’ale Adumim on the progress of the road’s development, indicates its dramatic importance and impact on the center of the West Bank, and on Palestinians development potential. In the statement, the mayor of Ma’ale Adumim explicitly and callously articulates the policy of separation (not to say apartheid) behind the plan, and Israel’s genuine intention to detract central territory at the heart of the West Bank from Palestinian space.

Regarding changes in the area, the statement indicates that

“[…the road] will bring about the closure of the entrance to el-Azariya from the direction of the city [Ma’ale Adumim], advance the movement of the security fence between us and el-Azariya, and enable the shift of the a-Za’im checkpoint toward Mishor Adumim.”

“This is a separate road for Palestinians in the E1 area, intended to separate the transportation flow between the Palestinian and Israel populations in the area, such that Palestinian vehicles may travel without passing through the Ma’ale Adumim bloc near Jewish localities.”

That is, the purpose of the road is to separate Palestinian traffic along Highway 1, from Israelis and “Jewish localities” who will use other roads in separate areas. Palestinians will not even be able to pass through what is known as the “Ma’ale Adumim bloc.”

The statement goes on to explain the political implications of the road:

“Politically speaking, the road will connect Jerusalem to Ma’ale Adumim and enable construction in Jewish localities in the E1 zone.”

Ramat Shlomo Interchange (No. 5 on the map) and French Hill Underpass (No. 4 on the map)

Within Jerusalem, the Ramat Shlomo Interchange was opened to traffic, and work commenced on an underpass beneath the French Hill Junction in East Jerusalem. Both roads form a broad axis connecting Ma’ale Adumim to the Jerusalem-Tel Aviv road, and their completion will enable travel along a highway without traffic lights from the settlements around Ma’ale Adumim to Tel Aviv. 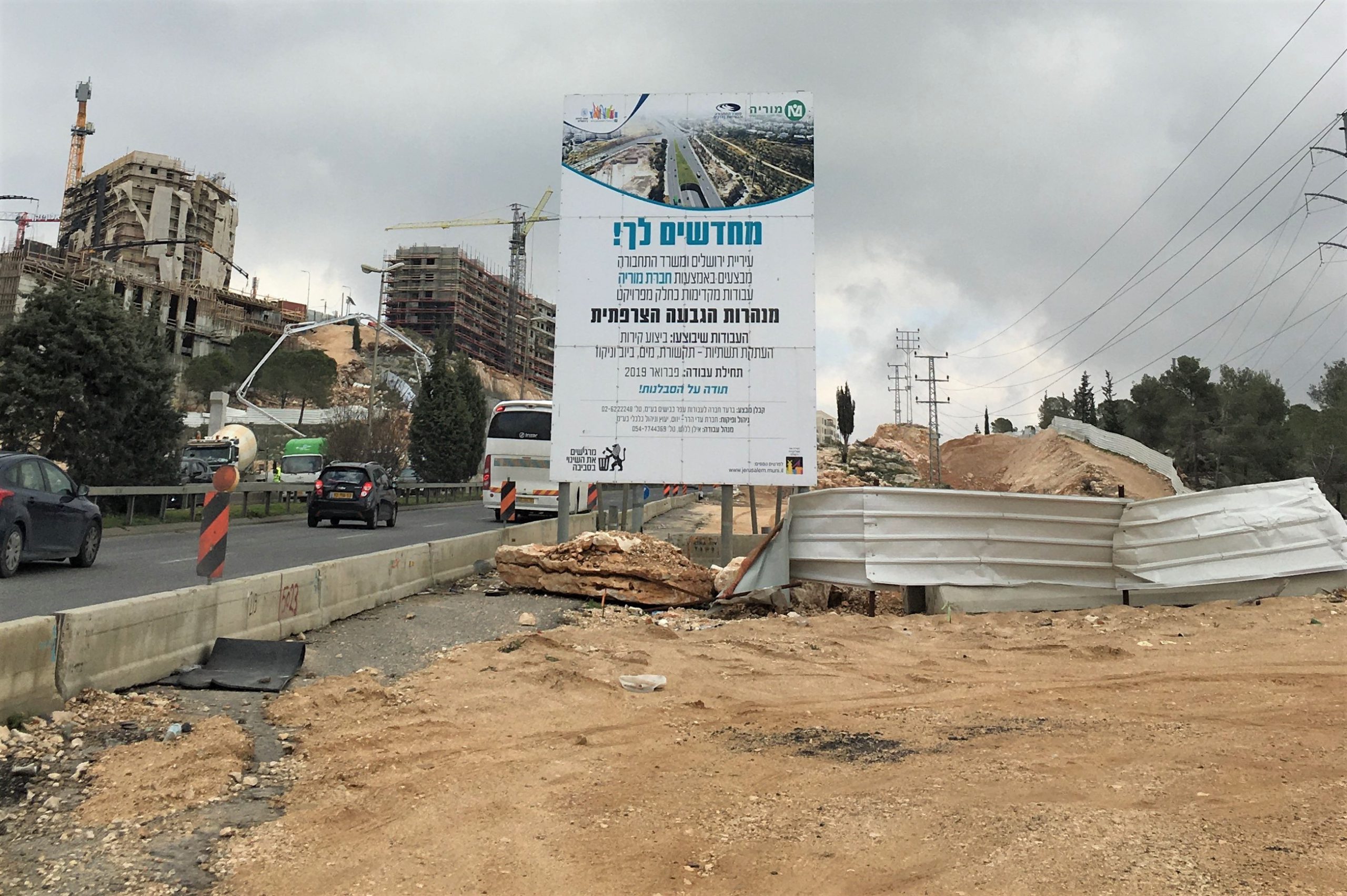 The works on the French Hill Tunnel, February 2020

The Eastern Ring Road (No. 9 on the map) and the Asher Wiener Underpass (No. 8 on the map)

The southern part of the Eastern Ring Road, called “The American Road,” opened to traffic this year and work on the massive bridge along it is nearing completion. Work has also commenced on the Asher Wiener underpass, beneath the Hebron Road in Jerusalem, intended to connect traffic from the settlements south of Jerusalem and in the Har Homa area to West Jerusalem via a highway along the new Eastern Ring Road.

The Eastern Ring Road essentially intends to bypass Jerusalem from the east, enabling settlers to travel from the Bethlehem area to the settlement around Ma’ale Adumim, and the settlements north of Jerusalem and east of Ramallah. The road will not be open to use by the Palestinian population (aside from Palestinian residents of Jerusalem) as it passes through an area within the separation barrier that has been annexed to Jerusalem, and may solely be accessed through checkpoints. 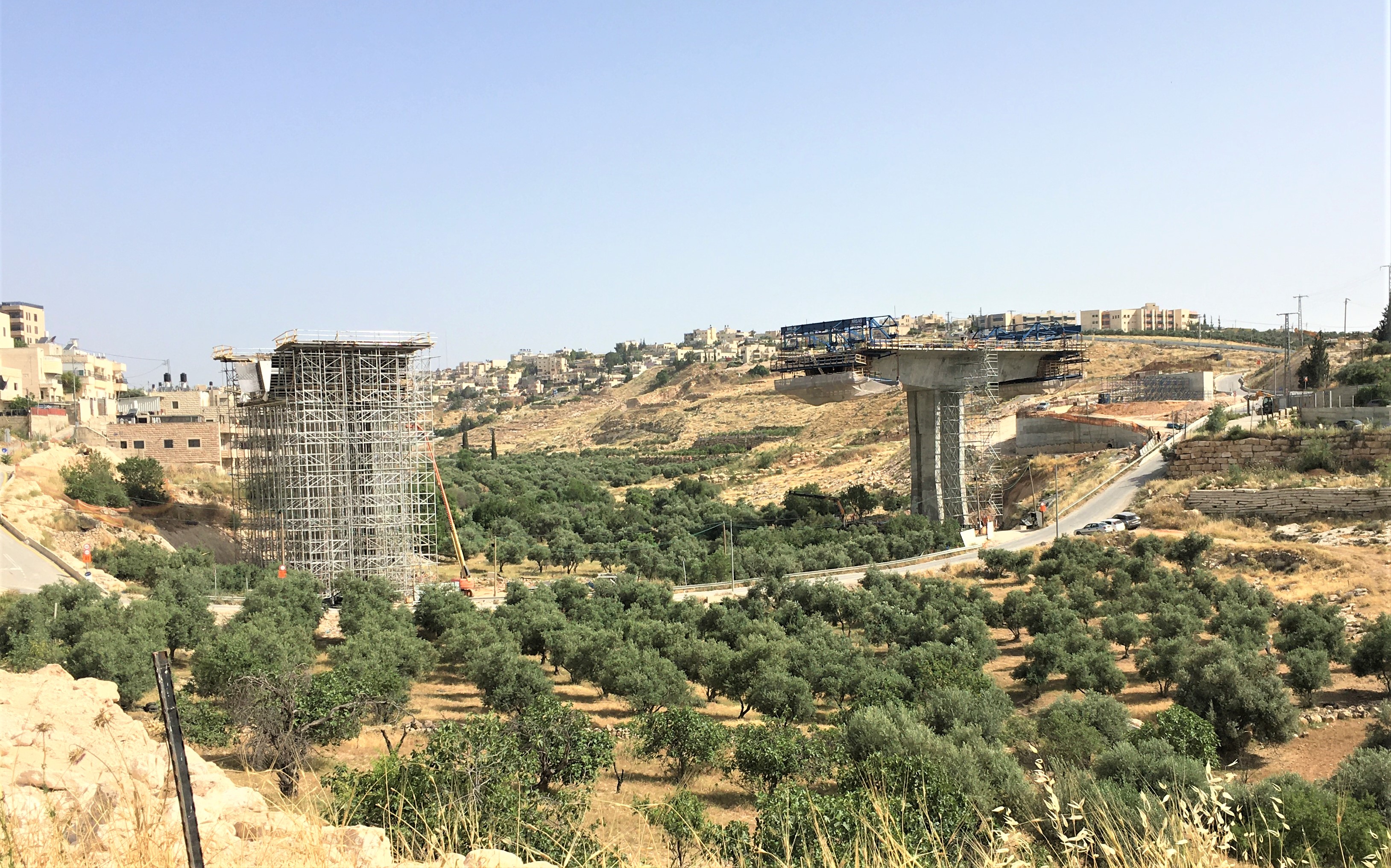 The construction of a bridge at the Eastern Ring Road, Sur Baher, East Jerusalem, May 2020

The Higher Planning Council of the Civil Administration approved the depositing of four plans for bypass roads to settlements:

the upgrade and the regularization of the existing road from Jerusalem to the Har Gilo settlement, bypassing the Palestinian village of Al-Walajeh. This plan is required in order to approve the plan for “the Camel Neighborhood” intended to double the size of the settlement of Har Gilo.

A new road planned to connect between the Ramallah Bypass Road near the settlement of Kochav Ya’akov and the Qalandiya area. Settlers will be able to use this road, bypassing the Palestinian villages of Jaba’ and Ar-Ram and to travel to Israel through the Qalandiya Underpass into Israel.

A plan for the expansion of road 437 between Hizma and Jaba’ to include two lanes in each direction and another public transportation lane. The plan was approved and recently a tender was published for the selection of a project manager to prepare the tender for the execution of work and the project at large, indicating that work may commence within the year. Another section of the road that runs through Jerusalem’s area of jurisdiction (on the Israeli side of the separation barrier) was also approved by the Jerusalem District Planning and Building Committee (plan no. 587618).

To read more on the infrastructural boom being furthered by the Israeli government in the occupied Palestinian territories, see Breaking the Silence’s report Highway to Annexation. 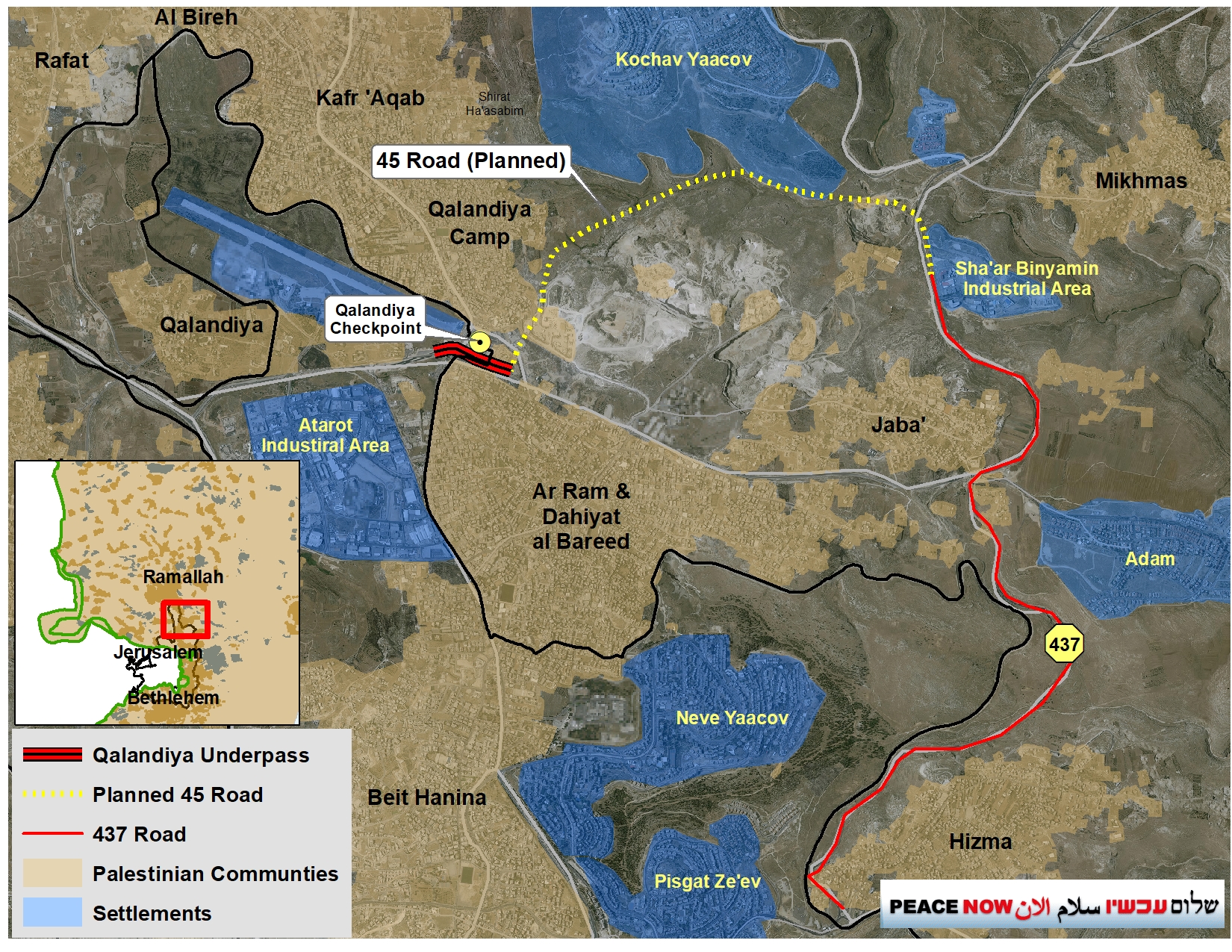