About two years ago, Peace Now revealed that the regional councils in the settlements transfer millions of shekels a year to Amana, a non-governmental organization that is considered one of the most powerful settlement bodies, working among other things to establish illegal settlement outposts. Following the exposure, Peace Now filed a petition to the High Court demanding that it stop the flow of millions of public funds to Amana. The court issued an order nisi (conditional order) in the petition and the hearing in it was set for 20 December 2020.

We now have new evidence confirming that these support funds were used by Amana for illegal activities, for the establishment and development of outposts. Documents obtained by the Movement for Freedom of Information show that in 2018, for example, the Gush Etzion Regional Council transferred NIS 3 million to Amana as support funds. These funds were used almost exclusively (excluding salaries and overhead) for such illegal activity.

So far there have been some indications of Amana’s involvement in the farms, but now it turns out that Amana is the one behind them, participating in their funding and accompaniment. The documents revealed indicate that the support funds from the Gush Etzion Council were used by Amana to finance 20% of the salary of a “farm coordinator”, who supports the establishment of agricultural farms in all of the West Bank. The documents also show that Amana invested, among other things, NIS 632,065 in the agricultural farm in the Makhrour outpost (“Nahal Heletz”), NIS 100,733 in the Tekoa farm outpost, and NIS 52,650 in the Pnei Kedem farm outpost  (for the purchase of a truck). 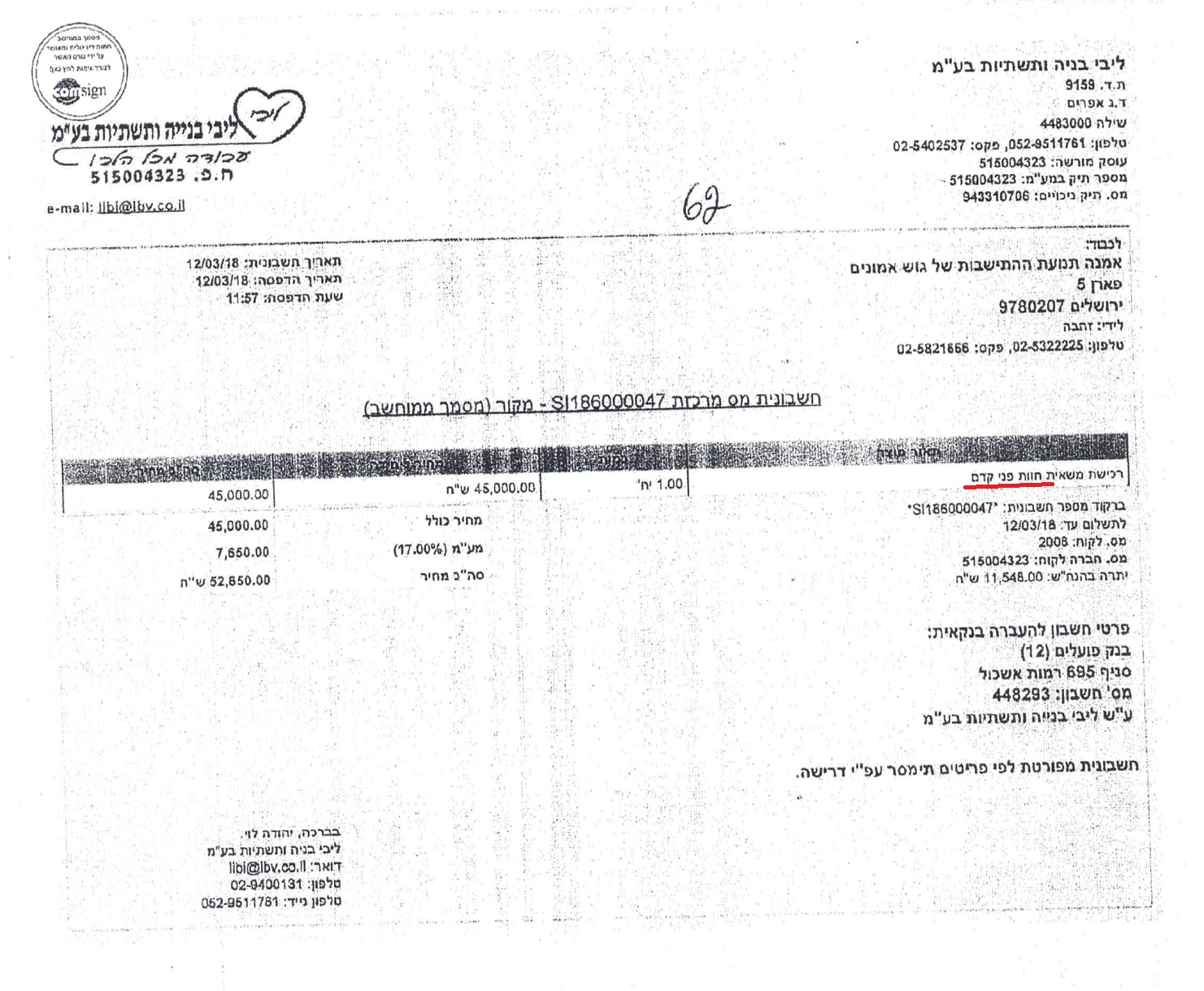 Services and construction in the outposts – In addition to the agricultural farms, reports by Amana to the Gush Etzion Council indicate that Amana is responsible for the care and maintenance of caravans in various outposts (including Kedar South, Sde Boaz, Pnei Kedem, and Ibei Hanahal and Givot before they were retroactively legalized). It is interesting to note that Amana owns many caravans and rents them out to tenants. The owner of the property is responsible for a caravan’s maintenance, but for some reason this maintenance is financed from public funds by Israeli taxpayers through the support funds of the Gush Etzion Council. 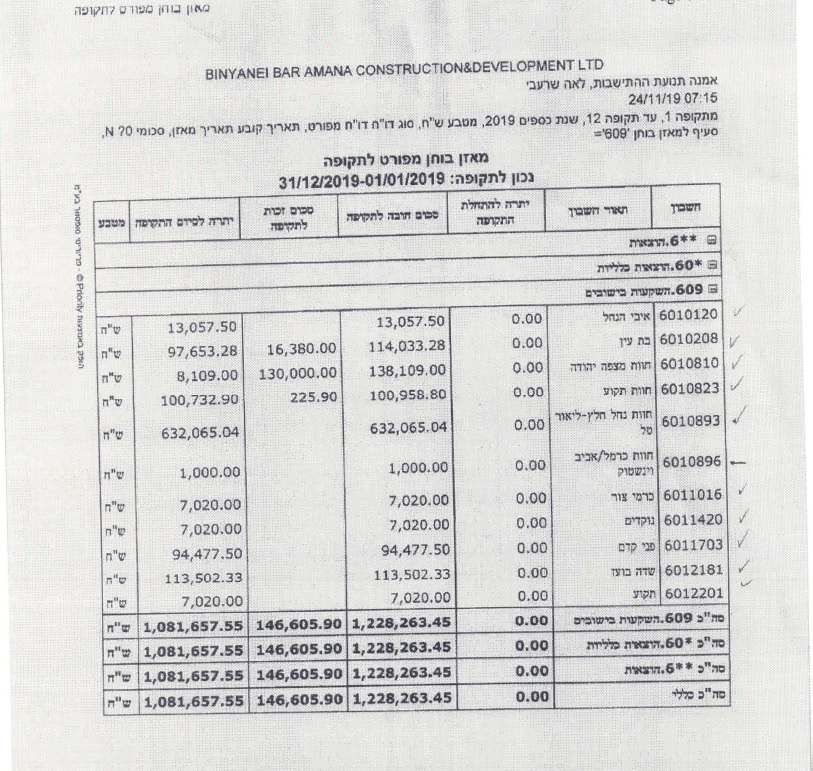 List of expenses by Amana, the majority being from illegal outpost activity

Hiding the full picture – the regional councils and Amana go to great efforts to hide the information about their financial sources and illegal activities. Even with the legal process in Peace Now’s petition against granting support money to Amana, the councils have refused to provide basic information on the amount of funds transferred to Amana and their use. Amana received tens of millions of shekels from the regional councils every year, and the information received about the activities in Gush Etzion in 2018 and 2019 is just the tip of the iceberg.

Peace Now uncovered the mechanism behind the illegal outposts in its “Unraveling the Mechanism behind Illegal Outposts” report which describes the operation by local authorities in the West Bank, together with Amana and the Settlement Division, to support illegal outposts and construction in the settlements, but not all financial sources have been clarified. The support by the Gush Etzion Regional Council is only a small part of Amana’s multi-million shekels operation in this illegal activity, with far-reaching ramifications for Israel’s future.

The main activities reported by Amana in 2018: 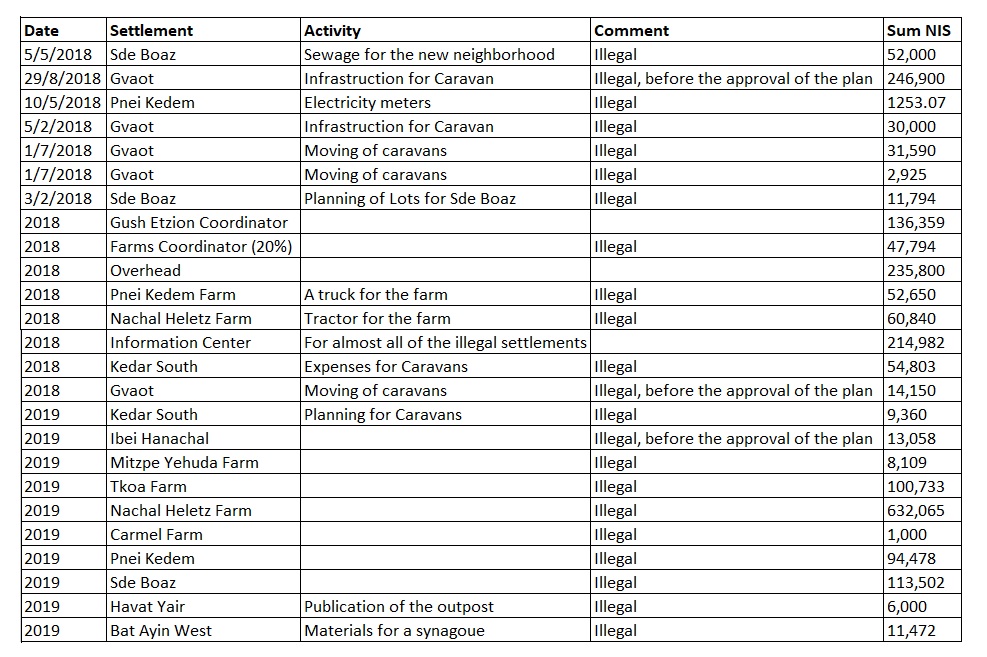