The HPC of the Civil Administration approved most of the plans that were on the agenda except for two that were postponed.

Plans for regularizing three outposts were approved – discussion of the Brosh outpost was postponed because no resolutions had been made on the objections submitted (including an objection from Peace Now).

Some of the plans are designed to legalize illegally constructed buildings in the settlements (see below).

Plans not discussed (and postponed):

Program for regularizing the Brosh outpost as an educational institution – a decision has not yet been made on objections submitted regarding the plan and the discussion on it was likewise postponed.

88% would be deep in the West Bank

Following the Cabinet’s decision last week to promote the construction of 6,000 housing units in the settlements alongside 715 housing units for Palestinians, the Higher Planning Committee of the Civil Administration convened on Monday and Tuesday (August 5 and 6) to advance a series of settlement plans.

Peace Now: The approval of settlement plans is part of a disastrous government policy designed to prevent the possibility of peace and a two-state solution, and to annex part or all of the West Bank. The linkage of thousands of housing permits for settlers and a negligible number of housing units for Palestinians cannot hide the government’s discrimination policy. As a result, we see for example an approval of the illegal outpost (Haroeh Haivri) built for Israelis adjacent to the Palestinian bedouin village of Khan Al-Ahmar, for which the government refuses to approve any construction permits and instead seeks to transfer. Or we see, the approval of the construction of a new settlement neighborhood adjacent to the separation barrier after demolishing 72 housing units built adjacent to the separation barrier in Wadi Hummus, despite offering to fund security measures.

The four outposts originally slated to be legalized
The plans being advanced also include plans to retroactively legalize (“regulate”) four illegal outposts. Two weeks ago, Peace Now released a report revealing that under Netanyahu’s rule more than 30 new settlements (“outposts”) have been established, along with continuing retroactive legalization of existing outposts.

The legalization of outposts, including those that have been established in recent years, sends a clear message from the government that it is worthwhile to build settlements illegally, because the government will approve them retroactively.

The four outposts to be legalized are as follows:

One of the plans that was approved is Plan No. 208/3/1 in the settlement of Ganei Modiin for 194 housing units. In the late 1990s, Israeli entrepreneurs who purchased the area prepared a building plan for 250 housing units that were promoted and approved for deposit. However, due to the intention to build the separation barrier in the plan area, it was decided not to approve it (See in this regard, the judgment of HCJ 2577/04 of the residents of Na’alin against the route of the fence).

The new plan permits the construction for 194 units up to the completed portion of the separation barrier there. Recall that just two weeks ago, Israeli authorities demolished 72 housing units in Wadi Hummus (in Area A and B) east of Jerusalem, claiming that they were built adjacent to the separation barrier and posed a security threat. Residents offered to fund a high wall that would meet Israel’s security needs but their application was rejected and the houses were demolished.

Despite this inconsistency, the authorities decided to approve the construction of this plan in Ganei Modiin. The developers agreed to fund the building of a high wall for security purposes, thus resolving the matter. 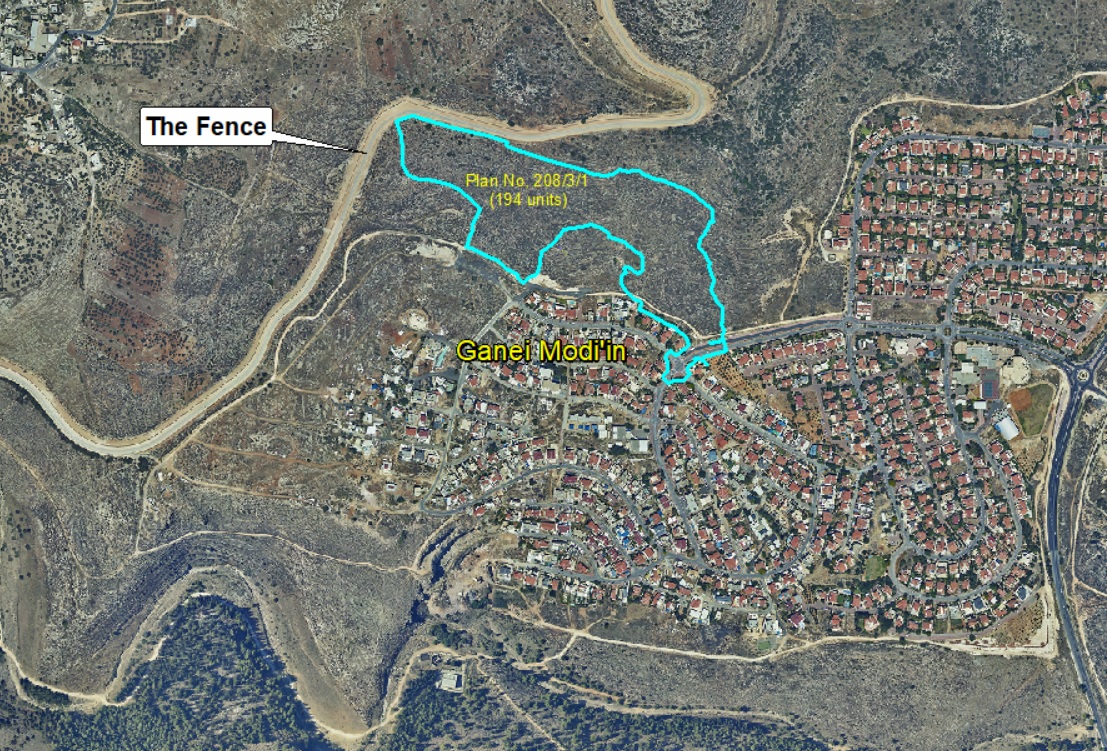