Construction Plans for Palestinians
The promotion of housing units for Palestinians in the Occupied Territories is a rare occurrence, as plans and building permits for the Palestinian population have hardly been promoted for years.

During a hearing in one of the Knesset committees a year ago, Former Advisor to the Defense Minister Kobi Eliraz’s stated that the policy is not to promote any construction for the Palestinians (see quote below).

For example, in 2014, only one (1!) Palestinian building permit was granted for Area C, and in 2013 just four permits were granted. In 2016 there were 37 permits approved but 35 of them were initiated by the Civil Administration in order to show the Supreme Court that the alternative homes for the evacuation of the Palestinians of Khan al-Ahmar are being promoted (so those permits were actually made for enabling the destruction of Palestinian houses). According to data obtained from the Civil Administration, in the eight years between 2009 and 2016, a maximum of 66 Building permits for Palestinians were approved (out of 3,365 applications for permits that were filed). It should be noted that these building permits may not only be residential, but may also include building permits for road construction, pipe laying, or agricultural structures.

During the same period, 12,763 housing units (according to CBS data) began to be built in the settlements. 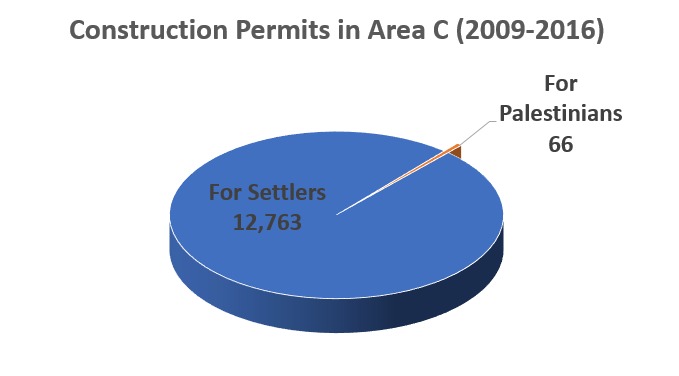 Promoting 700 housing units for the Palestinians is a mockery because the need is far greater. The Palestinian population in Area C is estimated to be between 200,000 and 300,000 (which is also because Israeli policy does not allow construction and development in the area). As a result, it is estimated that there are at least a thousand young Palestinian couples in need of housing in Area C each year, so the decision to promote about 700 units for them will not provide real answers to Palestinians who already live in Area C, and certainly will not help the entire West Bank to be developed as a Palestinian area. 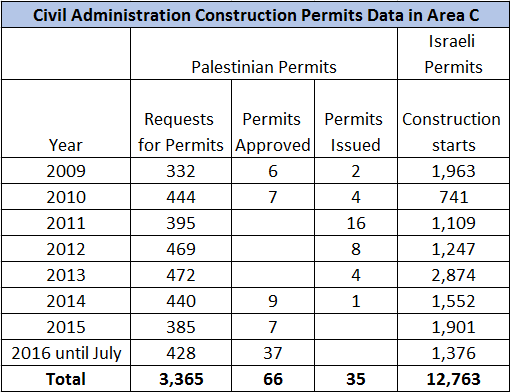 Promotion of Settlement Plans
Regarding the construction for settlers, it has been always the policy of the Israeli government and especially since U.S. President Trump entered the White House, according to which every four months the Higher Planning Committee convenes in the Civil Administration and advances thousands of housing units.

Details of the plans are not yet fully known, but so far a partial agenda has been published in the Civil Administration. However, from the few details published and from past experience in recent years, it is estimated that most of the plans are deep in the West Bank in areas that Israel will have to evacuate in order to achieve a two-state final agreement. 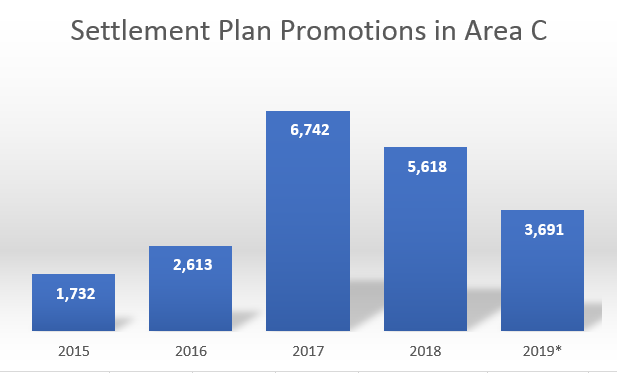 Analysis: The true intention of granting permits for Palestinians

The most concerning part of the recent statements by some of the cabinet members is that these construction permits for Palestinians are part of a plan toward extending sovereignty over Area C and preventing the establishment of a Palestinian state.

If until now it was clear, according to the Oslo Accords, that the designation of Area C is temporarily under the responsibility of the State of Israel until a political agreement is reached, today Israel has made it evident that it will decide where the Palestinians will build and where they cannot, and that any such building will be subject to the whims of the settlement agenda.

“In the last ten years, since the launch of the Fayyad program, the Arab vision of establishing a terrorist state in Area C has been fulfilled in practice. An area under full Israeli security and civil responsibility”

“For the first time, the State of Israel will make sure that in Area C, there will only be construction for the Arabs who were original residents of the area since 1994 and not Arabs who came later from Areas A and B.”

“For the first time, the State of Israel will determine in a clear and unmistakable manner that original inhabitants of the area will be able to build and develop only in places that do not harm the settlement enterprise and security, and do not create territorial contiguity or a de facto Palestinian state. Places that do not serve the national interests of the Arabs, rather the national strategic interests of the State of Israel.”

“For the first time ever, the State of Israel will implement its sovereignty over the entire territory and take responsibility for what happens inside it. Gone are the days of construction plans pushed by the PA that serve its interests. For the first time, the State of Israel will create a tool basket for real enforcement that will be enacted to neutralize the Palestinian takeover plan.”

As argued by officials, the reason for the plan is to improve construction promotion statistics for the Palestinians before the High Court and to mollify international criticism of the Israeli government for failing to promote Palestinian construction in Area C.

And so the former adviser to the defense minister, Kobi Eliraz, explained the interest in approving the Palestinian construction permits at the Knesset’s Foreign Affairs Committee on 1 November 2018:

“We come across hundreds of petitions that Palestinians file against the enforcement, demolition, of their homes. For that, we have tried to refine and look a few steps forward. Among other things, I also cautiously say that it would have been good if we had also approved some of the Palestinian permits in Area C, especially in places they already have cultivated or which are close to Areas A and B.

We do not currently approve [Palestinian construction]. On some level, when everything is forbidden, everything is allowed. The High Court is also hassling us about this and is having a hard time backing us up on demolition … because it also asks us how many plans you have approved in the vicinity or area lately and when our answer is not satisfactory, then we also do not get enough backing from the court. We think this should be included as well.”

The goal of the construction plan is ultimately to serve the settlers, and not out of some sincere concern for the needs of the Palestinian population. The Israeli government is making a significant step toward annexing and applying sovereignty over the territories, and thereby severely damaging the prospect of reaching a political agreement to end this occupation of more than 52 years.

One more note about Area C:
Area C was delineated in the Interim Agreement between Israel and the Palestinians in September 1995 (“Oslo B”) and was intended only for an interim phase, to be followed by an agreement May 1999. The border between the Palestinian-controlled areas (Area B) and the areas under control Israeli (Area C) was then determined by aerial photographs from those days. The map at the time outlined the perimeter of the houses that were built in those days, with almost no additional areas for future expansion. From 1995 to the present day, the boundaries of Areas A, B, C have not changed, creating an absurd situation whereby some of the Palestinian communities are “surrounded” in Area C and cannot expand with new construction or even infrastructure without Israeli approval, which as established above is rare. For example, see the villages of Sarta and Bidya, which are surrounded by Area C, which have since expanded into Area C without permits because it is near impossible to obtain them from Israel: 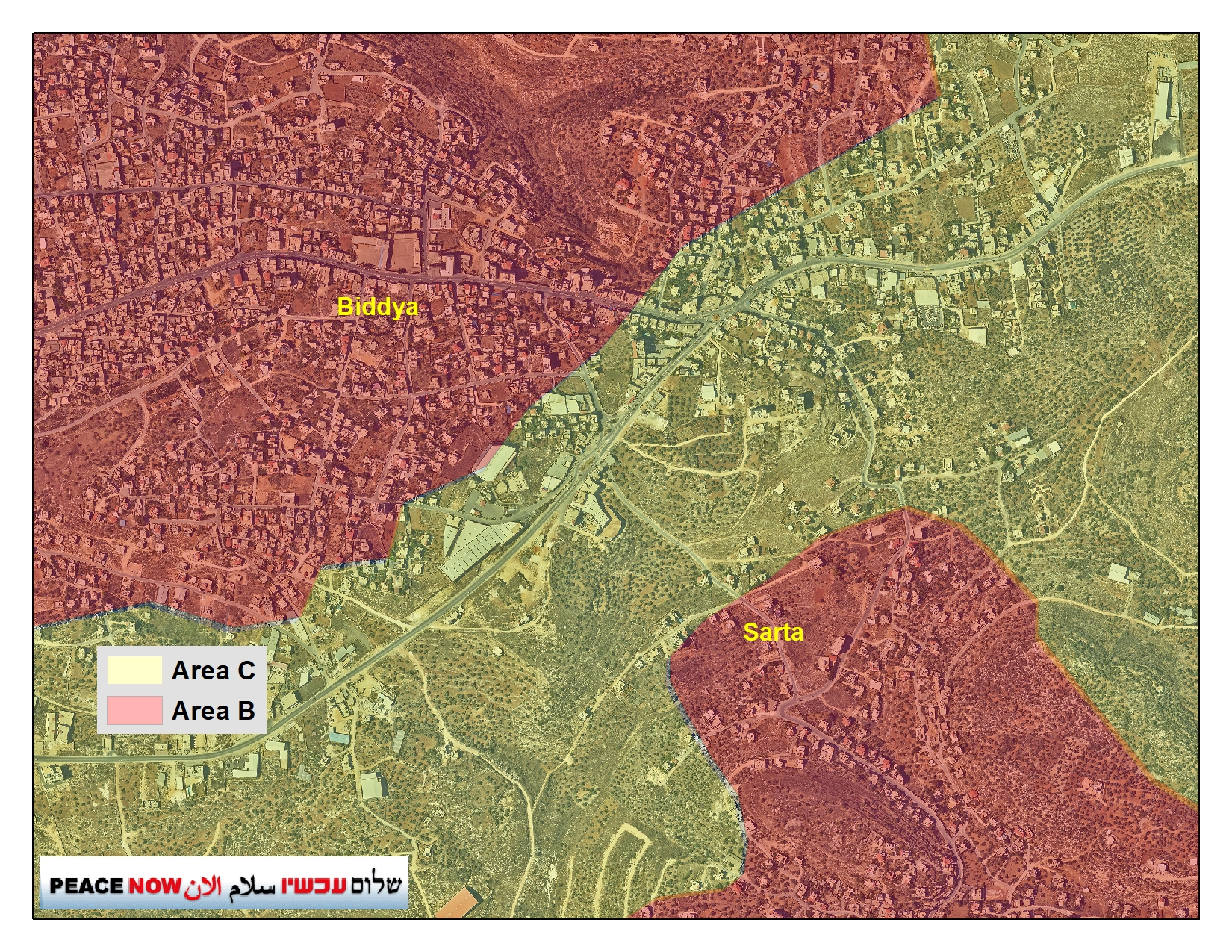