What is Ulpana Hill?
Ulpana Hill is an outpost also known by the name Jabel Artis. The outpost has 14 permanent buildings with 6 housing units each (a total of 84 housing units). The outpost was built on private Palestinian land outside of the municipal boundaries of Beit El and outside of the military seizure order. Twenty-five caravans were also erected next to the buildings.

When construction began, the Civil Administration issued demolition orders against all of the buildings (in 1999 and again in 2002 and 2003) but the builders ignored them and continued building. When the petition was submitted to the HCJ five of the buildings were still under construction, and in order to make evacuation more difficult, the settlers hurried to move into the houses and establish facts on the ground. 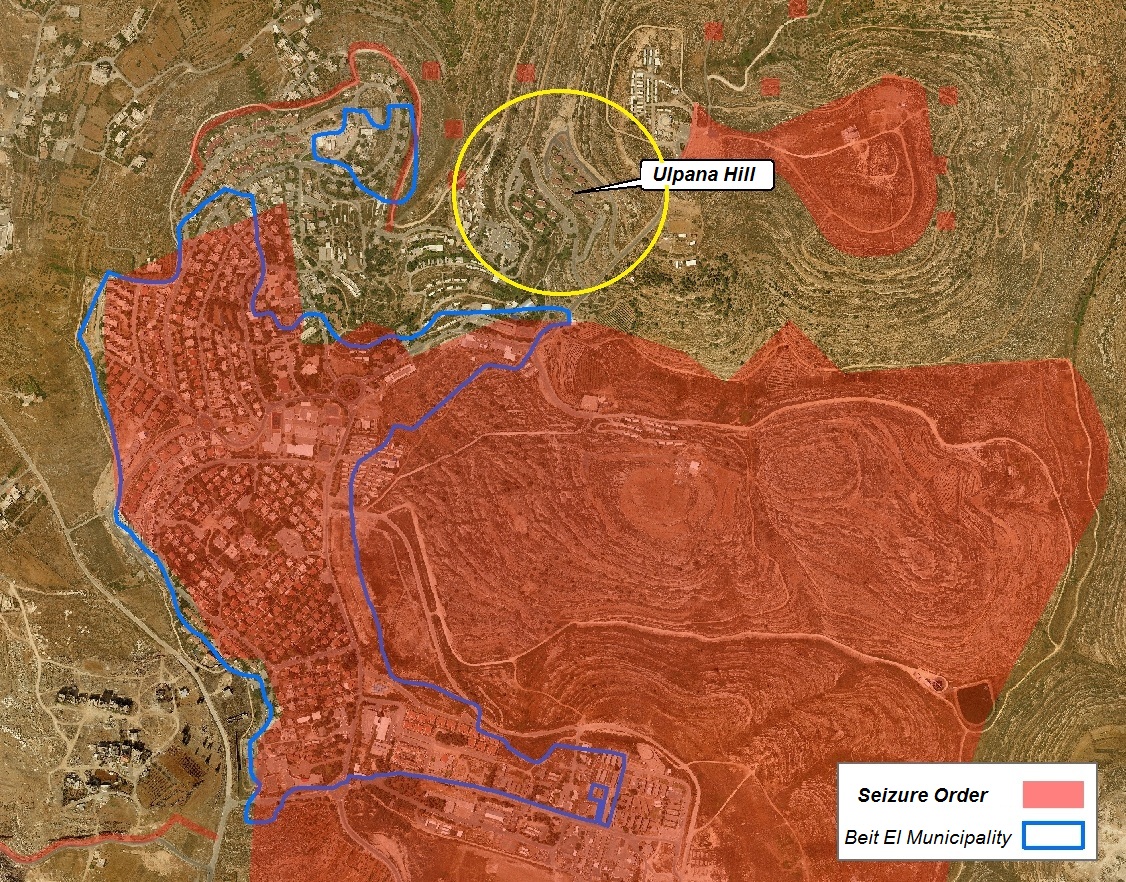 The settlers claim they own the land. Is that true?
The acquisition documents the settlers presented turned out to be false. The person whose name is signed on the documents is not the owner but has a similar name to the owner’s. Therefore the Civil Administration refused to register the land under the settlers’ names and the police opened an investigation on suspicion of forgery. The investigation found that the aforesaid seller tried to change his name in the population registry so that it would be identical to the name of the owner and that he was seven years old when the land was registered in the name of the real owner, so that he could not possibly be the owner.
It should also be noted that even the settlers do not claim ownership of all of the land on which the buildings were built but only on one of the plots.

Why did the High Court intervene?
In 2008, when five of the buildings were still under construction, the land owners petitioned the High Court of Justice with the help of the Yesh Din organization, demanding to stop the building and evacuate the five houses as well as another five caravans that were placed nearby. The government checked and accepted the petitioners’ arguments and informed the court that it would evacuate the buildings by May 1, 2012. In September 2011 the HCJ ruled that due to the state’s commitment to a specific date, the petition had reached its exhaustion.

On April 27, 2012, three days before the intended evacuation, the state made an unusual motion to the court to reopen the file and allow the government to conduct a new background study and reconsider the question of evacuation. On May 7, 2012 the court rejected the motion and ruled that the state must demolish the buildings by July 1, 2012.

From the HCJ ruling: “Besides considerations of the finality of the hearing… there is also the basic principle of executing verdicts. This basic principle guarantees that the judicial proceeding is not in vain but that its outcome be carried out in practice and within the time frame decided by the court. Without that basic element the legal proceeding would be thwarted. All the more so when the verdict must be executed by the state.

Who lives in the houses?
During the hearings on the petition it emerged that most of families living in the apartments are renters. The evacuation will cause those families to end their contracts but not to lose homes they own. Nevertheless, it looks as if the government is trying to find them alternative housing at the state’s expense. 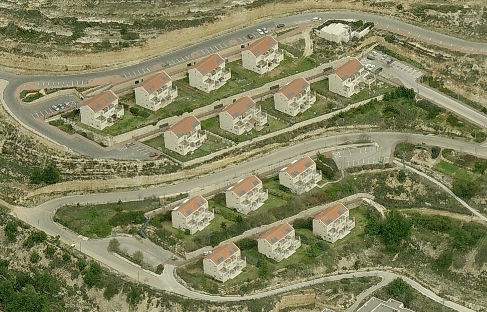 The claim in the District Court
In an attempt to delay the evacuation, two days before the HCJ hearing in September 2011, Amana, the Yeshiva Campus Development Company and others filed a claim with the District Court demanding the land be registered in their name. Two days later they asked the HCJ to postpone its decision on the petition until the preceding in the District Court was completed (which can take years), but the HCJ rejected their motion.

It was a futile claim meant to buy time, to create the impression in the public that the affair was still pending in the court system and prevent the evacuation. The claimants refrained from disclosing to the court that an investigation had opened into the matter and that there was a hearing at the HCJ, and that construction had also been performed on a plot of land to which there was no claim of purchase.

Furthermore, the settlers had claimed that they bought the land as early as 2000, but for all those years refrained from going to court even though the Civil Administration had refused to accept the purchase documents as credible years ago. Only after the proceeding began in the HCJ did they submit their claim which, again, is based on documents that not only had been rejected by all competent authorities in the past, but were also the subject of a police investigation.

Seemingly false registration in order to obtain a mortgage
In light of the Supreme Court’s final decision, one of the only families that is not renting but which managed to buy its apartment petitioned the HCJ in an attempt to prevent the demolition (and later changed its mind and dropped the petition). Among the documents submitted to the HCJ was the family’s contract with the Yeshiva Campus Development Company who built the houses, according to which the World Zionist Organization’s Settlement Division gave the company the rights to the land, even though the house had been built on private Palestinian land to which the Settlement Division has no rights. Based on that contract, the family received a mortgage from Bank Tefahot. The Settlement Division’s reaction in the press indicates that the lot number that appears in the contract is the number of a lot in another neighborhood of Beit El, which is to say that the registration appears to be false. It should be noted that the Yeshiva Campus Development Company itself received many mortgages from Bank Tefahot in exchange for mortgaging 36 properties on different lots in Beit El.

Why is the “Regulation Law” bad for democracy?
The “Regulation Law” is an attempt by right-wing lawmakers to retroactively cancel a Supreme Court ruling and pass a law that would allow the settlers to continue to occupy private Palestinian land. According to the draft law, in cases of construction on private Palestinian land in the territories, if the builder honestly thought he was the landowner, he will be considered the land owner. And if the government had encouraged the construction in any way, the land would be considered state land.

If the law passes it will be a fatal blow to democracy and the rule of law. The settlers are trying to cancel court decisions by law when they do not serve their political ends, and create a separate law would apply only to the territories. Such a law would explicitly legalize land theft. Furthermore, the law is aimed at directly affecting the Palestinians in the territories even though they are not citizens and cannot participate in elections and influence the legislative branch.

Ulpana Hill, Migron and the other outposts are the test of whether Israel is a democratic state or the state of the settlers, and whether the rule of law applies to everyone or the settlers are the masters of the land.