It is not a coincidence that Elad chose this place which is part of its settlement efforts in East Jerusalem. The Free Jerusalem group are activists in Jerusalem that called on Zappa to cancel its collaboration with the Elad Association. Following this outcry, Zappa removed its logo from the event and stated that it would not get involved in events like this in the future. Two of the artists, Arkadi Duchin and Danny Robbas, cancelled their shows.

The Elad Association has been targeting the Hinnom Valley as an area for touristic atractions in order to attract Israelis to visit the area and to use it as a corridor between West Jerusalem to their settlement projects deeper in Wadi Hilweh and Silwan. On June 30th, 2020, Elad settlers took over another house in Wadi Rababeh, connecting them to Wadi Hilweh (see more here). 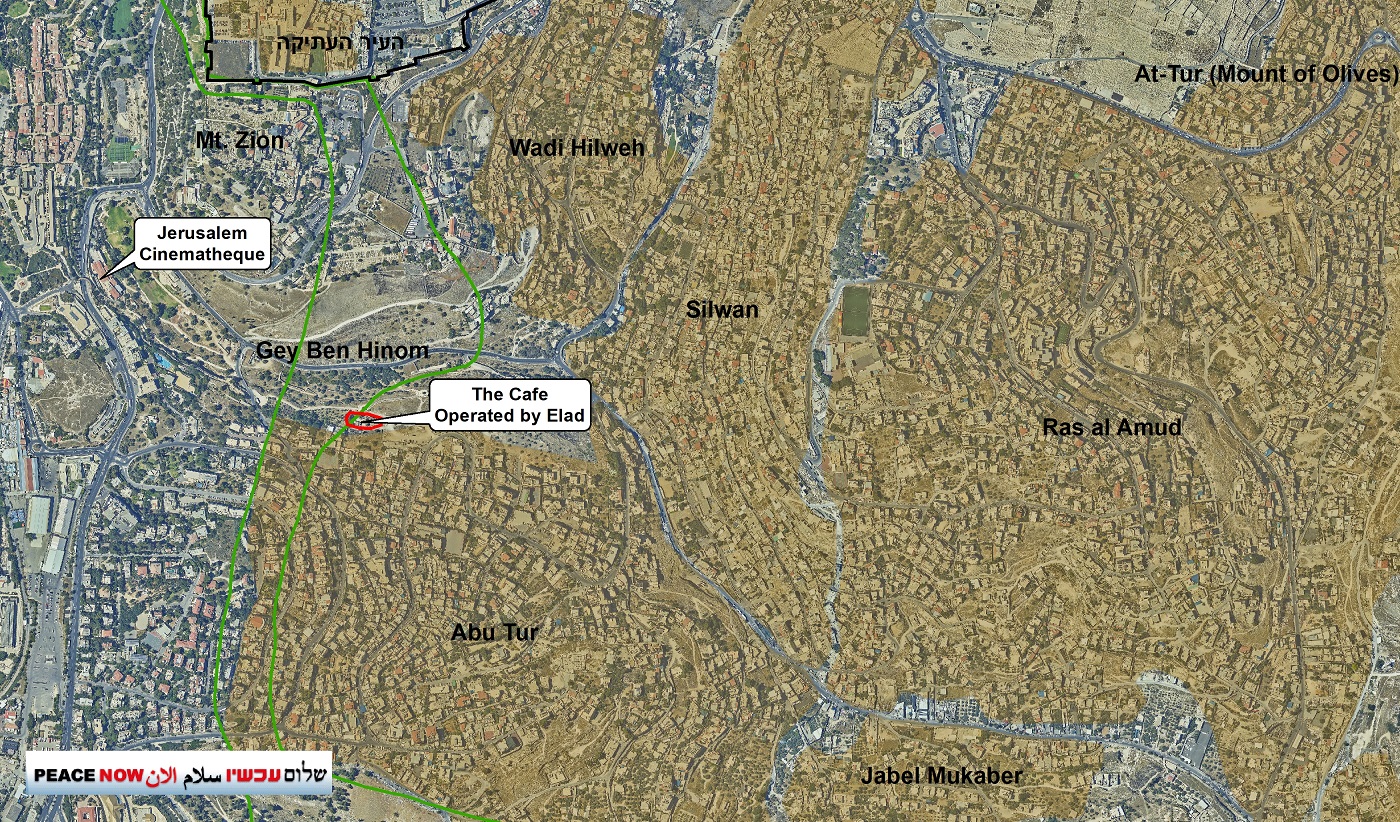 The cafe is located approximately half a kilometer from the Jerusalem Cinematheque and just tens of meters from the houses of Palestinian neighborhood Abu Tor. It is not a coincidence that the Elad Association, who built its settlements in the heart of Palestinian neighborhoods in East Jerusalem, chose this site for a tourist attraction. Strategically, the area of the Ben Hinnom Valley connect Silwan to the Green Line and to Jewish neighborhoods in Jerusalem. Throughout the past few years, the Elad Association has tried to grow tourism to the area and bring visitors to Palestinian areas around the Old City of Jerusalem. They were involved in plans and projects to develop the area that later became official governmental projects through Jerusalem Development Authority (JDA). Two years ago the JDA got a permit to build a pedestrian bridge from Elad’s Cafe, to the northern side of Wadi Rababeh at the slopes of Mt. Zion. Peace Now, together with Emek Shaveh appealed against this permit but a few months ago their appeal was rejected.
The Elad Association’s settlement in the Ben Hinnom Valley is meant to connect tourists to other Elad sites in Silwan and encourage them to complete their visit with a trip to their cafe just south of the Old City. The cafe is beyond the Green Line along the border of the territory that was a “no man’s land” between Jordan and Israel until 1967. The Elad Association invests tremendous resources in tourism projects that have become an integral part of the Jerusalem settlements. More on the expansion of Jerusalem touristic settlements, click here.

Controversial Purchase — from someone who was not the owner

As in many other instances, the way that the Elad Association gained control of the property is questionable. The Palestinian landowners filed an eviction lawsuit against Elad which is going on for several years and is still pending. The property is approximately three dunams with a small structure (of approximately 50 meters).

One of the big difficulties in East Jerusalem (that settler associations take advantage of) is that almost all of the land is not registered in the tabu (the land registration office). This means that the existing records are only partial (property taxes, known as malia) that legally do not demonstrate conclusive evidence of property ownership. Every time there are contradictory claims of land ownership, the landowners are expected to undergo a legal process to prove their ownership (The papers in their hands themselves are not enough). Landowners are forced to bring documents from the era of Jordanian rule or even from the era of Turkish rule to prove the validity of their property claim.

In exactly this situation the Elad Association succeeded in remaining on the property in the Ben Hinnom Valley. According to the Elad Association, it purchased the plot from a Palestinian prisoner who claimed to have lived in the area for several years but never owned the land. As far as Elad was concerned, it bought the land from the person living on the land and that was sufficient. However, the landowners (and there is no dispute that they are the owners of the other buildings on this land plot) were required to persuade the court that the landowning documents in their hands (from the Ottoman era and in the property tax books) were sufficient to prove that they own all of the plot including the three dunams taken by the settlers. The lawsuit was filed in 2011 but the deliberations dragged on for more than eight years and continue today.

Last year, the Palestinian prisoner that sold the land to the Elad Association testified in court. He stated that he remembered the land as a child as a place where the neighborhood children would play and his father worked in the fields with the landowner. According to him, after experiencing financial difficulties, he decided to move to live on the land with his six children. The city issued a demolition order for the small structure that he built and imposed heavy fines on him and his family. He was later put in jail and his family’s financial situation continued to worsen.

Under these difficult circumstances, a Palestinian broker appeared and offered to help him and buy the land from him.

“I didn’t lie to the broker that this is my private land, as I said here. He told me ‘No problem, why do you care? I will take care of it.’ He agreed that he was buying in “a dirty way”. I told him the whole story.”

The prisoner testified that the broker sent him a lawyer to the prison that signed the deal in front of him for $120,000 (he claims the broker still owes him $50,000 that he has not paid yet).

The deliberations in court have still not been resolved, but the method that this happens can already be identified: settlers take advantage of a Palestinian family’s adversity where the father in imprisoned and the family is under threat of house demolition from the municipality and heavy fines. Then the settlers find a Palestinian broker that will sign the agreement so that it was technically not sold to Jews. The settlers can’t deny that the person who sold them the property is not the owner. They already took control of the land. Now the Palestinian landowners need to prove that they are the owners, to invest a lot of energy and resources into long deliberations in the court and in the meantime, the settlers can establish a settlement on the land instead. 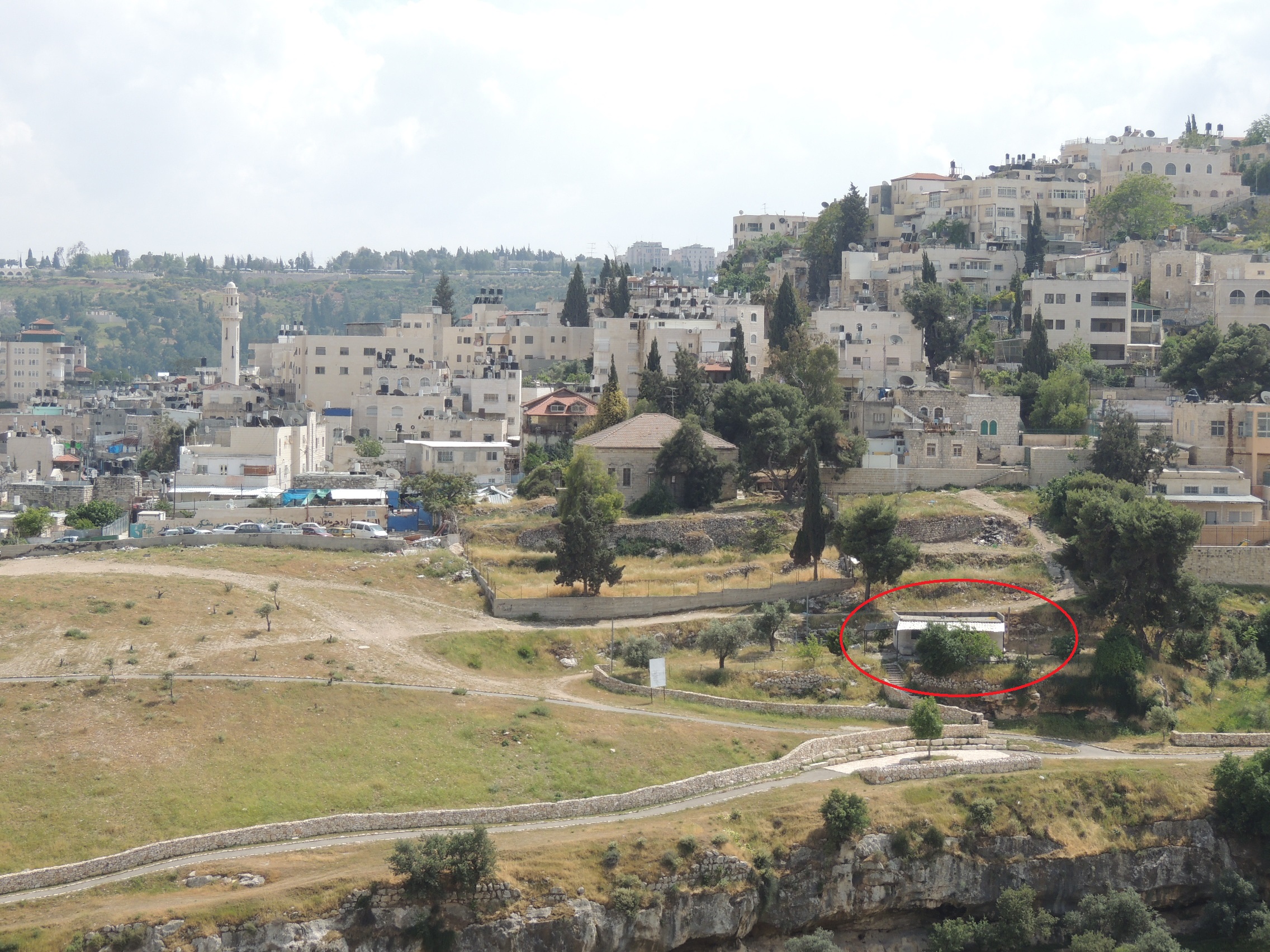 The house the settlers claim to have bought and uses as a coffeehouse, and the Palestinian Abu Tor neighborhood, 2013