The Jerusalem District Court this week rejected the appeal filed by the Siyam family, Palestinian residents of the city’s Silwan neighborhood, and ruled that the family would be evicted from its apartment and from neighboring shop and yard for the benefit of settlers of  the Elad association.

The expected eviction is no ordinary victory for the powerful settler organization over a simple Palestinian family that has found itself struggling in a protracted and costly two-decade legal battle over its home. This is a moral and symbolic victory over one of the main leaders of Silwan, Jawad Siyam, a social worker who established community centers for children and families in Silwan–someone considered a pillar of the community and a defender of the defenseless in the face of the pressure from settlers and the authorities.

The court ruled that the Elad settlers, who managed to take over 3/4 of the property, would receive one apartment, where a divorced woman with her four children now live, as well as a small shop and yard. Jawad Siam and his family will continue to live in the second part of the property, with a dividing wall with the settlers.

Elad has tried to take over the property of the Siyam family since the early 1990s in various purchase attempts rejected by the courts. In the end, after six long, exhausting and costly legal proceedings, the association managed to convince the court that it owned parts of the house and that the property could be divided so that it would have a foothold in it.

For previous attempts by Elad to purchase the Siyam House – see here.

Peace Now: The settlement in Silwan not only harms the prospects for a conflict-ending agreement and stability in Jerusalem, it is also cruel and evil. The Elad settlers are using their power and money to exhaust and impoverish the Palestinian families in legal proceedings so that they will have to agree to sell them homes. Through their draconian method, they also contribute to the weakening of the communal strength of the Palestinian neighborhoods and encourage the social disintegration of East Jerusalem. 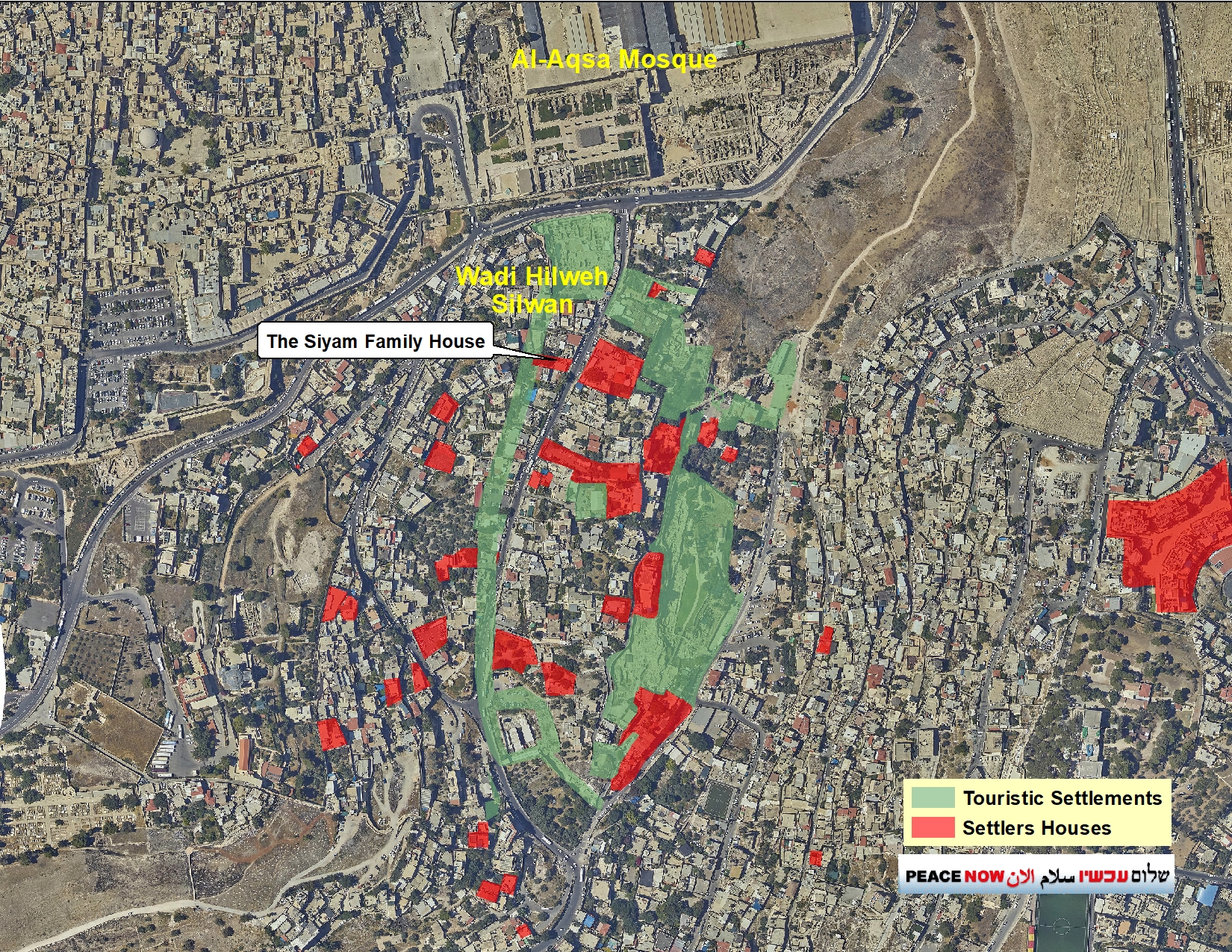 At first, Elad claimed that it had managed to buy the entire apartment of the deceased’s grandmother, Miryam Siyam. According to Elad, the grandmother, who had eight children (three sons and five daughters), gave all her rights to the three sons before her death, and the association acquired these rights from them.
The court rejected the claim and held that the document presented by the settlers in this matter was invalid (not to say false).

After losing the first case, Elad presented another document, this time claiming that the five daughters gave up their rights to the three sons, so that Elad has full rights to the property, which it acquired from the three sons. The court also rejected this argument and ruled that the grandmother’s property belongs to all eight of her children – her heirs equally, and all the settlers managed to acquire from the three sons is three parts out of eight.

But that was not the end of it. At this stage, the Custodian of Absentee Property entered the picture. It turned out that two of the daughters live abroad (in Jordan and Saudi Arabia) and therefore, according to the Absentee Property Law of 1950, they are considered “absentees” and their assets are transferred to the Custodian of Absentees’ Property.

It is important to note that in the grandmother’s apartment now lives her granddaughter, Ilham Siyam, who is the daughter of one of the absentees. She is divorced and lives in an apartment with her four children.

Following the judgment of the District Court, Elad filed the current claim, demanding that the actual property be divided and given half of the property, while the Custodian of Absentee Property announced during the hearings that it had no interest in the property and was willing to sell it to the highest bidder. A tender was then issued to acquire the Custodian’s share, and, not surprisingly, Elad won when it offered to pay more than NIS 2 million. Thus, Elad came into possession of 6/8 ownership of the property, leaving the Palestinian family with only 2/8.

In the ruling, the judge determined that the property could be divided and that the settlers would be given an apartment and a shop, while the remaining 2/8 would stay as part of the adjacent family house.

Thus, Ilham Siyam, who lives in her grandmother’s apartment, who was supposed to be one of the heirs of the property (at least 1/8 of it) will be thrown out of the house only because her mother is considered an absentee and the Custodian sold her share to the settlers.

It should also be noted that one of the sons of the second female absentee lives in Jerusalem. He applied to the Custodian of Absentees’ Property to release and receive his share of the property, but the Custodian refused and preferred to sell it, by tender, to the settlers.

In recent years, we have witnessed a phenomenon in which the Elad settlers join the Custodian of Absentees’ Property in various proceedings against Palestinians in Silwan, in cases where it is possible to weaken the Palestinians’ connection to the property, and to introduce another actor that can take the property or parts of it.