The Peace Now movement and Emek Shaveh organization filed an appeal through Advocate Kais Nasser to the District Planning and Building Appeals Committee against the decision of the Jerusalem Local Council to approve the construction of a pedestrian bridge over the Hinnom Valley (Wadi Rababa).  The bridge is designed to begin at an area under the control of the Elad settler association on the slopes of the Palestinian Abu Tor neighborhood, and to extend northwest toward a public road on the southern slopes of Mount Zion.

Peace Now and Emek Shaveh: “The municipality approved the project in the dark of the night, in a process of building permit without publicity and without public debate. The Ben Hinnom Valley preserves many heritage sites that are an integral part of the history of Jerusalem, and the bridge has far-reaching implications for the public domain in one of the most sensitive areas in Jerusalem. Instead of taking care to preserve and assimilate the history of Jerusalem, the authorities are working together with Elad to create Disneyland-like attractions around the Old City. Considering the needs of the residents in general is not on the agenda of these bodies.” 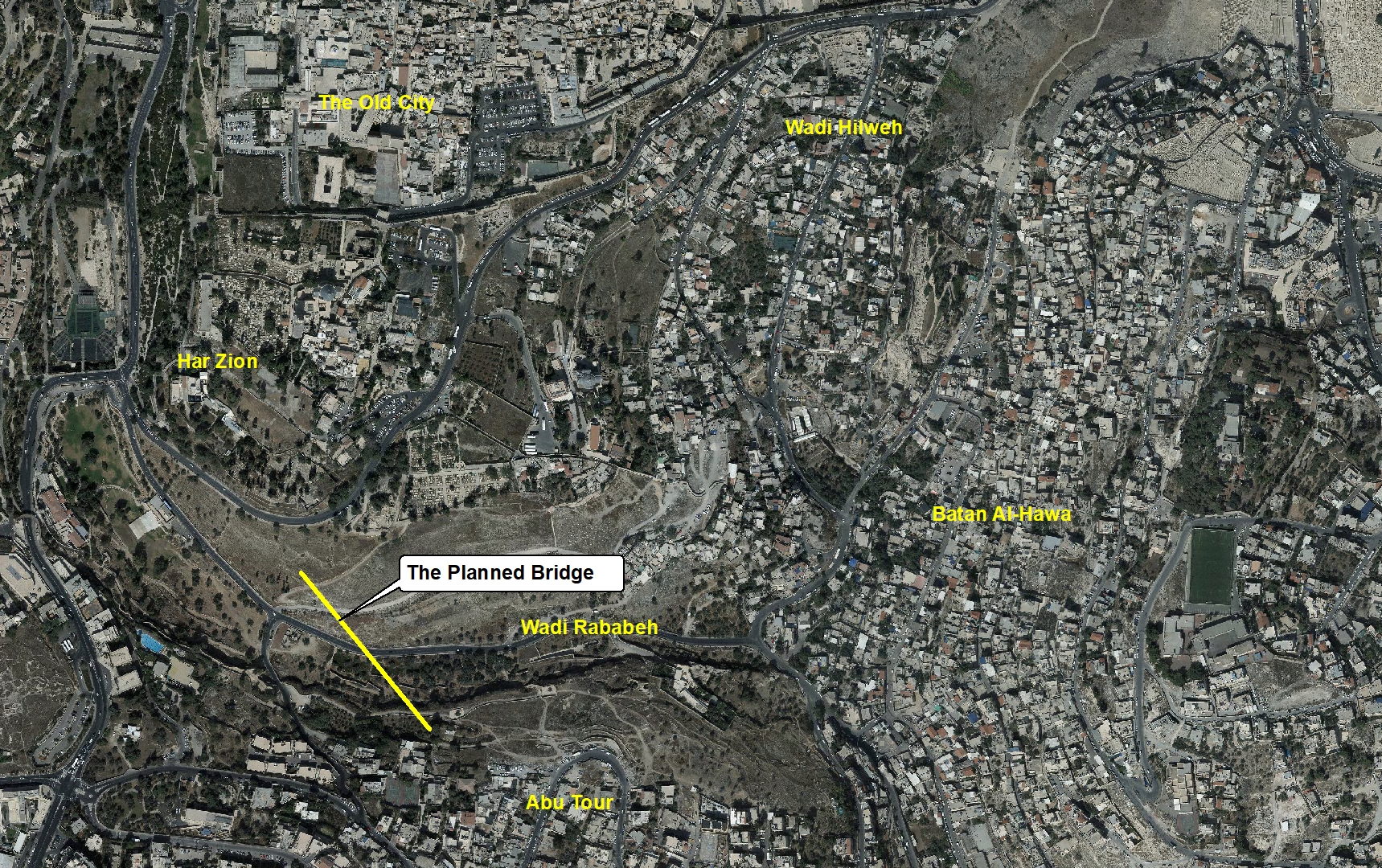 Building Permit for the Bridge

In March 2016, the Jerusalem Development Authority submitted a request for a building permit (No. 219/2017) for the construction of a 180-meter-long bridge with a height of 35 meters above the Ben Hinnom Valley. The bridge is meant to connect a plot currently under the control of the Elad settler group in the southern bank of the valley with the southern slopes of Mount Zion. The local committee of the Jerusalem Municipality chose to promote the bridge by means of a request for a permit, which does not require publicity and public discussion, even though this is a significant monument, in the heart of the Old City’s visibility area.

According to the appellants, the plans in effect in the area of the Old City basin do not allow the local committee to issue building permits for buildings of the proposed bridge type, but rather only limited construction of sports and recreation facilities. Insofar as new buildings are to be constructed, this must be done in a detailed plan that will be brought for approval by the District Planning and Building Committee and placed for public scrutiny.

Among other things, the appellants write:

“The proposed bridge is located in one of the most sensitive and significant areas in Jerusalem and one of the most important in the world. The Old City basin is one of Jerusalem’s most precious cultural, religious and historical assets, as well as politically significant. Construction and development in this area should be done in a careful and considerate way, in a meaningful public debate and in the context of a true planning vision.

It is not without reason that the designs were set in the planned area. . . [an area] whose main purpose is to preserve and protect the Old City basin from rapid development and construction initiatives that might damage the important values in this special area. These plans do not allow the issuance of permits for such a significant construction and do not allow expropriation at all without proper documentation, and they explicitly state the need for detailed planning with the approval of the District Committee.

It is important to note that in addition to the familiar tension between development and tourism needs and the principles of conservation and protection of historical and environmental values, the Old City basin is also an urban area with a population of tens of thousands of people who live alongside and sometimes within historic sites. The bridge and pedestrian traffic will have significant implications for the area and its character for the residents living in the area.

For all these reasons, extreme caution is required in approving development plans in the Old City basin. The permit in question was approved in violation of all the proper planning and public principles, and therefore there is a need to cancel it.”

To read the text of the appeal (Hebrew), click here.

A few weeks ago, construction began on a plot under the control of the Elad Association in the southern bank of the Ben Hinnom Valley, which revealed that the Jerusalem Municipality approved on 3 May 2017 a pedestrian bridge to connect the area controlled by Elad to the slopes of Mount Zion. As of now, all the conditions required by the permit have not yet been fulfilled, and the permit has not yet been issued.

In response to complaints filed by Peace Now and Meretz city councilwoman Dr. Laura Wharton, the municipality claimed that the development work being carried out in the area is not part of the construction of the bridge and that no permit is required because it is only for “restoration of terraces.” However, in the framework of the work, new walls were built, concrete was poured, and excavation and construction work was carried out, which according to the complainants requires a permit. A new complaint that was sent to the city on this matter two weeks ago has not yet been answered.

In recent years, Elad has been working with the Jerusalem Development Authority and the Nature and Parks Authority to develop ideological tourism and micro-settlements in the area of the Old City Holy Basin in general, and Silwan in particular. In the Ben Hinnom Valley area, pedestrian paths have been renovated and re-paved, and the Sambuski Cemetery has been reconstructed by dispersing cement-cast tombstones in the area to give it the appearance of a cemetery.

In addition, Elad appealed to the Municipality’s Business Licensing Department to open a restaurant in the area under its control, but following the objections of its neighbors, it was instead authorized to set up a cafe.

It should be noted that a few years ago, the landowners of the area controlled by Elad submitted a suit to the Magistrate’s Court in Jerusalem, demanding that the association be removed from the area for allegedly having violated the law. Elad claims that it had purchased the land, but the landowners claim that they had not sold any to the association, and that Elad did not buy the land from the legal owners.