Peace Now: The settlement in Hebron is the ugliest face of Israeli control of the territories. There is no place in the West Bank where apartheid is more evident. The construction of a new settlement in the heart of Hebron is a huge damage to Israel and is in complete contradiction to the government’s guidelines. Now that the court has decided not to intervene, a determined action by the government is required to stop construction immediately, before it becomes a fait accompli.

The construction plan in Hebron involved legal acrobatics and a construction permit that exceeds three times the floors and seven times the area allowed by the approved plan in Hebron. Unfortunately, the court decided not to intervene in the outrageous planning decision. Such decision is only possible in the case of settlers in the occupied territories; inside Israel, any planning committee or court would have never approved such plan. 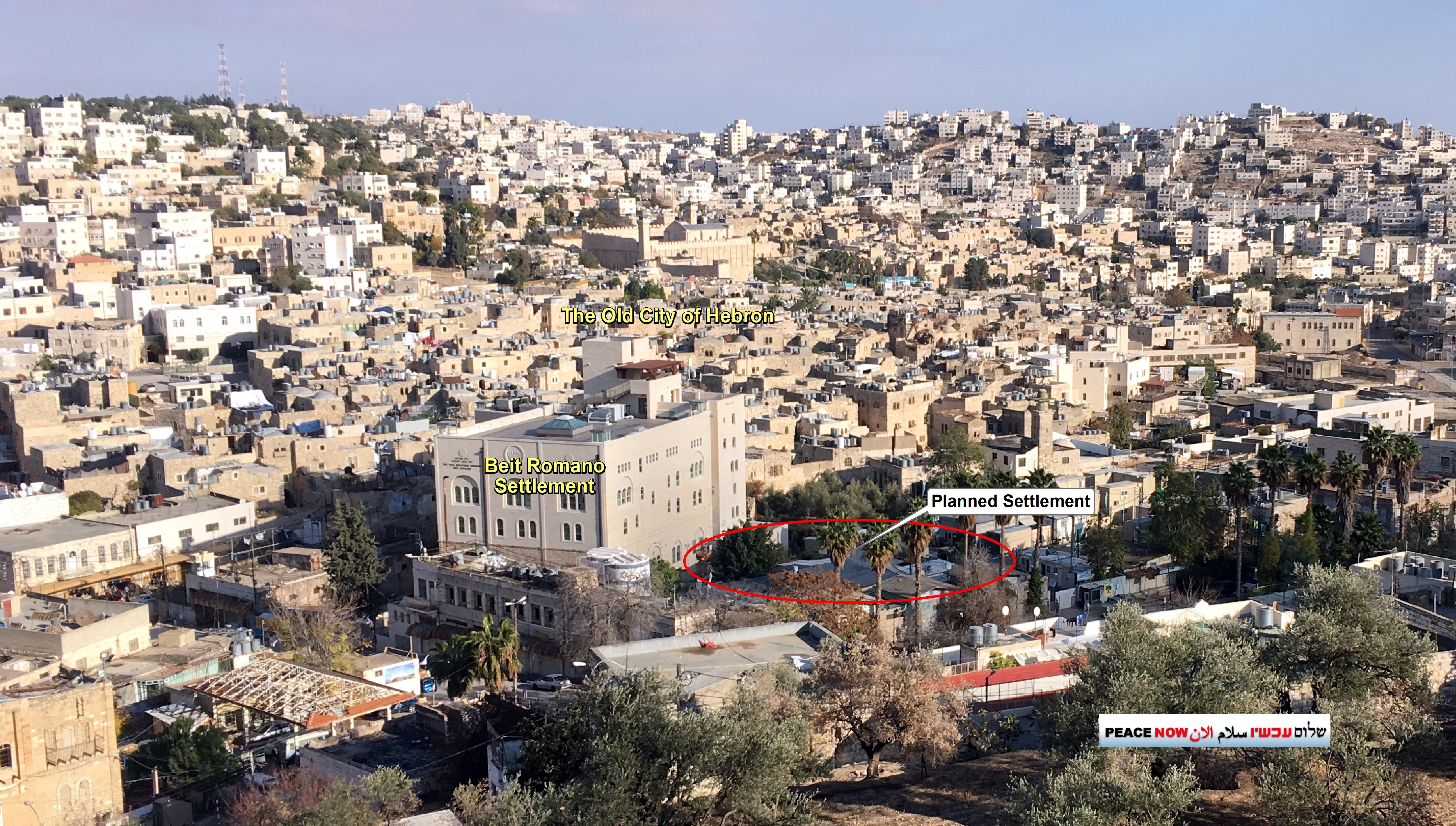 The sequence of events:

1983 – The IDF closed the central bus station of the Palestinian city of Hebron and established a military base there, for reasons of security needs that are supposed to be temporary. The municipality of Hebron, which had the status of a protected tenant in the area, petitioned the High Court against the seizure order and was rejected. Additional petitions on the subject, filed in 1992 and 2008, were also rejected. The military base, called “Mitkanim” (“the Facilities Company”), continued to exist in the area until recently when it was moved a few meters eastward to make way for the new settlement.

2003 – The Ministry of Housing in the Sharon government hires an architect to prepare a plan for a settlement in the old central bus station of Hebron. We do not know whether the Ministry of Housing received at any earlier date allocation for Planning as required, because the land allocations in the West Bank are made without transparency and publicity.

August 2016 – Work begins on moving the military base a few meters east of its site. From plots that were owned by Jews before 1948 and leased to the Hebron municipality for a central station, to plots privately owned by Palestinians. It turns out that the works are being done to clear the area for a settlement. It should be noted that on March 2022, the High Court rejected the petition of the Hebron Municipality and determined that the seizure of private plots in favor of moving the base to make way for a settlement was done for security reasons and therefore it is legal.

October 2017 – The Higher Planning Council of the Civil Administration (HPC) approved a construction-permit for the construction of a new settlement at the land of the bus station in the heart of Hebron. This means that the Minister of Defense (probably Avigdor Lieberman) approved the HPC to hold the discussion. Peace Now and the Hebron Municipality filed appeals with the HPC’s Appeals Committee.

October 2018 – The government has decided to allocate NIS 21.6 million from various government ministries to finance the construction of the project.

November 2019 – The HPC Appeals Committee rejected the appeals and Peace Now and the Hebron Municipality filed petitions with the District Court.

September 2021 – District Court rejected the petitions. Settlers started excavation work ahead of construction, and the Hebron Municipality and Peace Now filed appeals to the Supreme Court.

April 2022 – The Supreme Court rejected the appeals and approved the construction. The last legal barrier to the establishment of the new settlement in Hebron is removed, and now the ball is in political field in the hands of the government to stop construction.

The works can still be stopped!

The establishment of a new settlement in the heart of the city of Hebron for the first time in 40 years cannot be considered as “maintenance of the status quo” and is clearly contradicting the basic guidelines of the current government. The government has full authority to stop the works, even after a building permit is issued, and even after the works on the ground has begun.

This is not simply a theoretical observation: it has been done before and it can be done again. In 1992 (before the Oslo process had begun), the Israeli government, led by Prime Minister Yitzhak Rabin, approved a cabinet resolution to freeze construction in some settlements. This resolution imposed a total freeze of all planning procedures and construction activity in the effected settlements. The resolution provided a compensation mechanism for those who had already invested in the construction. Some investors even filed petitions to the Supreme Court arguing that such an order by the government was illegal – but the Supreme Court turned them down. 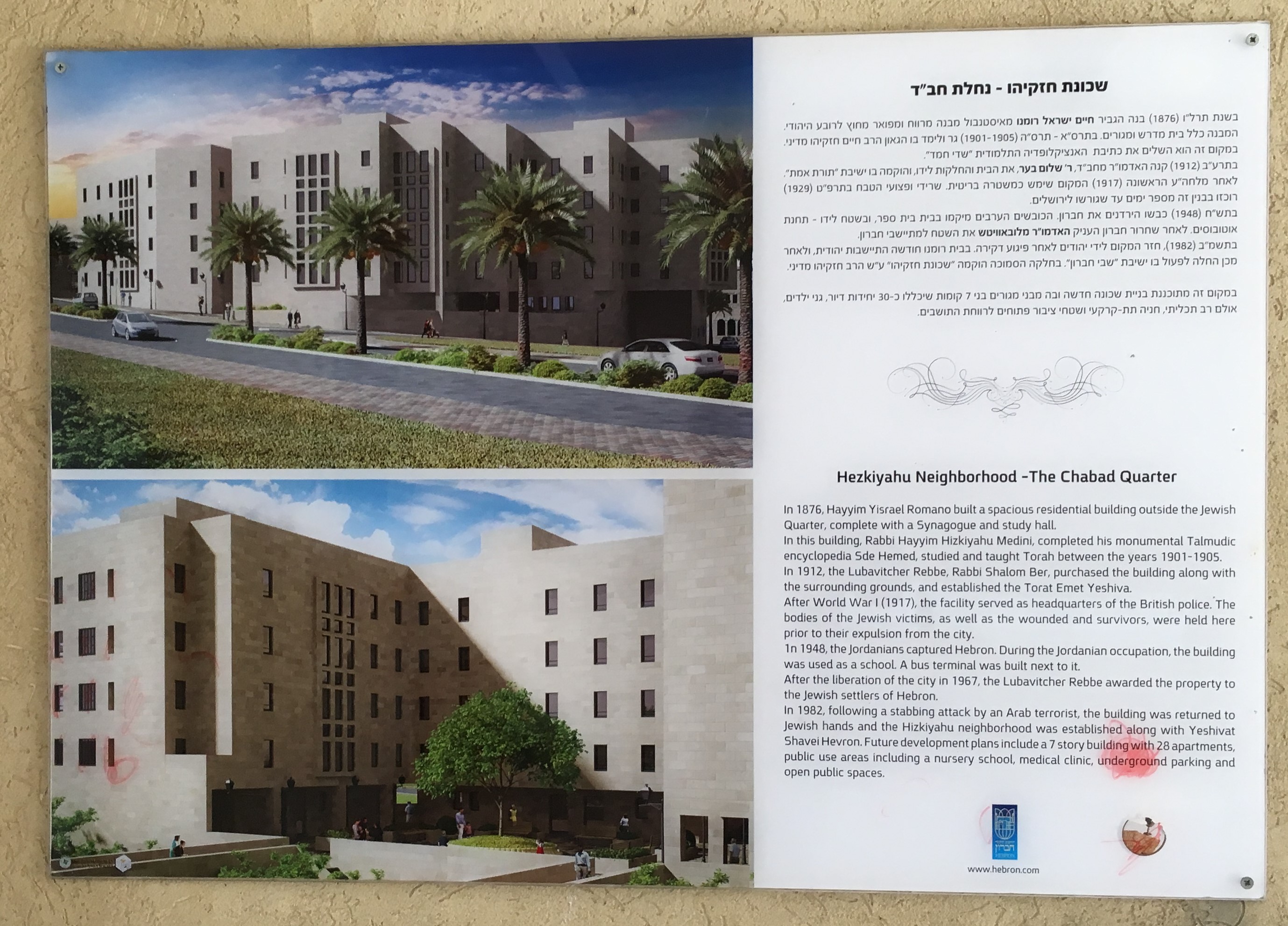 The Model of the Planned 31 Units

The approval of the construction permit for a new settlement in Hebron indicates a significant change in Israeli legal interpretation of what is allowed and forbidden in occupied territory.

Land ownership: The area in question was owned by Jews before 1948, and was leased by the Jordanian government to the Hebron municipality for the establishment of the central bus station. After the occupation in 1967 the Israeli Authorities took over the area and continued to lease the land to the Hebron municipality. In 1983 the land was seized for military purposes, the bus station was closed and a military base was set up there. In 2007, a legal opinion by the Legal Advisor of the Civil Administration determined clearly that because the Municipality of Hebron still has rights to the land and the only reason to seize it from the Municipality was the security need, no settlement is allowed on this land.

However, as mentioned, a few years ago, infrastructure work began to relocate the military base a few meters eastwards to plots owned by Palestinians, in order to make room for a settlement. But this time, after the changes led by the Netanyahu governments in recent years in the legal field, the jurists were found that presented other legal opinions. Peace Now was unable to obtain from the authorities the legal opinion that allowed the allocation of land to the settlers, but following freedom of information proceedings with the help of the Freedom of Information Movement, was able to obtain a similar opinion, concerning a construction plan in the old wholesale market in Hebron. The plan in the wholesale market is in the preparation stages and has not yet been approved.

The Hebron municipality and the Palestinian landowners filed a petition against moving the base to their land, but about on March 2022, the High Court rejected the petition by a majority. One of the judges thought the seizure of the land was illegal, the others accepted the state’s excuse that it was a security need. The matter of the land ownership was raised by the Municipality of Hebron also in the appeal against the construction permit, but the court determined that the planning process is not the place to discuss ownership questions.

According to the planning laws, it is clear that the proposed project violates the provisions of the existing plan and in a normal situation, a new detailed plan would have had to be prepared to approve such anomalies. However in the city of Hebron, the planning authority of the Israeli occupation is limited. It is not clear if such a plan could be justified legally, nor politically. So instead of planning properly, the authorities opted to bend the planning standards.

Peace Now’s petition focused mainly on the planning arguments. Eventually the court decided not to intervene in the decision of the planning authorities who relied on a clause in the plan approving some flexibility in the implementation of it.

As stated, at this point virtually all the legal proceedings have been completed and legally the construction can continue in full force. However, the decision whether to establish a settlement in Hebron or not is in the hands of the government. It can, even now, after the approval of the court and even after the work has begun on the ground, order the cessation of work and prevent the expansion of the settlement in Hebron.