Almost every other week do we hear about another approval of plans, and not always can we understand the real political (and practical) meaning of those approvals.

Here we make some sense and order of the planning process:

A Tender is one of the last procedures before a construction can get started. The tender, which comes only after the approval and validation of a plan, is actually the governmental publication of a call for proposals to buy the rights to build the project. After the bidding process is completed and the contractor is elected, then he or she would apply for a construction permit from the municipality and after getting the permit, they can start the works. A tender will only take place in large scale governmentally initiated projects. In cases of private initiators – they can go straight from the validation of the plan to apply for a construction permit and start the works.

Plans are harder to track as there are so many stages of promotion of plans, and so many plans all at the same time.

The main planning stages that can cause public attention are:

In West Bank settlements, almost every stage of the approval by the Civil Administration Planning Council must be approved by the Minister of Defense. There is no need for any Ministerial approval for plans in Israel or in East Jerusalem.

1) Approval at the local municipality committee – this stage is significant only in Israel and East Jerusalem. After this approval the plan is sent to the Regional Committee for Planning and Construction of the Ministry of Interior in Israel and in East Jerusalem or, in West Bank settlements, to the Settlement Subcommittee of the Higher Council for Planning in the Civil Administration.

3) Depositing – Publication an ad in three newspapers (two in Hebrew and one in Arabic) announcing that the plan is subject to public objections for 60 days. The Minister of Defense must approve the publication of plans that are deposited for West Bank settlements.

4) Discussion of the Objections – the Regional Committee (in Israel and in East Jerusalem) or the Settlement Subcommittee of the Higher Council for Planning in the Civil Administeration (in West Bank settlements) hears the objections and recommends whether to make changes in the plan or to reject it or not. Here too, the Minister of Defense must approve the Higher Council to convene.

5) Approval for validation – after all the changes are made, the Regional Committee (in Israel and in East Jerusalem) or the Settlement Subcommittee of the Higher Council for Planning in the Civil Administration (in West Bank settlements) again discusses the plan to allow its validation. The Minister of Defense approve the Higher Council to convene.

Practically, in many cases the Minister of Defense grants the approval for all of the stages at once, so there is no need to seek the Minister’s signature many times. 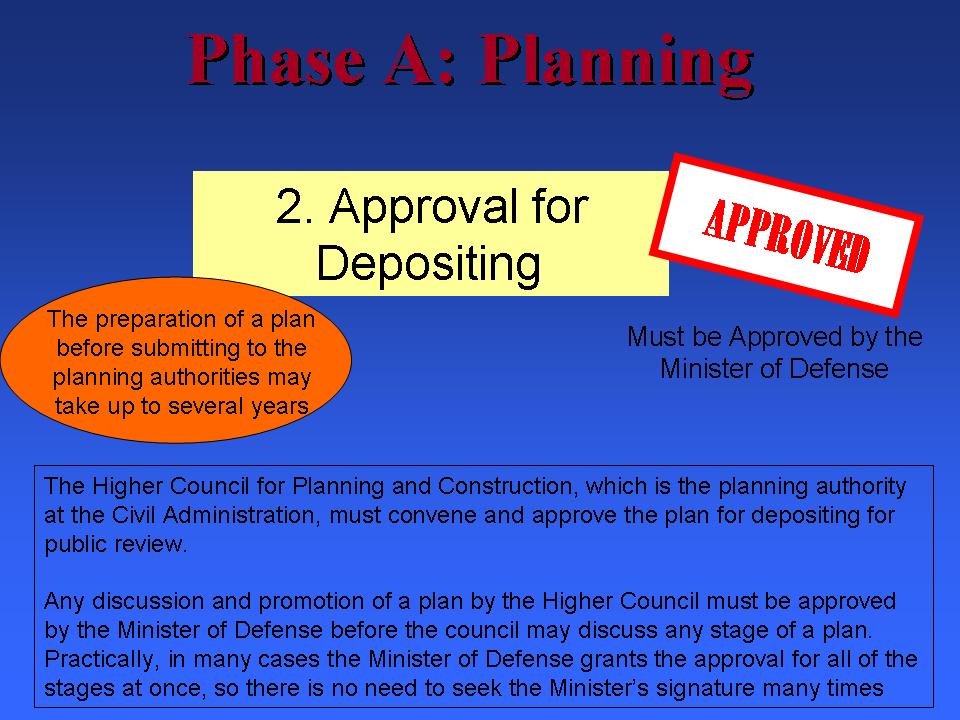