No compromise in the eviction cases in Sheikh Jarrah

Yesterday, the families in Sheikh Jarrah announced that they were rejecting the compromise proposed by the Supreme Court in the eviction lawsuit filed against them by settlers. In parallel, the settlers also submitted their response to the proposal, but they did not publish its content and it is not known whether they agreed or not. In any case, because one (or both) parties rejected the compromise offer, the court will have to rule on the issue and determine whether to evict the families from their homes in favor of the settlers or accept the appeal and prevent eviction. Writing the verdict can take weeks or months.

The court presented the families with a difficult dilemma: on the one hand, their claim is that they have rights in their homes in which they have lived for nearly 70 years, and that they received them from the Jordanian government and UNRWA in exchange for relinquishing their status as refugees. On the other hand, both the Magistrate Court and the District Court (as well as previous proceedings from the 1980s) ruled that the settlers are the legal owner of the lands and that the families should be evicted, based on pre-1948 ownership and the discriminatory law that allows Jews to return to properties in East Jerusalem. In the Supreme Court hearings, the spirit of the judges was that they were bound by previous court rulings from previous years and that the “dry law” was in favor of the settlers. The court’s compromise proposal sought to guarantee the families at least 15 years of quiet, during which they would be protected tenants in the property, and pay the settlers small rent. This is of course not a permanent solution, and 15 years later the settlers will be able to evacuate them. Eventually, as mentioned, the families decided not to agree, and now the court must write a ruling.

It is important to emphasize: even if the Supreme Court rules that the families should be evicted from their homes, the government of Israel can still prevent the eviction. First, it can delay the evacuation for a long time for political and security reasons (by avoiding allocating police forces to carry out the eviction), but beyond that, the government can, and should, resolve the issue once and for all: expropriate the land from the settlers and allocate it to the Palestinian families. In such a case, the settlers will receive compensation from the state. This is the just and right move to prevent the blatant injustice.

A few days ago, the Supreme Court rejected an appeal by Palestinian residents of Sheikh Jarrah, who owns a bus parking lot and a car wash business in the neighborhood, and ruled that they should vacate the lot. This ruling caused confusion in the reports and some people mistakenly thought that there was a connection between the ruling and the eviction claims against the families. It is important to clarify that this is not the case. The ruling to vacate the bus parking lot and the car wash comes after a procedure of expropriation for public needs carried out by the Jerusalem Municipality. The land did not belong to Jews, neither before 1948 nor after, but was owned by Palestinians. The stated reason for the expropriation was the desire to turn the lot into a green area and roads, in accordance with an outline plan approved in 1999. 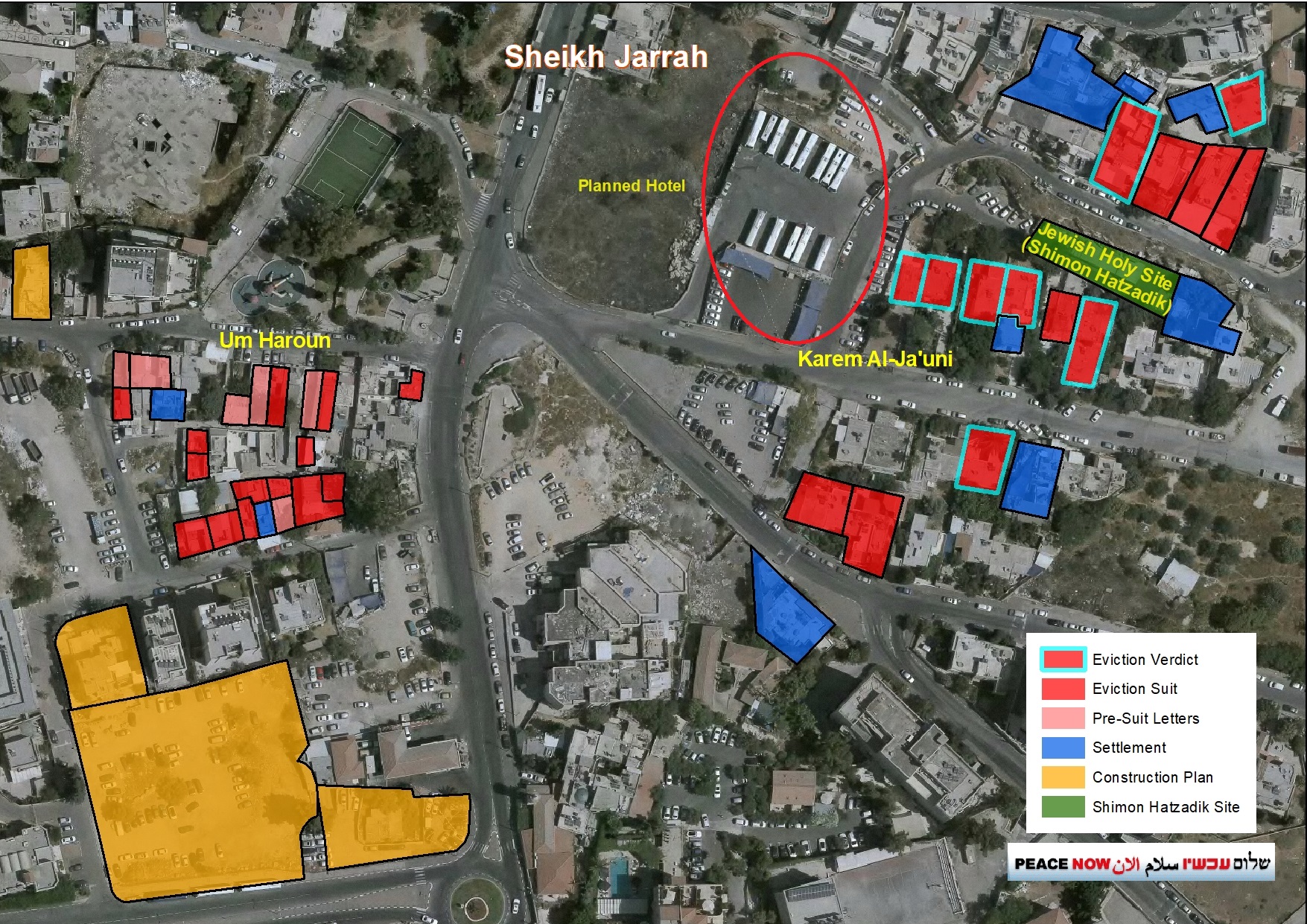 The Parking for busses in Sheikh Jarrah

The plan for the hotel:

In 1999, a construction plan was approved for the construction of a hotel in Sheikh Jarrah on the lot adjacent to the busses parking lot (Plan No. 5225). The hotel’s initiator and landowner is a company called MEHI – Middle East Hotels International, which is owned by a foreign company registered in Tortola. The two registered directors of the company are Arabs from London and Israel. The plan initiated by the hotel owners included also the adjacent plot that they do not own and on which the bus parking lot operates, and designates it for expropriation into an open public area with paved roads, lawns and gardening.

According to the plan, the Jerusalem Municipality issued an expropriation order in 2017, and the owners of the bus parking lot filed an objection. On 25/6/21 the district court rejected the objection to the expropriation, and on 28/10/21 the appeal filed in the Supreme Court was also rejected. The Jerusalem Municipality has begun eviction proceedings against the parking lot, and the eviction date set by the Execution Office is currently between December 1 and December 15, 2021. It is important to note that the parking lot owners are entitled by law to compensation for expropriation, the cost of which is passed on to the hotel initiators.

The decision to expropriate raises several questions. First, the timing. As far as we know to date, no application has been opened for a construction permit for the construction of the hotel. That means there do not appear to be any procedures for starting construction of the hotel soon. The designation for open public space is directly related to the hotel, so it is not clear why it was urgent for the municipality to act right now. We will also mention that the State Comptroller recently remarked to the Ministry of Transportation about the severe shortage of hundreds of parking spaces for buses in Jerusalem, and now the Municipality is cancelling parkings of dozens of buses. Another issue to wonder about is the proximity of the area to the area of ​​the tomb of Shimon the Righteous (Shimon Ha’tzadik), which is a pilgrimage site for Jews, especially ultra-Orthodox, throughout the year. It is possible that the municipality’s desire to carry out the expropriation is related to the desire to act for the benefit of Jewish visitors to the neighborhood and to allow the Israeli grip of the neighborhood to expand, even if it is formally an open public space intended for the entire Israeli and Palestinian public.