Approx. 500 words was all what the judges of the Jerusalem District Court needed to determine the fate of 7 families with 31 people, 8 of them are children in Sheikh Jarrah. Yesterday the court ruled that the families should vacate their homes by August 1st, 2021. Three weeks ago, the same court rejected another appeal, of 6 other families from four homes and in a few rows, determined that they should leave their houses in favor of settlers. This way, in less then one month, the Jerusalem District Court ordered the eviction of 58 people, 17 of them children, from 7 houses in Sheikh Jarrah, despite the fact that all of them legally settled in their homes, in an official agreement with the Jordanian government which built the houses for them at the 50’s.

The lawsuit is part of an organized move designed to dispossess a Palestinian community of its home and establish a settlement in Sheikh Jarrah in its place. Hundreds of Palestinians in Sheikh Jarrah are in a similar situation in court proceedings, and hundreds more in Batan Al-Hawa in Silwan. Adv. Sami Arsheid who represents the families, confirmed after the hearing of the appeal on Monday, that the issue of the evictions in Sheikh Jarrah and Silwan is on of the items of the complaint filed by the Palestinians to the International Court of Justice in The Hague (the ICC). Yesterday, the prosecutor of the ICC, Fatou Bensouda, declared the initiation of an investigation respecting the situation in Palestine.

Since the beginning of 2020 to the present day, judgments have been given in 14 eviction claims of settlers against families in the Batan Al-Hawa in Silwan and Sheikh Jarrah. In the rulings, the Magistrate’s Court ordered the evacuation of 36 families with 165 people, including dozens of children. 7 cases in the Batan Al-Hawa for the evacuation of 107 people from 20 families; 7 cases in Sheikh Jarrah for the evacuation of 58 people from 13 families. All the families have filed appeals and are in various stages of hearing in the district court, and some even in the Supreme Court. Dozens more families are in proceedings and may receive evictions soon. If the government does not stop the move, we might see massive evictions of families in the coming months.

Peace Now: “The story here is not legal but political. The court is only the tool by which settlers use with the close assistance of state authorities to commit the crime of displacing an entire community and replacing it with settlement. The Israeli government and settlers have no problem to displace thousands of Palestinians in the name of “the Right of Return” to properties before 1948, while they strongly claim that the millions of Israelis living in Palestinian properties before 1948 cannot be evicted. Since the evacuation of the Mughrabi neighborhood for the purpose of expanding the Western Wall plaza in 1967, there has been no such deportation in Jerusalem. On the table of the prosecution in the International Court of Justice in The Hague is a complaint about the displacement process led by the government in Sheikh Jarrah and in Batan Al-Hawa. The government can still stop this injustice”.

The eviction lawsuits against the families of Dajani (11 individuals), Dahudi (2 individuals) and Hammad (18 individuals) were filed by a company called “Nahalat Shimon”, owned by a foreign company registered in Delaware (USA), which represents settlers seeking to build a large settlement in Sheikh Jarrah. The settlers purchased the land from two Jewish associations, the Sephardi Community Committee and the Knesset Israel Committee, which claimed to have purchased the land at the end of the 19th century.

In 1948 the land, which was then without structures, came under Jordanian rule. The Jordanians designated the land for the resettlement of dozens of Palestinian refugee families, who exchanged their refugee status for homes in the newly-built neighborhood in Sheikh Jarrah. After 1967, the Jewish organizations recovered the ownership rights of the land based on the Legal and Administrative Matters Law (see below) and began to demand that the refugee families vacate their homes. To that extent, the associations were exercising the “right of return” of Jews to assets taken in 1948 (a right not afforded to Palestinians).

Dozens of Palestinian families are in danger of being evicted

In recent years, the Nahalat Shimon settler company has filed numerous lawsuits against dozens of families in Sheikh Jarrah in the Karem Ja’uni area, which are in various stages of court hearings. Recently, eviction procedures against the Sabbagh family were renewed after losing in court to the settlers in a similar lawsuit.

The settlement of Karem Ja’uni began in 2008 when the Al Kurd family was evicted from its home, and in 2009 the Rawi, Hanoun and part of (another) al-Kurd families. Beforehand, in the late 1990’s, settlers entered a few houses near Karem Ja’uni that were owned by Jews before 1948. Apart from the Sabagh, Dajani, Dahudi and Hammad families, there are at least seven additional eviction cases dealing with dozens of families in various stages of court hearings in Karem Ja’uni. On the western side of the Sheikh Jarrah Neighborhood, in Um Haroun, there are another few dozens of families facing eviction lawsuits by settlers, and in Batan Al-Hawa in Silwan there are almost 100 families at risk of eviction.

Background: The threat of eviction in Sheikh Jarrah and Silwan

The houses in Karem Ja’uni were built in the 1950s by the Jordanian Housing Ministry as part of a refugee rehabilitation project in which 30 houses were constructed in Sheikh Jarrah for refugee families in return for waiving their status as refugees. It should be noted that the process of registering the houses in the names of the refugees was not completed before 1967. After the area was transferred to Israeli control in the 1967 War, the Jewish associations could take advantage of the lack of registration, and registered the land in their name based on the Legal and Administrative Matters Law (1970).

From the agreement between UNRWA, the Jordanian Government and the residents.

Thus, without saying so explicitly, Israeli law provides for a different law for Jews and Palestinians. In certain cases, like in Karem Ja’uni, the implementation of the law leads to the evacuation of Palestinian refugees from their homes, and in effect makes them refugees for the second time. Moreover, the government of Israel made sure to compensate all the Jews who lost their property in 1948 and gave them alternative assets inside Israel. Hence the owners of the properties are entitled under the Legal and Administrative Matters Law to double compensation for the loss in 1948.

For an analysis of the law and its implementation, see here

The Palestinian refugees families in Sheikh Jarrah, had owned houses and lands in Israel before 1948, but as a result of the war became refugees. According to the Absentee Property Law (1950), they are not entitled to receive or return to their property. In the 1950s, those families attempted to rehabilitate themselves in exchange for giving up their status as a refugee family. Today, on the basis of the discriminatory law enacted by the Knesset, those families are about to become refugees again, without any justice, where all that has changed is the geopolitical situation and the law enacted by Israel. 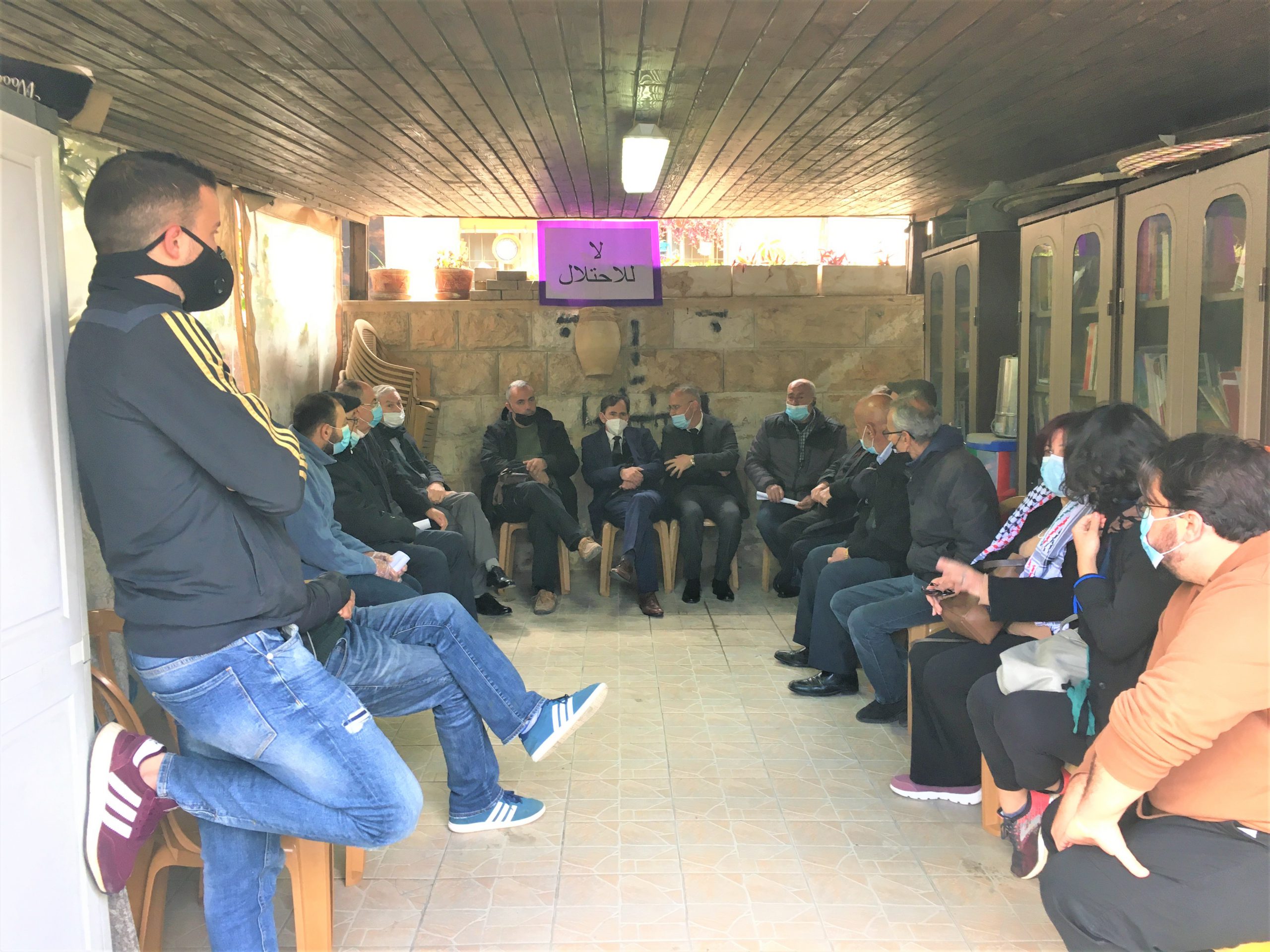 Palestinian Residents of Sheikh Jarrah, 2 March 2021. All of them got eviction verdicts from court

Protest at the District Court against the displacements in Sheikh Jarrah, 2/3/2021