The plan to establish a new settlement west of Ariel (“Ariel West”) has recently undergone another stage on the road to realization. On the 18.8.2022, the Civil Administration will discuss Plan No. 130/3/5 to amend the route of the access road to the new settlement, after it became clear that the access road planned in the original plan passes through private land.

From the date of publication of the plan deposit, the public is given 60 days to file objections to the plan, but the counting of days begins only when the publication is made in a newspaper ad. As far as we were able to find out, as of 27/1/22 no ad has been published in the newspaper (usually, the ad in the newspaper is published close to the internet publication, and if the promotion of the plan is not canceled by the MOD, it is likely that the ad will be published in the next few days). After the objections are filed and heard, the Higher Planning Council (HPC) of the Civil Administration may convene to approve the plan for validation. Approval of the plan for the access road is a condition for the establishment of the settlement. See here details on the planning process.

Peace Now: The government has been given another opportunity here to stop the establishment of the new settlement. After the Ministry of Housing rushed to issue tenders for the sale of the building rights, construction can still be halted if the defense minister stops the planning process. The “Ariel West” plan is not just a plan for thousands of housing units, but it is a new settlement designed to block the town of Salfit and prevent the development of Palestinian space in the area. Road comprise the infrastructure of the occupation, and the undercurrents of apartheid in the occupied West Bank. This dangerous plan must be stopped. 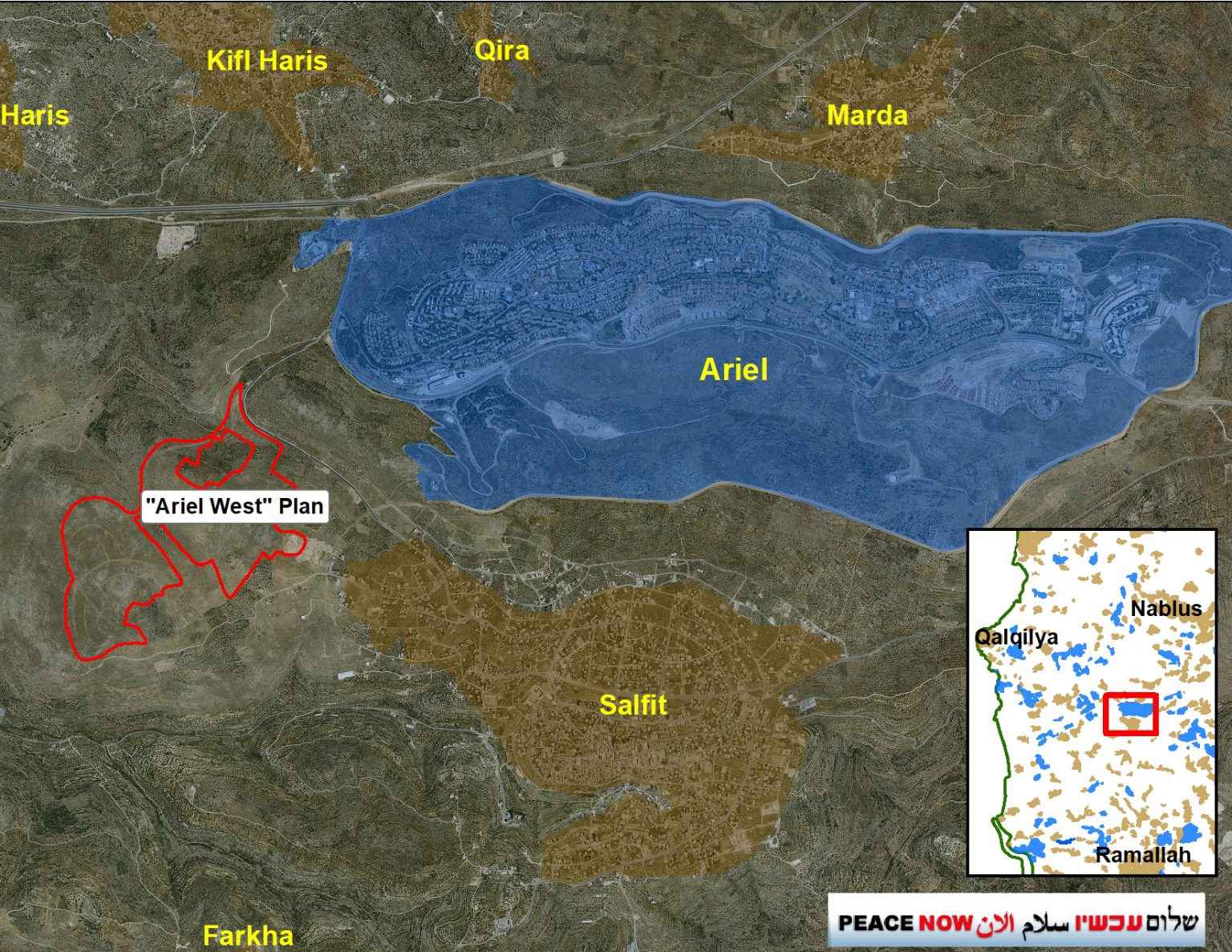 In October 2021, the Ministry of Housing issued tenders for the construction of 731 housing units for the establishment of the settlement “Ariel West”, which is formally considered part of the settlement Ariel but in practice, it is detached and remote from it, and it is in fact a new settlement. It now turns out that the publication of the tender was done even before all the required planning procedures were completed. Although there is no legal impediment to publishing a tender before the planning is completed, this indicates an attempt to hurry up and promote construction.

The significance of the plan for a new access road

The plan for Ariel West is a very old plan that was approved in 1991 and has not yet been built. The plan and access road were planned in accordance with the boundaries of the “state lands” that existed in those days. “State lands” in the territories are mostly lands that Israel has declared public lands base on its draconian interpretation of the Ottoman Land Law (according to which land that has not been cultivated for a certain time becomes “state land”). During the 1980s, wholesale declarations of close to one million dunams were made by inaccurate means. In the late 1990s it was decided that the declarations were so inaccurate that a full review of the entire declaration must be conducted before it can be realized. Following this, the “Blue Line Team” was established in order to re-examine the old declarations. The team discovered deviations of tens and even hundreds of dunams in the old declarations and added and subtracted from the area declared as state lands. For more information on the work of the Blue Line Team, see the Kerem Navot report.

As part of the Blue Line Team’s work towards the realization of Ariel West’s old plan, it turned out that the access road planned in 1991 passed partly through land that turned out to be in fact private land and not “state land”. In order to allow the construction of the plan, the access road had to be redesigned on state lands only, and for this purpose plan 130/3/5 has been prepared and has now been deposited.

During the discussion of the depositing of the plan at the Higher Planning Council, which took place on 25/6/2020, the Ariel municipal engineer said that “until we approve the plan for the access road, we will not be able to build [the apartments].”

The story of this road is a microcosm of the Israeli occupation: Israel harms the Palestinian economy on a daily basis, prevents its development, bans construction (and, in the case of Gaza, shells and destroys infrastructure), and those who pay for it, and in fact, allow it, are the donor countries.

The plan can still be stopped! – Each stage of the planning process in the territories requires the approval of the Minister of Defense. If the Israeli government wants to prevent the construction of the new settlement, all that is required is that the Minister of Defense refrain from approving the continued promotion of the plan or revoke the approval given for the publication of the deposit. In this stage, the Approval for validation – after all the changes are made, the Regional Committee (in Israel and in East Jerusalem) or the Settlement Subcommittee of the Higher Council for Planning in the Civil Administration (in West Bank settlements) again discusses the plan to allow its validation. The Minister of Defense approve the Higher Council to convene. To read more about the planning process, see here.

For more information on the “Ariel West” plan, see here.