[Update from January 5, 2022: The opening dates of the tenders in Ariel West were postponed to February 7th, 2022. The closing date for some of the tenders is March 7 and for others April 4]

Quietly, under the radar, the government has begun the construction phase of a huge new settlement with far-reaching implications for the prospect of peace and the lives of tens of thousands of Palestinians in the West Bank. The bulldozers have not yet started work, but the tender, which, if not canceled, could bring the works to start within a year or two, has been published. On 24 October 2021, the Ministry of Housing issued tenders for 1,355 housing units in the settlements. 731 of the units were in the settlement of Ariel. An examination of the details of the tenders in Ariel reveals that this is the implementation of an old plan, approved in 1991, which was intended to establish a new settlement. Formally, it is part of the settlement of Ariel, but in fact the new settlement is about 2 km away from it and is outside the of ​​the fenced area of Ariel.

Peace Now: It is hard to believe that this tender would have been published if it had been brought for government approval or to any public discussion. The Ministry of Housing took advantage of a plan approved 30 years ago to dramatically change the heart of the West Bank. The “Ariel West” plan is not just a plan for thousands of housing units, but it is a new settlement designed to block the town of Salfit and prevent the development of Palestinian space in the area. This is not only a severe damage to the lives of thousands of Palestinians in the area, but also to the chance of reaching peace and two states in the future. 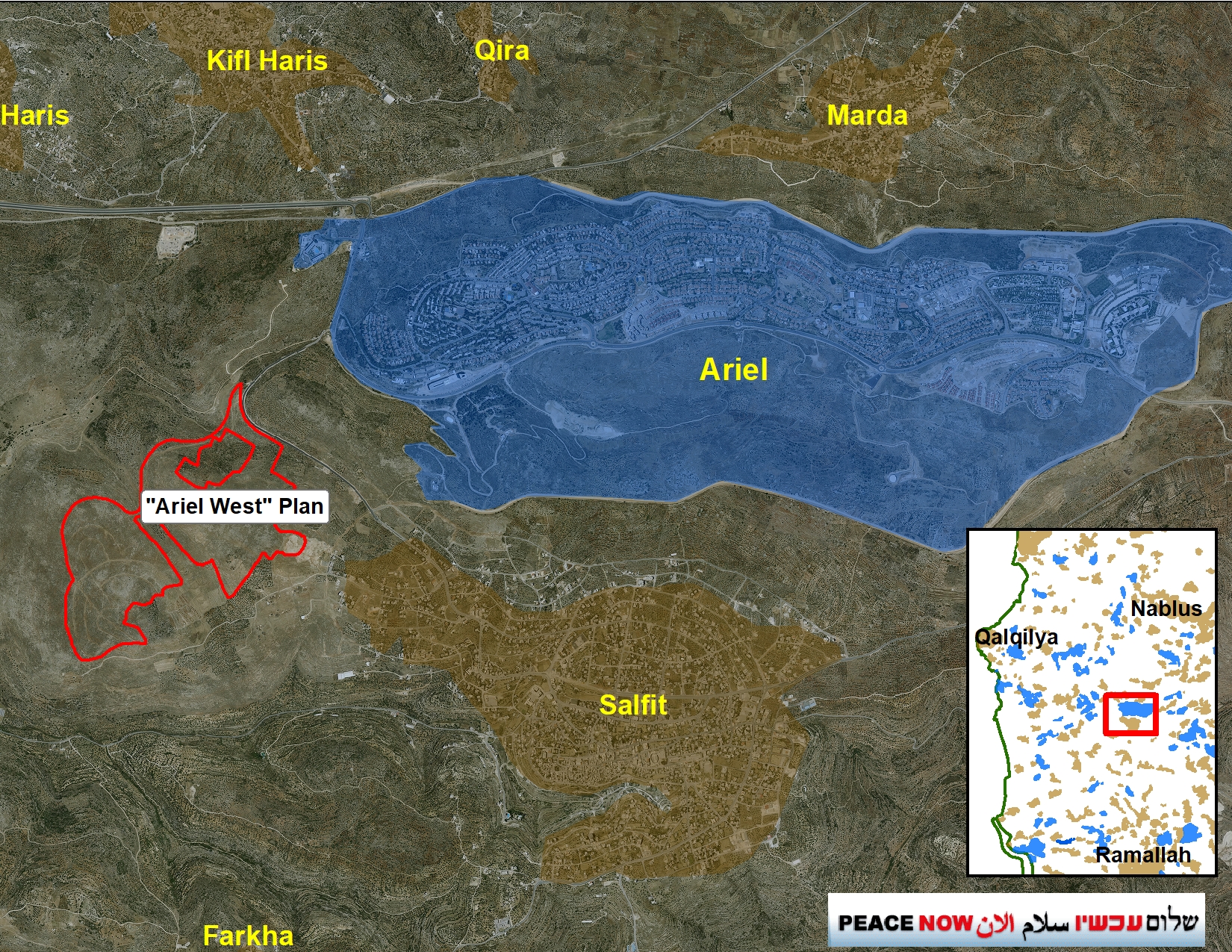 The tenders published in Ariel are in accordance with Plan No. 130/3/1, which was approved in 1991 for the construction of approximately 1,600 housing units on land that was declared “state land” years before. Officially, this is an area included in the jurisdiction of the settlement of Ariel, but it is located about 2 km drive from Ariel and outside its fenced area.

The implementation of the plan and the tenders, will block completely all the development potential of the town of Salfit and its surroundings, which was to develop into a district city for the benefit of the Palestinian communities in the area, and in the future even to connect with them.

Watch the video here that explains Ariel’s implications for Salfit and the environment:

The meaning of publishing the tenders

In some of the settlements, especially the larger ones, it is the Ministry of Housing that initiates and is responsible for carrying out the construction. In order to build, the Ministry of Housing is issuing a tender inviting contractors to submit bids for the purchase of the rights to build the houses. After the tender is published and the bids are received, the contractors are selected and contracts are signed with them for the execution of the works. The contractors then apply to the local authority for a building permit and start work. Usually between one or two years pass from the date of publication of the tender until the start of the work on the ground.

Now is the time to stop construction!

It is important to emphasize that since this is construction in the occupied territories, the government can stop it at any stage, and even after construction has begun in the area (as the Rabin government did in 1992). At the same time, the more advanced the construction, the higher the price (political and economic) of stopping it and the harder it is to prevent it.

In the case of Ariel West, the tenders were published on 24/10/21, but the opening date of the tender for bids will only begin on 16/12/21. The deadline for submitting bids in some of the tenders in Ariel is 16/1/22 and in other tenders it is 22/2/22. As long as no bids have been submitted and the tender has not even been opened for bidding – there is no problem in canceling the tender. In fact it is possible to cancel the tender easily and at almost no cost even after it has closed and even after bids have been submitted. But when winners have already been decided and contracts signed with them, the cancellation of the tender may involve compensation to the contractors and the price for cancellation goes up.

It is important to note that a cancellation of a tender is not a rare thing. There were many times that tenders for construction were published but eventually were cancelled for different reasons.

See also the report in Haaretz 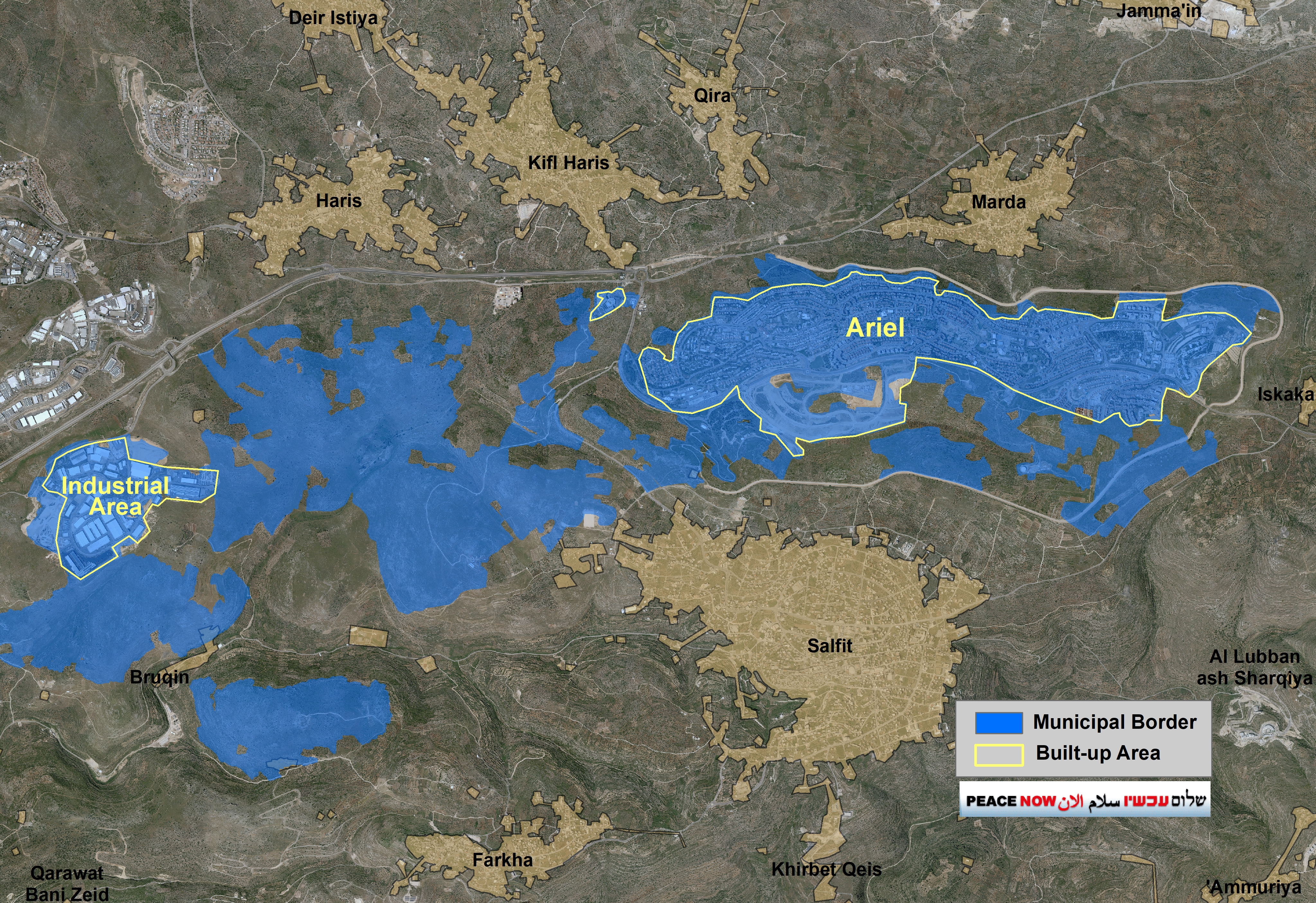 The Municipal Border of Ariel compared to its built-up area

The area of the planned construction of Ariel West