The High Court of Justice will hold a hearing tomorrow (22/5/15) at 9:00 am, in a petition filed by Peace Now together with Palestinian owners of lands near Bethlehem, demanding the demolition of 17 houses built on their private land in the outpost of “Derech Haavot”. According to the State’s respond to court, it appears that the Minister of Defence is pushing the Attorney General (despite his legal opinion) to ask the court to allow a de-facto confiscation of the Palestinian lands in order to avoid the demolition. 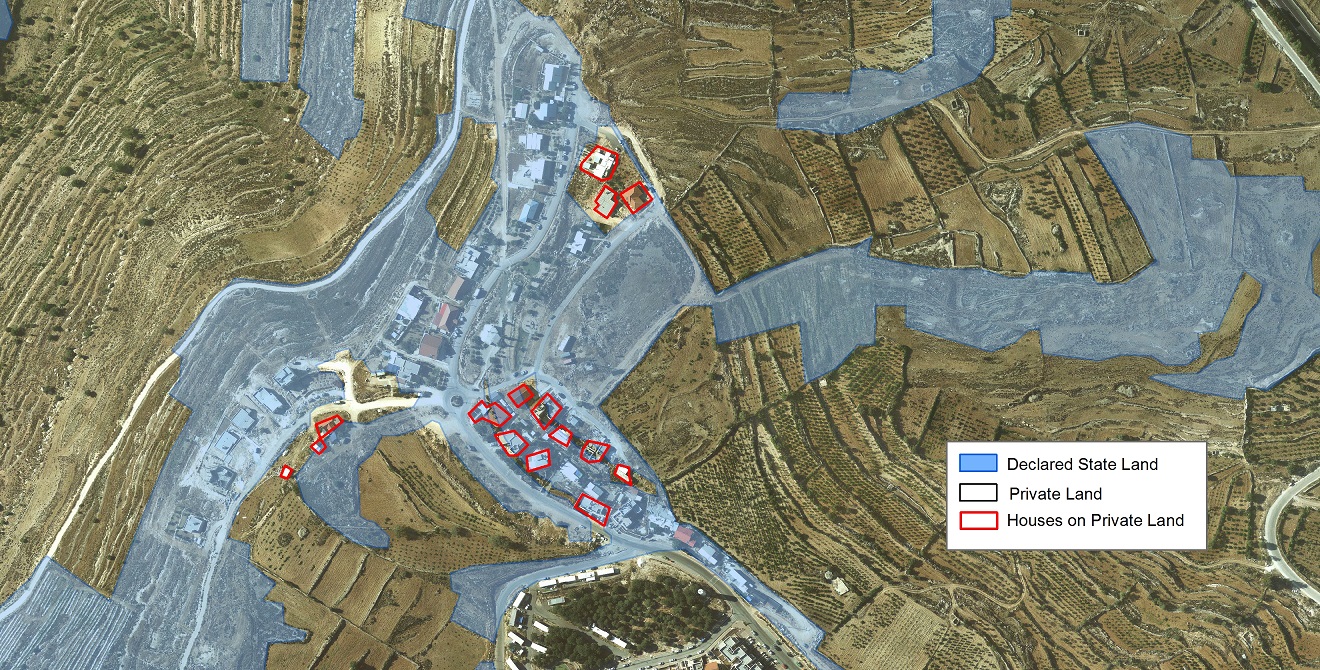 The houses on private lands in Derech Haavot

The legal acrobatics to allow the confiscation

The outpost of Derech Ha’avot was established in 2001, on land that was then considered private land, and is now containing around 60 houses. Last year, following a long legal fight against the outpost, the State declared the lands of the outpost as State Land (based on the Israeli interpretation of the Ottoman Law according to which if land is not cultivated for several years by the owners, it becomes state property). However, some of the land on which the outpost was built could not have been declared as state lands because it was clear that it was cultivated. The declaration left the outpost with 17 houses that are built fully or partially on private Palestinian land.

Two weeks ago the State asked the court to postpone the hearing planned for Monday in several months, in order for the state to review a proposal presented by the Municipality of Gush Etzion. The suggestion of the Gush Etzion municipality was mentioned in its response to court. The idea is to use a “re-parcellation” procedure (AKA “unite and divide”) which unites a few parcels together and enables to swap lands between owners. This way the settlers would receive the Palestinian land and the Palestinian owners will be compensated with adjacent lands. This is actually a de-facto confiscation.

Up until today it was clear to the authorities that a confiscation of land for the benefit of the settlements was illegal. In previous court cases against outposts built on private lands (such as Migron and Amona etc.) right wing Knesset members proposed a new legislation that was meant to allow such confiscation (it was called “the regulation law“), but it was never approved.

Last week the Supreme Court rejected the state’s request to postpone the hearing and demanded to know what was the proposal that they want to look into. In response, the State Attorney wrote that “due to the request of the political level” and despite the fact that they have raised the legal problematics of such proposals in the past, they are asking another 90 days to consider this idea.

If accepted, this re-parcellation idea will allow settlers to build everywhere, regardless of the ownership of the lands, knowing that in any case even private lands could be retroactively legalized. In addition, it will allow the retroactive legalization of the many outposts and settlements that have been built on private Palestinian lands in the past.

Peace Now: “This proposal is a kind of legal acrobatics that is meant to confiscate lands without calling it a confiscation. It seems that the Minister of Defense is putting pressure on the State’s Attorney to change his legal conclusions, in order to satisfy the settlers. It is bad enough that the Government is using draconian ways to take over Palestinian lands that are considered “legal” in the occupation system (the declaration of state lands); However, allowing such land grab would be crossing a red line. Unfortunately, the occupation makes good people justify bad deeds such as the stealing of private lands. This is just another reason why we, as Israelis, mush continue to fight in order to end the occupation.”