*** Update from 22/2/2022: The Magistrate Court temporarily suspended the eviction of the Salem family. The family appealed to the court against the decision of the Execution Office to evict them during the month of March 2022. The court asked the response of the settlers and in parallel agreed to freeze the eviction until another decision is taken. In the coming days or weeks the court will decide whether to hear the appeal or to reject it on spot, and whether the family could stay till a final decision is made in the appeal. ***

The Execution Office Registrar rejected yesterday the Salem family‘s claims against the intention to evict her from her home in Sheikh Jarrah in favor of settlers, and ruled that the eviction would take place anytime between March 1 and April 1, 2022. The family intends to appeal the decision to the Magistrates Court, but the chances to prevent or delay the eviction are not clear.

The right wing activist and member of the Jerusalem City Council, Yonatan Yosef, managed to obtain ownership of the house and demand its eviction, based on discriminatory Israeli law that allows Israeli property owners lost in the 1948 East Jerusalem to get them back (while another law prevents Palestinians from obtaining property they lost in Israel in 1948).

Peace Now: This is a terrible injustice based on the cynical exploitation of a discriminatory law that allows Jews to exercise the “right of return” to property lost to them in 1948 in East Jerusalem, at the expense of Palestinian refugee families whose Israeli law prevents them from receiving property they lost in Israel in 1948. This is exactly what the Mishnah says: “He who says: mine is mine and yours is mine, is called evil.” This is not a legal matter but a political matter. The government can stop this displacement, and it must do so. 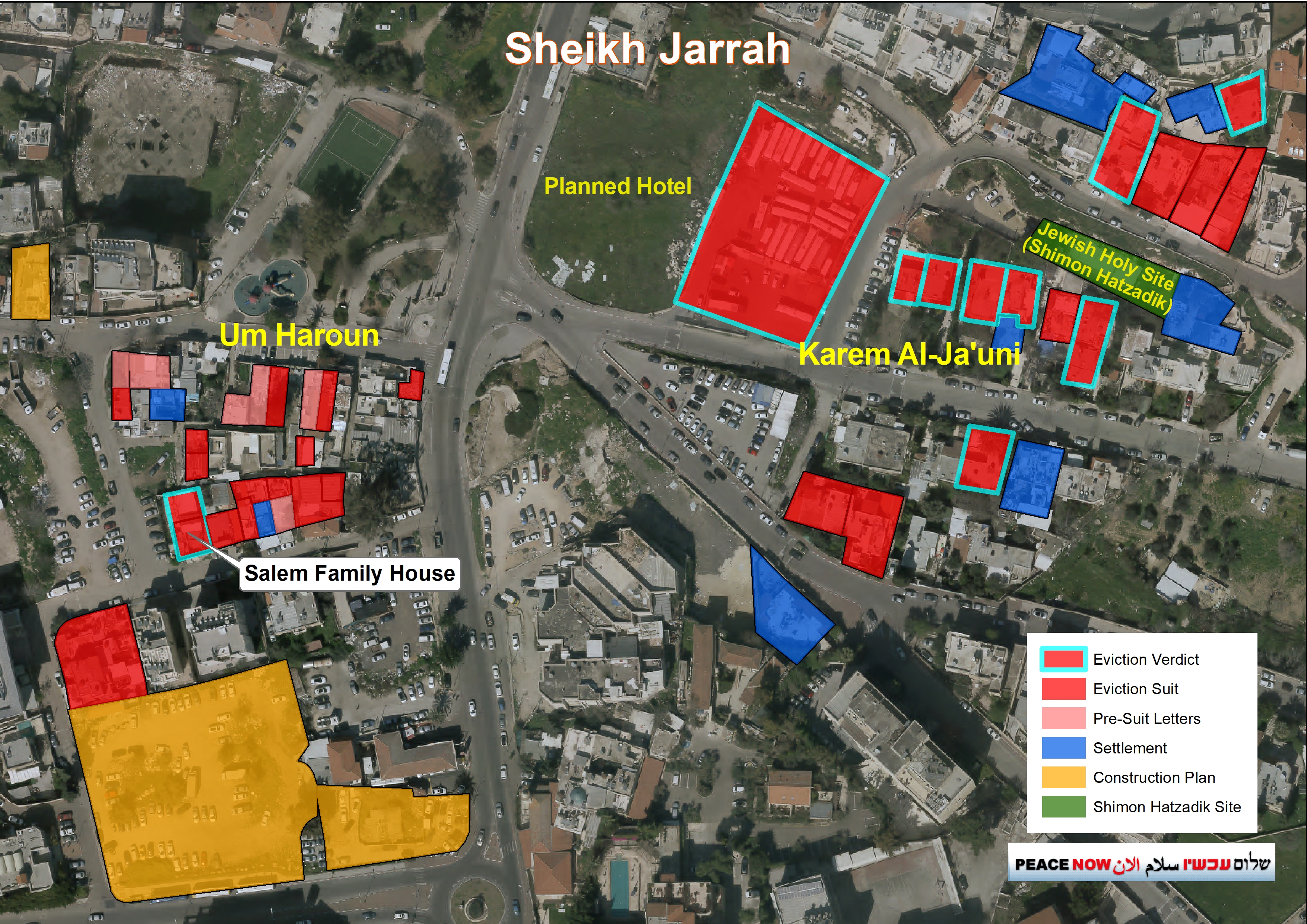 The story of the Salem family home:

Before 1948 – The Salem family’s parents lived in a house in Jaffa until 1948, but during the war they were forced to leave Jaffa and Israel forbade them, like all other Palestinian refugees, to return home. Later, the “Absentees’ Properties Law” was enacted, which allowed the State of Israel to take ownership of the Palestinians’ property.
In the Umm Haroun area in Sheikh Jarrah, there was a small Jewish neighborhood called “Nahalat Shimon” with about 40 Jewish families. During the war in 1948, they were forced out of the neighborhood due to the deteriorating security situation, and all of them received alternative housing in Israel from the Israeli authorities in the west of the city.

1951 – At the end of the war, the Sheikh Jarrah neighborhood was under Jordanian control and the Jewish properties were managed by the Jordanian Custodian of Enemy Property, who rented them to Palestinians such as to the Salem family. Fatma Salem, the mother of the family, was born in the house in 1952 and lived there to this day with her three sons, their wives and children (a total of 11 people including 4 children).

1967 – Immediately after the 1967 war, the Israeli government annexed the Sheikh Jarrah neighborhood to Israel, along with the rest of East Jerusalem, and transferred the management of these assets to the Israeli Custodian General. The Custodian General continued to lease the properties to the Palestinian residents.

1970 – In 1970, the Knesset enacts the Legal and Administrative Matters Law (1970), which effectively stipulates that Jewish property owners who lost their property in East Jerusalem in 1948 can attain it back from the Custodian General. In practice, there were no Jewish property owners who returned to live in their homes in East Jerusalem. This law was used only by settlers who used it to deprive Palestinians of their property and replace them with settlers.

1980 – In 1980, the heirs of the Jewish family who lived in the house before 1948 received the ownership of the house from the Custodian General in accordance with the 1970 law. The Salem family continued to live in the house as protected tenants and paid the heirs rent.

1988 – After Fatma Salem’s parents died, the heirs filed an eviction suit against her, claiming that only her parents were protected tenants and that she has no right to continue living in the house. The court ruled in favor of the heirs and ordered the eviction of the house, but the verdict was not enforced and the Salem family continued to live in her home.

2010 – In 2010 settlers purchased half of the rights in the house from the heirs, who undertook to take care of the family’s eviction. After several years in which the heirs delayed in completing the evacuation, the settlers filed a lawsuit against them in the Magistrates’ Court, as a result of which the heirs returned to take action against the Salem family.

2021 – In June 2021, an eviction request was filed against the Salem family in the Execution Office based on the 1988 ruling, and the eviction date was set for December 29, 2021. On 5/12/21, city council members Yonatan Yosef and Aryeh King, two key settlement activists in the sheikh Jarrah, personally handed the Salem family the eviction notice (Yonatan Yosef himself purchased the rights to the home).

Due to the police’s request to change the date of the eviction in order to allow it to be better prepared, the settlers requested to set on a new date and on 30/12/21 a hearing was held at the Execution Office. The Salem family argued that the eviction should be revoked for several reasons, including the statute of limitations (the eviction ruling is from 33 years ago and has not been implemented to date). Yesterday the Execution Registrar decided to dismiss all the family claims and ruled that the eviction would take place between March 1st and April 1st, 2022.

The meaning of an eviction in Sheikh Jarrah

Hundreds of other Palestinians in Sheikh Jarrah and Silwan are in various stages of eviction claims by settlers seeking to take over their homes and establish a settlement in their place. In recent months, the struggle of Sheikh Jarrah residents has reached the international agenda, and was even in the background of the events of May 2021.

Never since 1967 has Israel acted to dispossess entire communities in East Jerusalem and replace them with settlers. There have been evictions of homes on various occasions, but not an organized move designed to dispossess thousands of people. Moreover, in Sheikh Jarrah’s story lie the primordial wounds of the conflict, and the fear of both sides of displacement and dispossession. For Palestinian families, most of whom are refugee families, the potential eviction is like a second Nakba and it evokes strong feelings among Palestinians.

The matter is not legal but political. Here is how the government can stop the eviction.

The government will probably claim that this is a private case of a real estate dispute between two private parties and that there is no place to intervene, but the truth is that Government bodies assisted and orchestrated the whole situation the enabled the eviction cases. The government has a duty to stop the evictions not only because of its responsibility for the situation that led to the eviction claims, but also to ensure Israel’s public interests, of maintaining stability in Jerusalem, ensuring the livelihood of the Palestinian communities in East Jerusalem,  enabling a future of peace and two states.

The government has the authority to stop the evictions as follows: In the immediate term the government can prevent the evacuation by refraining from sending the police to accompany the eviction. Every eviction of a family from their home in East Jerusalem requires police escort. The Attorney General has previously confirmed that the police can refrain from carrying out evacuations if there is a fear of harm to public order or political and public interests. The government can stop the evacuation simply by preventing its actual implementation.

In the long run, to eliminate the danger of eviction once and for all, the government can use its authority to expropriate the property from the settler owners, give them adequate compensation for the loss of the property, and allocate it to Palestinian families. This is the fairest and simplest solution that can solve the situation of hundreds of other families in Sheikh Jarrah and other places in East Jerusalem, who are groaning under legal proceedings filed against them by settlers in an attempt to take over their homes.

Expropriation is not uncommon. Since 1967, the Israeli government has expropriated about 24,000 dunams in East Jerusalem (mostly from Palestinian owners) for the purpose of establishing neighborhoods for Israelis; It is only fair today to expropriate dozens of dunams from settlers and let Palestinians continue to live in their homes. Such an expropriation was also approved by the Attorney General in the past.