After an exhausting and costly legal battle of 24 years, settlers from the Elad association, assisted by large police forces, entered today (July 9th, 2019) the home of the Siyam family in Silwan (Wadi Hilweh). At the beginning of the eviction, the police arrested Jawad Siyam, one of the community leaders of Silwan and resident of the house. After his detention, he was banned from entering Silwan (and from his own home) for two days even though there were no charges or accusations against him.

Peace Now, together with other groups (Free Jerusalem, Ir Amim, All That’s Left and others) will hold a demonstration in Silwan, near the Siyam house on Friday, July 12th, at 11:00.

Immediately after the settlers entered, they began to erect a metal wall on the roof of the house and in the courtyard to separate them from the other parts of the house of the Siyam family. Now the settlers live in one compound with the Palestinian family, with shared walls and separate entrances.

The family went through four legal cases where the settlers claimed that they had bought the whole house of Syiam family but the settlers’ claim was rejected. However, in the fifth case, the settlers succeeded in convincing the court that they had purchased parts of the house. Today the verdict was executed and the family, a single mother and her four children, was evicted from her home in favor of the settlers.

For further information on the legal circumstances and proceedings, see here.

Peace Now: The evictions of Palestinian families in Silwan and in other Palestinian neighborhoods in East Jerusalem are not only evil but also bad for Israel and the chances for a peaceful solution in Jerusalem. The efforts of the settlers to take over Palestinian properties and the assistance they receive from the authorities are undermining the stability of Jerusalem and possibility for a two states solution.

Yesterday (9 July), settlers entered a large three-story Palestinian house with 6 apartments in A-Suwani neighborhood (near A-Tur / Mount of Olives). The building is located next to the Beit Orot settlement, which houses dozens of students and a residential compound of 32 apartments.

According to Palestinian reports, the Palestinian family living in the building has been living abroad in recent years, and the settlers claim that they purchased the house from them.

Eviction order for a Palestinian family in Jabel Mukaber

An elderly Palestinian couple living in a house in Jabel Mukaber received an eviction notice from the Execution Office demanding that they vacate their homes by the end of this month (July 2019). If they do not evict by then, the police will be ordered to evict them by force in the near future.

The house is located in the Al-Farouk neighborhood of Jabel Mukaber, near the UN headquarters in Armon Hanatziv, between two houses that settlers entered into in 2010 and in 2012.

The settlers claimed that they purchased the family’s two houses and a large yard (about 700 square meters), but after a lengthy procedure, the District Court ruled that the settlers had not succeeded in proving that the seller owned the whole plot and that at most he had owned small parts of it.

The Court ruled that the settlers would get only one house and that the rest of the plot (including the second house and the yard) would remain in Palestinian hands.

Here too, as in the case of the Siyam family, one can see the method in which settlers take over properties in East Jerusalem: The settlers manage to purchase a certain part of the property, but they argue in court that they had purchased it all, presenting a series of evidence and documents. As in the case of the Siyam family, after long and expensive discussions, the family manages to prove that the settlers’ share is much smaller (in fact only about 6% of what they claimed). 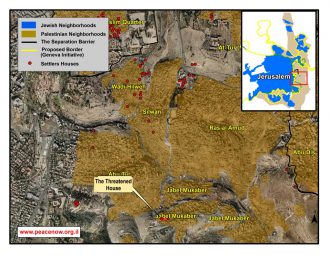 Settlers putting up a fence on the roof of the Siyam family house, 10/7/19