Peace Now, Ir Amim and the Association of Environmental Justice in Israel are jointly filing an objection to the Higher Planning Council of the Civil Administration against construction plans for some 3,500 housing units on E1. The organizations have in parallel launched a campaign (along with the NGO, Mechazkim) calling on the public to sign the objection, and within a few days it had already been signed by more than 1,500 objectors.

On the eve of the last election, Prime Minister Netanyahu ordered the advancement of construction plans on E1, following which plans No. 420/4/7 and 420/4/10 for the construction of 3,412 housing units were published for deposit, in an area east of East Jerusalem, in the heart of the West Bank. Any public objectors have until 28 August 2020 to submit their objections.

Construction in E1 is considered essentially fatal to the prospect of a two-state solution because it divides the West Bank into two – a northern and a southern region – and prevents the development of the central Ramallah-East Jerusalem-Bethlehem metropolis in the West Bank. Even from an Israeli development and planning perspective, a settlement in E1 will do more harm than good and it may lead to the weakening of Jerusalem economically and socially.

The main arguments of the objection:

The objection was prepared by the architect Uri Reicher, who specializes in regional planning, and Palestinian planning in the West Bank in particular. 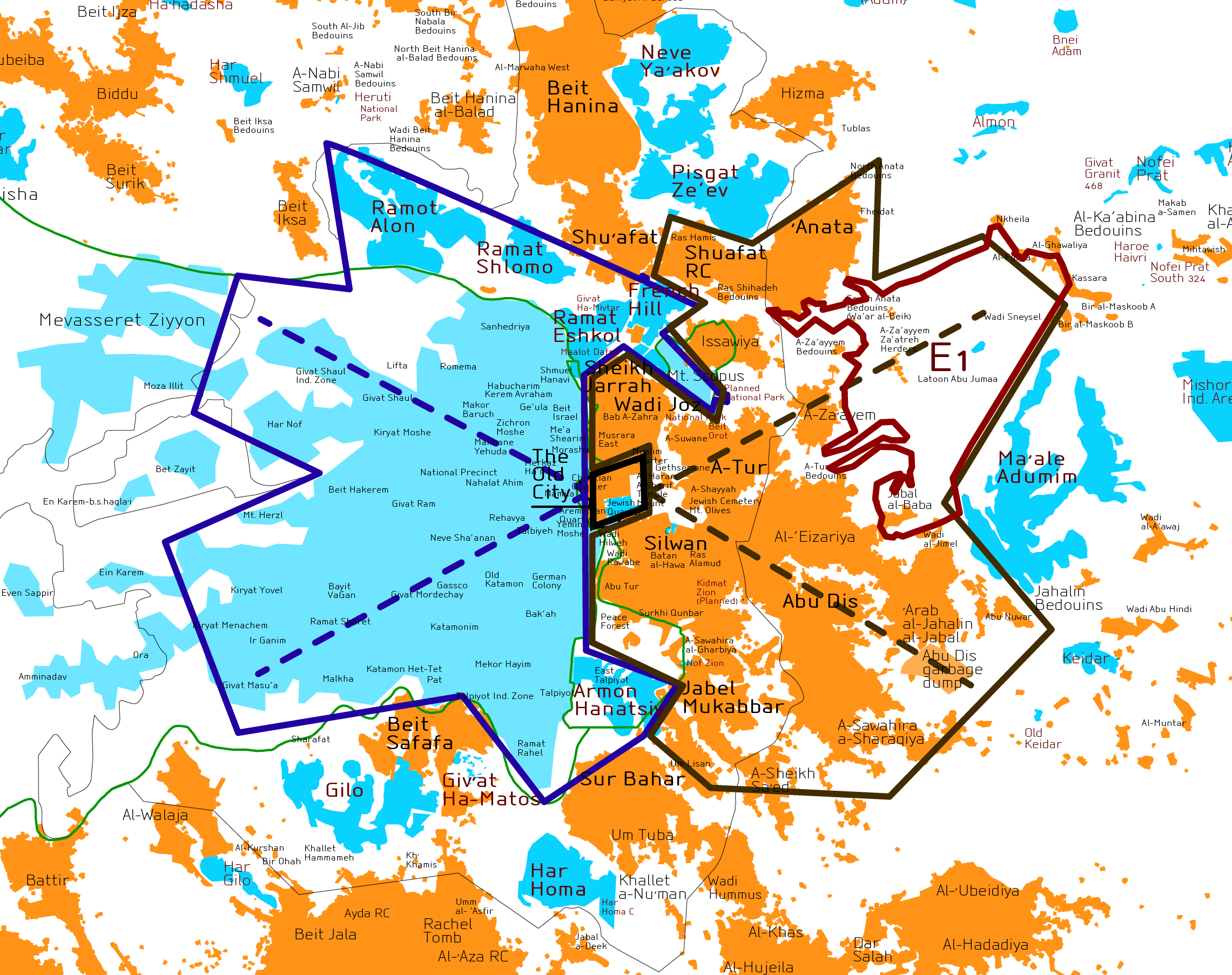 C. A settlement in E1 would hurt the development potential of central Palestinian metropolis between Ramallah-East Jerusalem and Bethlehem
E1 is important not only for East Jerusalem, but for the entire metropolitan area. The area from Ramallah, East Jerusalem and Bethlehem is the central economic, public and cultural metropolis of the West Bank as well as the historical, governmental and touristic center of the West Bank. E1 is one of the only land reserves left in the heart of the metropolitan area, and therefore has special development potential and much more significant function relative to other land reserves. For example, the travel distance to employment centers, the ability to serve a number of larger neighborhoods and cities around it and more.

D. A Settlement in the E1 would hurt the development potential at the regional level of the entire West Bank
Not only the Ramallah-East Jerusalem-Bethlehem metropolis is within commuting distance of the E1 (reasonable daily commuting distance to the workplace), but also other towns and cities such as Jericho in the east and Biddu in the west. Area E1 is located in the heart of the length strip between Jenin and Hebron along Highway 60 of the West Bank. This strip is the main strip for development at the regional level (the development in other strips such as in the Jordan Valley is not similar in quality to the development in the central strip). Area E1 is also on the Jerusalem-Jericho road at a junction with crucial regional importance, and is a potential regional hub connecting Jericho (and eventually Jordan), with the north and south of the West Bank, adjacent to major roads. Such an area can be used for unique regional uses that are not possible in other areas – such as a central business district, a main transportation center, a national stadium, governmental institutions and open spaces mixed with housing and employment.

E. Israeli construction in E1 will constitute blatant discrimination and infringe on the right to equality
In the 53 years of Israeli rule in the West Bank, a policy of blatant discrimination has been adopted in everything related to land allocation, planning and construction. For example, while Israel has established more than 130 official settlements, dozens of Israeli industrial areas, quarries, tourist sites and more, not a single settlement has been established by Israel for the Palestinian population. Of the hundreds of thousands of dunams of state land allocated for various uses in the West Bank, 99.8% were allocated for Israeli use, and only 0.2% were allocated to Palestinians. In its ruling on the Expropriation Law (Regulation Law) on June 2020, the Israeli High Court ruled that this discrimination is unlawful, and that Palestinians have the right to equality. Construction in E1 for Israelis would constitute discrimination and in this sense also a violation of international law.

F. In terms of Israeli development, E1 is geographically detached from any Israeli locality
E1 is connected to West Jerusalem and Ma’ale Adumim by an intercity road, with no possibility of integral development. In fact, this is another suburb of Jerusalem cut off from the city that can be built just as much anywhere else around Jerusalem.

G. A settlement in E1 would weaken Jerusalem and would deplete its business population – As in other suburban cases, a “donut” is formed in which the city center is the weakest part. The development principles set forth in the Prime Minister’s Office as a national policy speak of the concentration of Jerusalem’s development in the city itself, in urban renewal and in strengthening the center rather than in the suburbs. 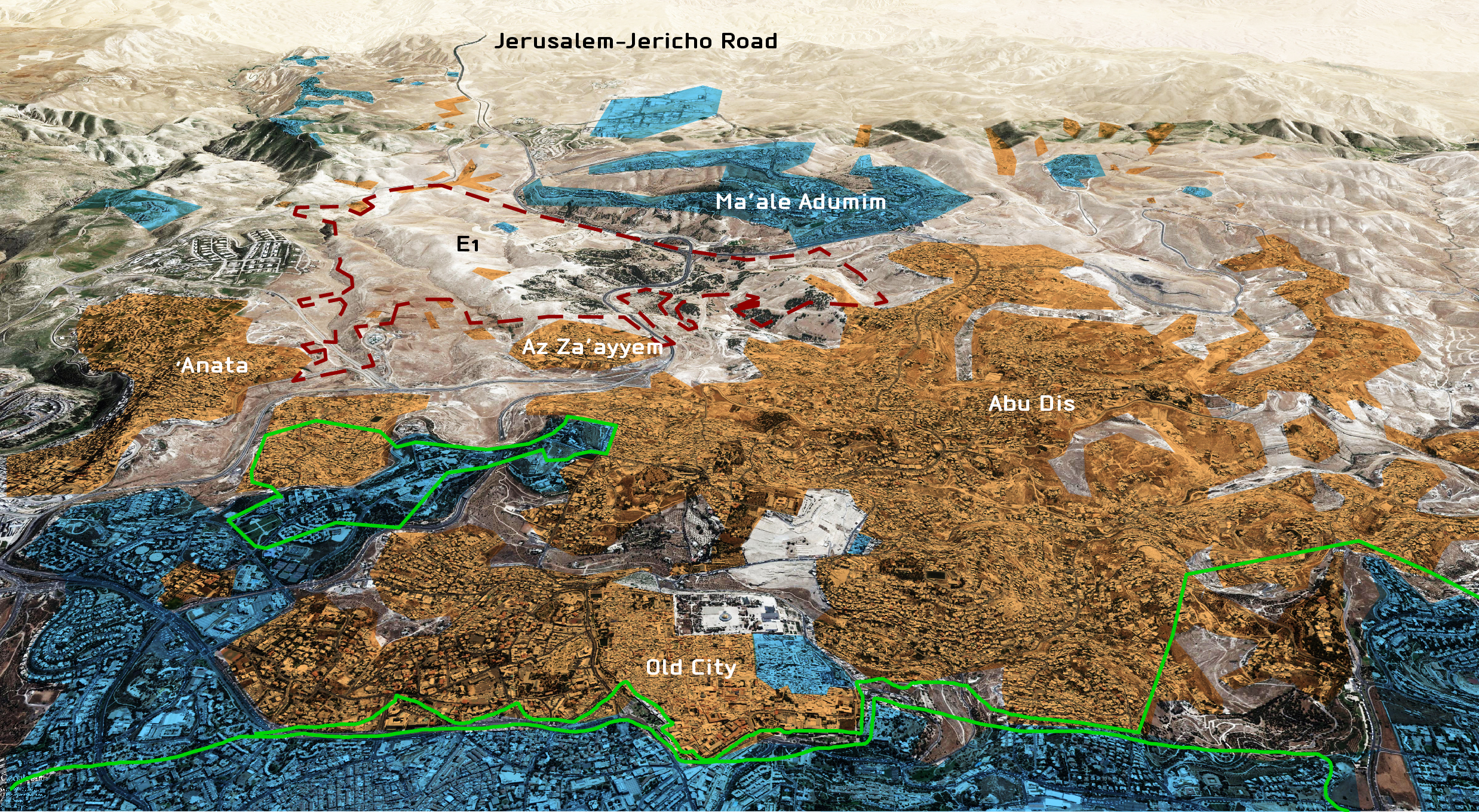 E1’s detachment from the West Jerusalem urban area (blue), and its centrality to the Palestinian urban area (orange)