The Jewish National Fund issued a tender “for providing of real estate files analysis services and the of real estate registration for Hiemanuta Ltd. and the JNF.” This means that a process will soon begin to take over large-scale land within Israel, the West Bank and East Jerusalem. According to the JNF, it has about 17,000 property files in which there may be documents that indicate purchase transactions and properties that can be realized if they undergo a suitable bureaucratic and legal procedure. Among these files are also about 530 files in the West Bank, and about 2,050 files in East Jerusalem. The tender is designed to select the people who will carry out the bureaucratic procedures required for the realization of potential assets.

It should be noted that about a year ago, the JNF board of directors decided to allocate NIS 100 million for the purpose of these registration procedures. The move in the Occupied Territories has the potential for a significant expansion of the settlements, and in East Jerusalem there is a danger of evicting hundreds and possibly even thousands of Palestinians from their homes, similar to the procedures currently underway in Sheikh Jarrah and Silwan.

Peace Now: The Jewish National Fund is becoming the Settlers’ National Fund. The registration procedures in the Occupied Territories and in East Jerusalem could bring to massive dispossession of Palestinians, like in Sheikh Jarrah and Silwan, and expansion of the settlements. The JNF- KKL is a national institution for the entire Jewish people which should not serve one side of the political map as it puts facts on the ground that endanger the state of Israel. There is no connection between taking over properties in the Territories and East Jerusalem and the JNF original goals and unfortunately the representative of the different Jewish organizations in the JNF allow settlers to use the JNF as if it were a tool for realizing their goals and financing the settlements.

It will be recalled that in recent years the JNF has been involved in dubious purchase transactions of land in the West Bank amounting to tens of millions of shekels. It turned out that members of the KKL-JNF board from right-wing parties managed to take millions of shekels from the JNF without the board’s knowledge for purchase transactions in the West Bank (for more information, see Hagar Shiezaf’s investigation in Haaretz). Although the purchases in the West Bank were officially frozen until an orderly decision was made on the matter, Peace Now has learned that the JNF management committee recently approved the completion of another transaction of land in the Jordan Valley.

The project of land registration in KKL- JNF

The details of the project of land registration of the JNF were exposed in the agenda of the Board of Directors of JNF from August 2021. According to the agenda, the plan was to allocate 100 million NIS from JNF’s budget over the next five years in land registration project. The project aims to seek in the JNF’s records, lands and deals which hadn’t been completed or registered in the deed office, and try and further their completion and registration. According to the project proposal, the JNF has about 17,000 files of documents in which there might be documents that testify for deals and properties that can be implemented, if they go through an appropriate bureaucratic and legal procedure. Among those files which are to be examined and registered, there are also approximately 530 files in the West Bank, and 2,050 files in East Jerusalem.

In the proposal for the decision it was written:

According to initial estimation, it seems that 88% of the files [of purchase records] didn’t get to be completed (a proposal, negotiations etc.), but, at the same time, the documents should be studied deeply in order to establish whether there was an intention for a deal from a legal perspective [which could be sufficient for registration …] In addition, on the basis of past experience in conduct in the courts, the vast majority of the cases ended by registering rights in JNF- KKL’s name and/or its subsidiaries. It will be noted, that up to the time of writing, hundreds of these cases ended in successful registration.

This means, that in some of the cases the documents only show intent to broker deals, and/or a negotiation that didn’t become a deal, and yet, legally, it could be argued that intent for a deal existed, and on this basis the land could be registered in JNF’s name. in addition, according to the JNF, past experience shows that JNF succeeds in convincing the courts to register properties in its name and the chances to succeed in various files is great.

In the West Bank

The properties in the West Bank have mostly been purchased after 1967 by a JNF- KKL subsidiary called “Himanuta” which is registered in the Civil Administration, while a minority of the properties were purchased by JNF- KKL in the West Bank before 1948. According to JNF- KKL’s estimation, of all these files, about 170 can be registered and executed. The meaning is that if they can register these lands in JNF- KKL’s name, they can be used to expand settlements. An example for using JNF- KKL’s lands recently was in the a-Nahla area AKA “E2”. The Ministry of Housing is furthering planning on a territory bought by Himanuta, and thus bypasses the need to wait for legal proceedings which are taking place against the use of declared “state lands” in the area.

An example for land dating before 1948 which JNF- KKL managed to register is on an area of hundreds of dunams in the Bethlehem area. In 2012 Himanuta (owned by JNF- KKL) filed a lawsuit in the District Court demanding to be declared the owner of 522 dunams in the Bethlehem area, based on an acquisition deal dating before 1948. The Palestinian land owners claimed that they were the rightful owners and the two parties presented to the court Kushans (ownership documents which date from the British Mandate period) which show that they are the owners. The dispute centered on the size of the land and its exact location. Despite the fact that the kushan notes the land is 74 dunams, Himanuta succeeded in convincing the court that the real property it owns is 522 dunams, and the land was registered in its name. Settlers and politicians celebrated this victory and saw it “Gush Etzion land expansion“, and these lands are planned to be used for a massive expansion of settlements in the area.

In East Jerusalem the properties in question are 2,050 properties of 2,500 dunams which were acquired or were in the process of acquisition by JNF- KKL before 1948. In the decades that had passed since, under the Jordanian government and then under Israeli control, hundreds and presumably thousands of Palestinians moved into these properties in a variety of circumstances. It can be assumed that the majority of these properties were vacant before 1948, rather than used as housing. Similarly to the eviction lawsuits in Sheikh Jarrah and Silwan, the JNF- KKL is seeking to base its claims on the discriminatory law legislated in 1970 (The Legal and Administrative Matters Law) which enables Jews to return to the properties they had lost in East Jerusalem in 1948, while the Palestinians do not have this right. JNF- KKL’s aim is to apply to the General Custodian, who is legally responsible for these properties in East Jerusalem, and receive property management rights from him. After that, they can file eviction lawsuits against Palestinians who live in these properties.

In the explanation of the project it seems that parties within the General Custodian are encouraging the move:

Lately, we have been approached by the head of the Economic Unit at the General Custodian, which is dealing with these properties today, and announced that they demand that JNF- KKL releases JNF- KKL’s properties, and the General Custodian forgoes the management fees of 5% as legally due […] it will be noted that some of the properties are expropriated, some are built, some are occupied by private personae, some are non-located  or have unclear physical status.

It should be noted that the General Custodian’s behavior in East Jerusalem (and especially the director of the Economic Unit) have been severely critiqued over the years for their part in assisting settlers and dispossessing Palestinians, from the findings of the Klugman Government Commission of Inquiry, and up to the Supreme Court judgment in the case of Batan al Hawa in Silwan.

For the registration project in East Jerusalem a budget of 6,230,000 NIS is requested over 4.5 years.

ٌRead more about KKL-JNF at the research by Maya Rosen and Daniel Roth: A Progressive Jewish Response to the Discriminatory Policies of JNF-KKL 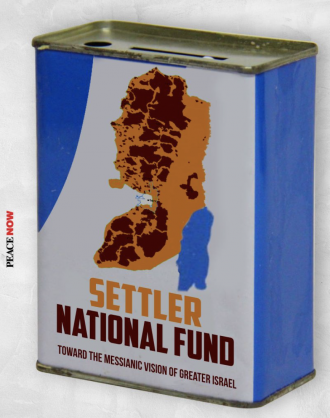