A. Official data from the Civil Administration (till 2018):

According to data provided by the Civil Administration following freedom of information requests (mainly by www.bimkom.org), in the decade between 2009 and 2018: 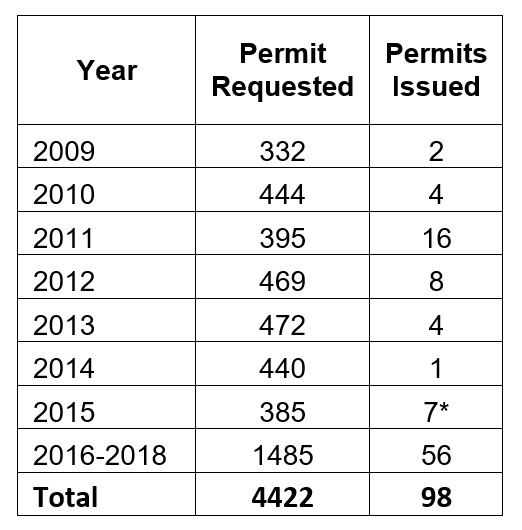 * the 7 permits in 2015 are permits that were approved, we don’t have data on how many were issued.

In years 2009-2018 – 98 construction permits for Palestinians were issued out of 4,422 requests for permits that were filed. These permits can be for housing, industry, agriculture, infrastructure etc. A few dozen of the permits that were issued between 2016 and 2018 were for the construction of the alternative homes for the Khan Al-Ahmar residence that were supposed to be forcibly relocated. The houses have yet to be built.

B. Data from the Protocols of the Civil Administration Planning Committees:

It is very hard to receive data from the Civil Administration. Sometimes it takes months or even a year to get an answer, which in many times is partial. Another source of information is the protocols of the Higher Planning Council of the Civil Administration and its subcommittees, which only in the last couple of years started to be published regularly online.

The information from the protocols is only about approvals and not about the very issuing of permits. The information is only on those cases that were discussed (we don’t have information about number of requests filed), and not always can we know the exact number of units requested.

1. Appeals against demolition orders after they were rejected at the Inspection Subcommittee:

* the one appeal that was not rejected allowed the Palestinians to file a detailed plan to try to approve the construction.

The permits approved include: 10 permits for agriculture or industry structures, one for a higher education structure in Al-Bireh, one for a solar panel, one to build 6 housing units in Elazariya and one to add a floor on an existing house in Elazariya.

3. Plans for retroactive approvals (after a demolition order was issued):

The plans approved were only two plans: a plan for a cement factory in Mazra’a Al-Sharqiya, and a plan for 6 units in Battir (This plan was approved for deposit in 2019 and approved for validation in 2020).

The plans approved include: A factory in Anata; A resort in Qabatya; changes in the plan for the new site of Khan Al-Ahmar and water infrastructure for it; A clinic in Beit Jala; adding two housing units and building a hotel in Beit Jala; 2 housing units in Elazariya, 10 housing units in Beit Hanina lands (in area c); an industrial area; a gas station in Harmala; an industrial area in Beit Fajjar; A plan for 35 units (some of them are already built) in Al-Arus (Zif); and a plan for c; 210 units (40 of them already built) in A-Tuwani.

The most significant plans, with housing units are in Al-Arus (Zif) 35 units, and in A-Tuwani 210 units + another 14 units in other places.

At the same time in Settlements:

In years 2019-2020 the HPC approved plans for 16,098 units in settlements. In addition, the municipalities of the settlements issued permits for AT LEAST 2,233 housing units (according to the partial data published by the Israeli CBS).

There were two hearings in the Planning and Licensing Subcommittee in 2021 but no protocol was published yet. One hearing was of 15 appeals against demolition orders and on the other hearing from 17/1/21 we published the following summary:

According to reports, the Prime Minister’s Office today asked to cancel the hearing due to settlers’ pressure. This is in addition to the pressure put by settlers last week which led to the removal of three plans for Palestinian villages from the committee’s agenda.

Is there any change in the trends in terms of planning for Palestinians?

The small scandal at the day of the meeting of the Planning and Licensing Subcommittee in 17/1/2021, in which the Prime Minister tried to prevent the subcommittee from convening, comes after some talks about potential approval of plans for Palestinians and some strong pressure to prevent it by settlers and right wing activists. Although nothing seams to have changed, and no significant planning was approved, there might be a sign for some small effort to allow some plans for Palestinians, which we didn’t see in the past.

First of all, the plans that were brought to discussion: Al-Arus (Zif) village (35 units), A-Tuwani village (210 units), Hizma village (140 units) and Walajeh (unknown number of units) – Those plans, for retroactive approval of some homes in addition to adding some new ones, although they are like a drop in the sea, far from starting to meet the needs of the Palestinians in Area C, still we rarely saw such plans in the past. In addition, one week before the meeting of the committee on 17/1/21, the agenda included also three more small plans that were removed of the agenda following the settlers’ pressure.

It is hard to tell whether it was an effort to change the trends or not. There were in past, some voices from the Ministry of Justice claiming that Israel must approve more to Palestinians if it wanted to avoid an investigation of the International Criminal Court and the accusations of Apartheid. For that reason, in 2019 the Israeli Cabinet decided to approve 700 units for Palestinians (until now it didn’t happen).