Following the attack on Israeli settlers near the settlement of Ofra on Sunday (December 9th, 2018), Israeli ministers and politicians, including Justice Minister Ayelet Shaked, called to legalize the Ofra settlement.  Following is an analysis of the implications of such a move:

Even though Ofra was established by government decision, most of the houses of the settlement were built on private Palestinian land, by taking the land from their owners and against the law.

Ofra must not be legalized because:

Peace Now: “Elements in the Israeli government are cynically exploiting a heinous attack in order to score ideological points, and to sabotage in every possible way the chances of reaching a final status agreement. Regulating the Ofra settlement, of which most housing was built on stolen private Palestinian land, would send a message to lawbreakers in the West Bank that everything is permissible for settlers – even the theft of private land.”

Founding and Expansion of Ofra

1975 – The government, led by Defense Minister Shimon Peres, decided to establish a settlement on the grounds of a Jordanian military base on the lands of the villages of Ein Yabrud and Silwad. The settlement houses were built on private Palestinian land registered in the Land Registry (similar to Amona and Migron). All of the construction that was done over the years in Ofra was without legal building permits.

2008 – Nine new houses are being built in Ofra. The Palestinian landowners, with the assistance of Yesh Din, filed a petition against the construction. The High Court of Justice ordered the demolition of houses in light of the fact that they were confirmed to have been built on private land. These housing structures were demolished in 2017.

2011 – Amana (the right-wing settlement contractor) begins a construction project for dozens of new housing units in Ofra on land that had been confiscated by the Jordanian government in the 1960s for the construction of a military base. The project itself did not have an outline plan, and the buildings did not have legal building permits. The Palestinian landowners filed a petition to the the High Court of Justice and the illegal construction in Ofra was frozen for several years until the government completed the planning for construction on the confiscated land.

As of today, most of the houses in Ofra are still illegal and on private Palestinian land, including:

These structures cover an area of about 550 dunams of private land. In addition, Ofra includes hundreds of dunams of open land, agricultural processing, roads and infrastructure.

Map of construction in Ofra, on an aerial photograph: 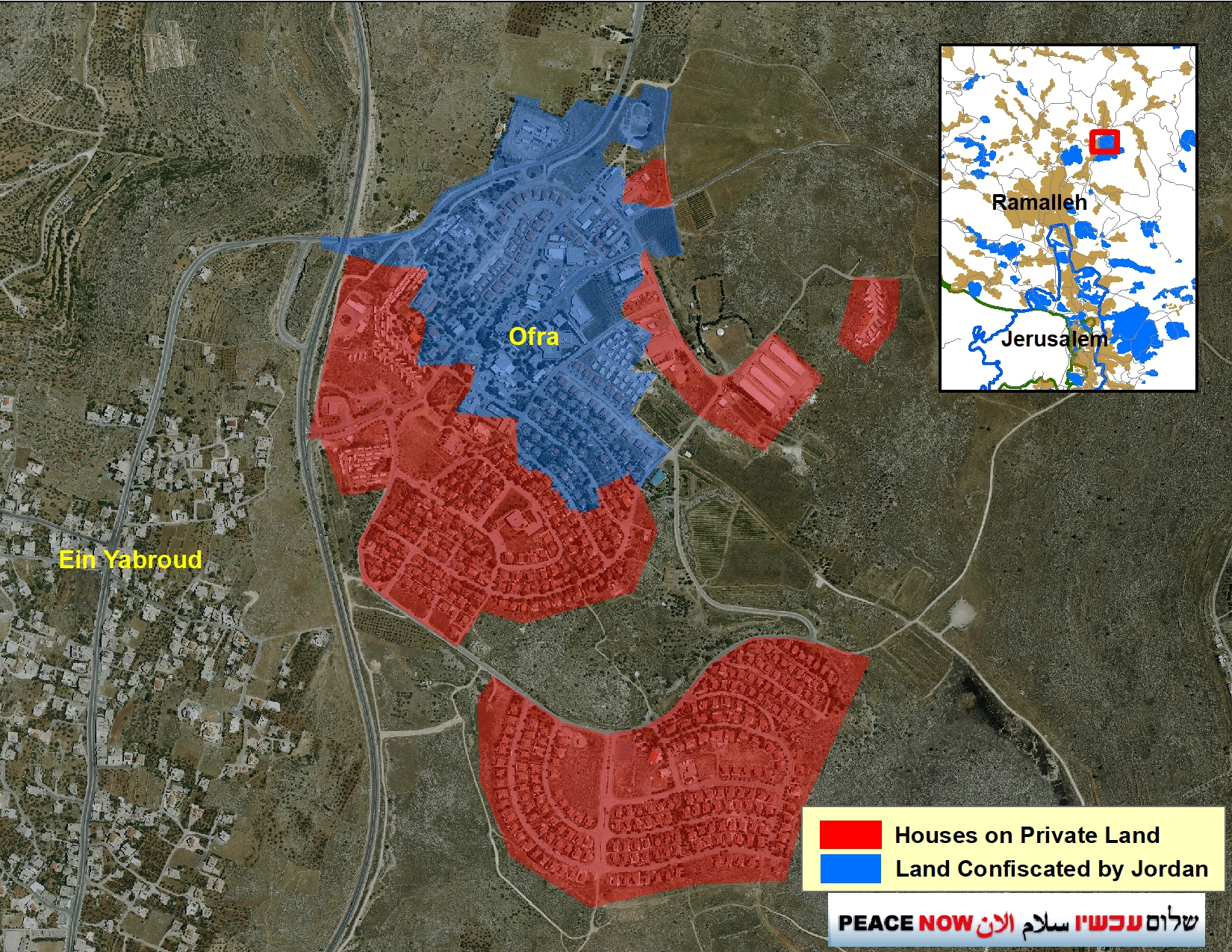 A serious violation of the possibility of reaching a peace agreement based on a two-state solution – The Ofra settlement is located deep inside the West Bank, some 25 kilometers from the Green Line, in between several Palestinian villages near Ramallah. In virtually every possible future two-state agreement, the State of Israel will be forced to evacuate the settlement because otherwise it would be a serious blow to the territorial contiguity and development of a future Palestinian state. It is important to emphasize that this is not only the legalization of the existing structures, but the approval of future building plans that will expand the settlement and build dozens of additional housing units there. The addition of homes and families in Ofra will also hamper the chances of reaching a future agreement.

Award for criminality – The Israeli government repeatedly conveys a problematic message regarding the rule of law when it comes to settlers. The fact that the Settlement Division, the Binyamin Regional Council and other governmental bodies participated in the crime of land theft and the illegal construction of the settlement, makes this message even more severe. The Israeli government’s support for the actions does not eliminate the trampling of the law that has been taking place in Ofra for decades. Whereas the rule of law is the guiding principle of any democratic society, when it comes to the settlements, the Israeli government disparages the law, and sends a message that crime pays, and that the continued licentiousness of the drivers of the settlements is legitimate.

Denial of Palestinian property rights – Most of the houses built in Ofra (approximately 413 out of 625) were built on an area of ​​550 dunams of privately owned Palestinian land. In addition, hundreds of dunams of Palestinian private land were seized for roads in Ofra, as well as infrastructure and agricultural lands for the settlers. The only way to regulate the theft of these lands would be to expropriate them from the Palestinian landowners for the benefit of the settlers, in complete contradiction to the positions of previous Israeli governments and legal advisors, and contrary to binding rulings of the High Court. Although the current legal advisor (Avichai Mandelblit) allowed land expropriation in some places for settlement purposes (for example, in Haresha), in the regulation of massive land theft such as in Ofra the Israeli government would be crossing a new red line.

Cynical exploitation of a heinous attack – A repeated practices in the Israeli government is to cynically and outrageously exploit terror attacks to take new steps on the settlements that for political reasons it had refrained from doing. To be sure, this is a surrender to an extreme and messianic minority that will only entrench the occupation and contribute to an apartheid reality in the West Bank, even when the international consensus and Israel itself claims a Palestinian state will be established in the future. The pain of the terrible attack on 9 December outside Ofra must not be a substitute for a public discussion of the implications of such a blatant legalization of the theft of private Palestinian land and its political implications for Israel’s future. Retroactively legalizing Ofra would make it clear to everyone that the government does not intend to advance a peace agreement, but only to deepen its hold on the West Bank and prevent the possibility of establishing a Palestinian state alongside Israel. If the government regulates Ofra it will encourage a violation of the law and send a message to the settlers that everything is permissible and that criminality pays off.