To download a map of West Bank settlements and outposts.

Outposts
Outposts are, essentially, settlements established by governments of Israel since the 1990s in an unofficial and illegal manner. In 1996, the government decided not to build new settlements; but in order to skirt political and international obligations, it established unofficial settlements, calling them “illegal outposts” or “unauthorized outposts.”
• Number of outposts: 99 outposts throughout the West Bank.
• Number of settlers in the outposts: Peace Now estimates that over 4,000 settlers are living in the outposts.
• Occupation of privately owned Palestinian land: 80 outposts are located fully or partially on land privately owned by Palestinians. Of these, 16 are located, in their entirety, on private land.
• Number of structures in the outposts: Peace Now estimates that the outposts contain approximately 1,600 mobile homes and 270 permanent structures.
To download the full list of outposts.

Following domestic and international criticism about the continued construction and expansion of outposts, Prime Minister Sharon appointed Attorney Talia Sasson to prepare a comprehensive report on this matter. On March 8, 2005, after months of intense work, Talia Sasson presented the Prime Minister with a report that contained the following conclusion: “The outposts are mostly established by bypassing procedure and violating the law, displaying false pretense towards some of the State authorities, and enjoying the cooperation of other authorities in harsh violation of the law.”

The Settler Population
• Population growth: The annual rate of growth of the West Bank settler population has been approx. 5% in recent years, as opposed to 1.8% in Israel as a whole. In other words, the rate of population growth in the settlements is nearly three times that of the overall Israeli population. 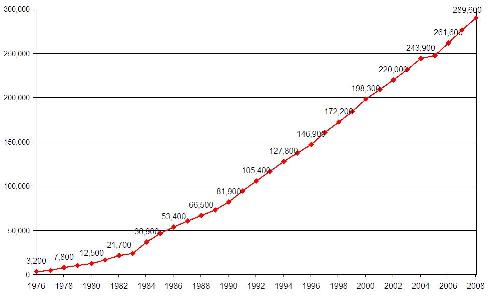 For more information on population growth and claims about “natural growth”.

• Ideological Settlers and Quality-of-Life Settlers: Ideological settlers are those who chose to live in settlements for ideological reasons, to settle the Land of Israel and prevent implementation of a two-state solution. The majority of settlers, however, are“quality-of-life” settlers who came to the settlements for their low housing prices and relatively high quality of life, rather than for ideological reasons. Some 30% of the settlers are ultra-Orthodox and live in cities built especially for them (Modi’in Illit, Beitar Illit, and, recently, Givat Ze’ev Illit). These ultra-Orthodox settlers are, similarly, not ideologically motivated. For more information, click here.

The definition of a population as “ideological” is based on Peace Now’s examination of the settlements themselves. Each settlement is categorized as ideological or non-ideological, ultra-Orthodox, or extremist. While these distinctions are rough and general, Peace Now believes that they describe the current situation accurately: 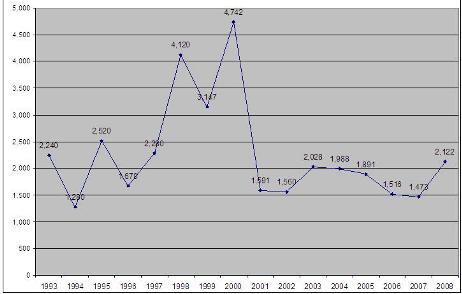 The Separation Barrier
In June 2002, the Israeli government approved the construction of a separation fence with the declared intention of preventing the uncontrolled entry of Palestinians from the West Bank into Israel. In most areas, its construction took the form, essentially, of a wired fence with roads paved, barbed wire attached, and ditches dug on both sides. The average width of the barrier is 60 meters. In some areas, approx. 40 km (5% of the route of the fence), the barrier takes the form of a six-to-eight-meter wall.

Most of the fence’s route lies within the West Bank rather than along the Green Line. In areas where construction of the fence has been completed, there are blatant and wide-scale restrictions on the ability of Palestinians living nearby to move freely and exercise their ownership rights on land lying west of the barrier. Continued construction of the fence within the West Bank, in accordance with a government decision in March 2006, will only further violate the human rights of hundreds of thousands of Palestinian residents.

It seems that given the current stage of the Israeli-Palestinian conflict, continued construction of the fence is inevitable. Nevertheless, Peace Now’s position is that construction must take place only along the Green Line or as close to it as possible, thus avoiding the de fact annexation of parts of the West Bank.
• Length of the fence: The length of the separation fence, as planned, is 790 km, of which 40 km is wall and 750 km fence. Were the fence constructed along the Green Line, its length would be a little over 300 km.
• 60% of the planned fence has been completed.
• The area annexed by the fence: The fence annexes 8.6% of West Bank land to Israel, and 49 settlements with some 190,000 settlers are located there. Remaining on the east side of the fence are 71 settlements with nearly 100,000 settlers.
• The fence’s construction cost: According to Ministry of Finance data for the end of 2008, Israel has spent a total of approximately NIS 8.3 billion (about $1.9 billion) on the fence’s construction. The cost per kilometer is NIS 12 million (and NIS 15 million per kilometer of wall).