Twenty years after the Oslo accords:
The settlements may have destroyed trust between the sides but, they have not destroyed the two-state solution

At a first glance at the population statistics of settlers, you see simply that the number of settlers have tripled since the Oslo accords. However, by looking a bit closer you will see that in fact, most of the settlements with population growths are those that according to the final status model of the Geneva Initiative, will remain under Israeli control in exchange for land swaps. In fact, half of the new settlers since Oslo, moved to only three settlements.

The Oslo Accords were a series of gradual interim agreements, intended to lead to a final status agreement, planned to take place in May 1999. The incremental nature of the process, allowed opponents from both sides to undermine it: in Israel Prime Minister Rabin was assassinated by an extreme right-winger, and on the Palestinian side Hamas continued to carry out terrorist attacks. This led to Israeli elections in which Netanyahu came to power, stopped the Oslo process and did not even start to work towards final status negotiations.

The wording in the agreements regarding settlements was vague and unclear. It simply stated, “Neither side shall initiate or take any step that will change the status of the West Bank and the Gaza Strip pending the outcome of the permanent status negotiations.” (Article XXXI – 7).  During the interim period, no settlements were evacuated. Following the IDF withdrawal from the center of Palestinian cities, the government began to build a system of bypass roads, allowing safe access to settlements during the interim period, until their final fate would be determined in a permanent agreement. These by-pass roads helped develop the settlement enterprise, and thus the Israeli government continued to build in the settlements. This had major impacts on the relations between Israelis and Palestinians; mainly it destroyed the Palestinian’s trust in Israel’s genuine intention to reach a two-state solution. 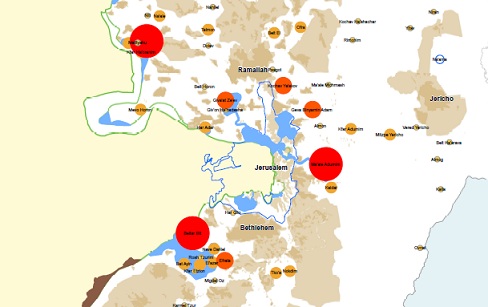 See Map of the Population Growth

Despite the population increases that are undeniable, the settler movement has not succeeded in its attempt to take over the West Bank with Israeli-Jews. Regardless of the plans and expectations made by the government and settler movement, many of these hopes remain unfulfilled. Both secular and religious settler populations refuse to let ideology drive their decision-making.  For example, the ultra-orthodox community was given the settlement of Immanuel, southeast of Nablus, intended as an Orthodox city of tens of thousands. Since Oslo the population of Immanuel has declined from 3,240 residents to only 3,013. Rather, when the settlements of Beitar Illit and Modi’in Illit were established close to the Green Line, the ultra orthodox moved there in the thousands for economic, not ideological reasons.

Similarly, the secular city of Ariel, was intended to be a large city with thousands of housing units and tens of thousands of residents. However over the last 20 years, the population of Ariel has had a stymied growth of merely 6,300 people, from 11,800 residents in 1993 to 18,100 residents today. In fact, Ariel remains smaller than Israeli towns such as Mevasserat Zion, Yokneam Illit, Arad or Migdal Haemek. Ariel’s failure to attract new residents has not prevented the government from investing more in Ariel. In the last years, the government issued tenders for 480 new housing units and even built a university there.

The settlers have failed in their attempt to create irreversible facts on the ground that would prevent the establishment of a Palestinian state. In recent years, under the previous and current Netanyahu governments, there has been an attempt to change that picture by developing more isolated areas and building projects precisely in the areas that will undermine the two-state option. The more time that the government and settler movement has free reign to build and develop isolated areas, the more difficult a two-state solution will come. 20 years after Oslo, they have not won, but the fight for the two-state solution must remain vigilant and determined.