See more at The Migron File.

The site of the Migron outpost, like all  the other outposts, was not chosen randomly. The outpost is situated on a dominant hilltop over road no. 60, the main road that connects the northern West Bank with the southern areas, and between the settlements of Geva Binyamin (Adam) and Ofra (East of Ramallah). 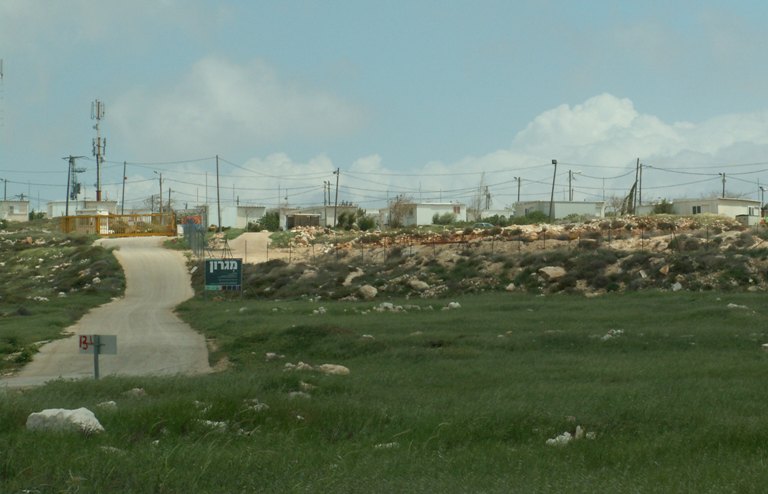 The Migron outpost was established between March-July 2002. The initial action that spurred the establishment of the outpost  was the placement of an antenna that belongs to one of the cellular companies, following settler complaints about the lack of reception in the area.
Since then the outpost has enlarged and expanded in all aspects, including a number of roads, connection to the electricity and water supplies – all under the financial sponsorship of the Ministry of Housing.

Gravest of all is the fact that the outpost was constructed on land that is known to the State of Israel, in its own official land registries, as private land owned by a number of Palestinian families living in the nearby villages of Burqa and Deir Dibwan.

With complete disregard to the law, the settlers established the outpost on private Palestinian land in cooperation with government agencies and under the cover of the police and the Israeli army. Even when the owners submitted complaints to the Civil Administration, their petitions were noted but no further action was taken.

The government-commissioned Sasson Report concluded that more than 4 million NIS of public funds were invested illegally in the outpost.

At present there are approximately 60 caravans on site, most probably financed by the government and given to the Amana organization, and  in the eastern section of the outpost two permanent houses were constructed in recent  years.

Migron is without a doubt one of the largest and most developed outposts in the West Bank today. It is not the only outpost to be found on private Palestinian land, but it is an example of the entire outpost enterprise and the settlers’ complete disregard for the law. Therefore,  it will be the first to stand the test at the Supreme Court.

For the full petition

On 17.12.06 the Sate responded to the petition, where it admitted that the establishment of the outpost of Migron was a mistake, and there was never any authorisation from any official, granted for its establishment. In addition the State admitted the outpost stands on private Palestinian land. The State ended its response by admitting that only two questions remain on the agenda: when to remove the outpost and whether the settlers will do so willingly or if they will be forced to leave by the security forces.
For the State Response

On February 12. 2007 the Supreme Court ordered the state to submit within 60 days an updated report on the steps being taken to remove the outpost . This report should include the results of Defence Minister Amir Peretz’s negotiations with the settlers to evacuate voluntarily and the time frame of the expected evacuation.

On May 1st, 2007 the State informed the Court debating the removal of the Migron Outpost, that Prime Minister Olmert has instructed the Defence Ministry to prepare an outpost evacuation plan within the next 2 months. In light of this the State has requested from the court another 60 days extension in the hearings.
The Prime Minister apparently has asked that the plan be prepared according to evacuation from “the easiest to the hardest” as defined by the following parameters:
A. Strength of opposition expected to the evacuation
B. Outposts that legally can be evacuated immediately
C. Outposts with limited number of residents
D. Outposts constructed on private Palestinian Land
For the State’s statement (in Hebrew) – click here

On May 16th, Peace Now has rejected the State’s response to the Supreme Court. The state has requested more time as they claim they are in the process of creating a “plan” for the removal of all the illegal outposts.
However Michael Sfard, Peace Now’s lawyer has submitted a rejection to the court claiming that this is just another stalling tactic by the government.
In the Migron case there is no dispute over the fact that the housing was built illegally on Palestinian Land, the demolition orders have been issued but never implemented. The state has declared its intentions to implement the orders but to no action has been taken so far.
Peace Now is used to this claim of awaiting on “plans”, as the Sate has used it in the past:
In the Haresha and Hayovel Petition in November 2005 the State claimed it was working on evacuation plans. Later on it was claimed that other “remapping” work was taking place to determine the exact lines of the settlements, and thus they required further extension until August 2006.
In March 2006 the government adopted the Talia Sasson report recommendations, over the illegal outposts, and even set up a team of ministers to formulate a “plan” to implement the reports recommendations – to date no plan has been completed.
Peace Now is submitted a request to the court asking it to abstain from granting any further continuations, to demand that the government implement its commitments in regard to Migron.
For the request (in Hebrew) click here.

In July 8 the State has requested a further extension. The State has claimed that since there is a new Minister of Defence, Ehud Barak, he will require time to formulate his position on this issue and he intends to hold a series of meetings on how to deal with the illegal outposts in the near future. Thus the State requested that they be granted an additional 90 days until they have to submit their official response.

In November 1st, The State submitted its response to the Supreme Court over the Peace Now petition regarding the removal of  the outposts of Migron.
The letter (in Hebrew) composed by the Defence Minister’s Bureau Chief, Michal Herzog, stated that the Defence Minster requests that the court issue another extension of  several months in order to give time for the talks between the Minister and the settlers regarding optional evacuation to be completed.
The Defence Minister has hinted that as part of the talks with the setters there might be an option of legalising some of the outposts in exchange for willing evacuation of others.

In January 23 2008, the government has informed the Court that: “The Prime Minister and Defense Minister have decided that the outpost Migron, which was constructed on Private Palestinian land, will be evacuated within six months, that is until the beginning of August 2008”. The announcement today hints that that the government is planning to move the outpost, to a new location, that would be “available legally, with appropriate infrastructure”. In addition the statement also expresses that the Defense Ministry reserves the right to “request from the Supreme Court an extension on this date, if it deems necessary”.
Peace Now responded that although the Prime Minister and the Defense Minister have finally realized that they cannot legalize outposts built on stolen Palestinian land, they have caved into the pressure from the settlers, following their threats of violence, and seem to agree to meet the demands of the settlers to rebuild them the outpost in another location. If indeed a new outpost will be built, instead of Migron, it will be a slap in the face for the peace process and severely damage the chance of Israel reaching an final agreement with the Palestinians.
For the full State’s response – click here, (in Arabic) – click here

On February 6th 2008, the Supreme Court accepted the promise of Prime Minister Olmert and the Minister of Defense Barak to evacuate the outpost, but ordered the State to report to the court on the implementation of the evacuation by August.

On August 13, 2008 the state declared (document in Hebrew) that the Yesha Council has agreed to decide within 30 days to which location to transfer the outpost of Migron.
Peace Now: The significance of this statement is that the state has shown its intention to evacuate and dismantle the outpost of Migron in its entirety. However the establishment of a new settlement is an impossibility politically. Thus this process of establishing a new settlement will most certainly take many years and with the political system as it is today it is clear to all that this evacuation will not take place in the near future.

On November 26, the Supreme Court has ordered the State to explain within 45 days why it shouldn’t remove the outpost. The order was issued following two years of foot dragging by the state, including promisses to the Supreme Court over upcoming evacuations, and the announcement on November 24 regarding an agreement signed with the settlers themselves to remove the outpost to the settlement of Adam.
Peace Now presented to the court a declaration by Brigadier General (ret) Ilan Paz, that estimated the construction of a new neighborhood in Adam to house the evacuees could take between 3-7 years.
In her summation the Supreme Court President Dorit Beinisch criticized the State “Today you are submitting papers full of promises, but without any knowledge of who will actually see this through in 3 years time, your statements have turned into meaningless words. In your statements you have revealed some of your secrets: you explain how the evacuation will be carried out, but you never actually say that it will be carried out”
Peace Now in response: The Minister of Defense attempts to cheat the Israeli public with promises that he has no intention of carrying out, we are delighted that the Supreme Court has seen through this ruse.

On February 2, 2009 the State responded (Hebrew) with the declaration that they intend to construct a brand new neighbourhood in an existing settlement for the evacuees of the Migron outpost.

On June 28, 2009  the State submitted an affidavit to the courts, according to which the Ministry of Defense authorized the construction of a brand new neighborhood in the existing settlements of Geva Binyamin (Adam). The construction would include 50 housing units for the evacuees of Migron and another 1,450 units for new settlers.

No Settlement has Been Evacuated since the Disengagement in 2005

Today, August 2, 2011, the Israeli Supreme court published its decision in Peace Now’s extensive Court Petition to dismantle the outpost of Migron (which in almost every means is a settlement. It has 60 housing structures and some 250 people).

Peace Now first petitioned the court over 5 years ago requesting the state stop the expansion of the outpost and immediately evacuate the settlers, in particular as the settlement was built on private Palestinian land.

The justice system declined from making any decisions in this time period, relying on goverment promises of upcoming evacuations and agreement with the settlers.

However the court’s patience ran thin last week when the state requested another extension, this one asking for an additional 16 months. The State presented a timeline, which lackeded any deadline, to construct alternative housing for the settlers, although the State noted the fact that the settlers had still not agreed to cooperate with the move. We intend to pressure the government to shelve the outrageous plan to construct private homes, without a tender, as a reward to the Migron settlers for vacating the land, all in a time of public crises over housing shortages.

This case proves that the Israeli Supreme Court is forced to be the one that upholds the rule of law in the West Bank. It is now up to the government to deal with the problem that it itself created and prove that Israel is a democracy and not an anarchy – and to respect and ratify the decision.

Peace Now calls upon the settlers to accept the decision of the courts gracefully and to begin to evacuate Migron. Although successive governments are willing to sacrifice the rule of law for political reasons – Peace Now is satisfied with this decision by the Court and is grateful that Israeli citizens can rely on the Supreme Court to be the savior of democracy and justice in Israel. 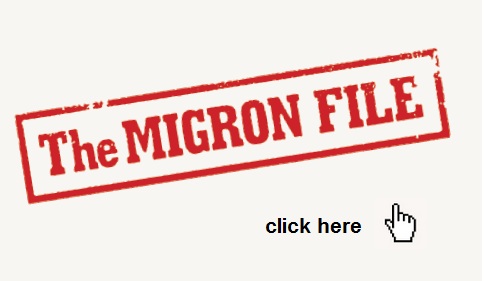