Of the 5,170 units, only 27% were west of the built Separation Barrier, while 29% were east of the barrier and 44% were between the current built barrier and the planned route of the barrier. Defense Minister Ya’alon had signed the approval to plan at least 1,507 housing units in settlements that are all east of the built barrier. However, the numbers are probably much higher, as the information regarding the Minister’s approvals is not public and we can only learn about it when the plans reach discussions by the planning committee.

Peace Now: “The new government speaks about two states, meanwhile on the ground they are doing exactly the opposite. While we are happy that the Israeli government has returned to negotiations, we are waiting to see if Netanyahu will walk the walk, and not just talk the talk. We call the government not approve any new plans and any new construction in settlements and truly give peace a chance.”

The following are the list of plans. (Note: No plan has been counted twice even if it progressed through two stages of planning). 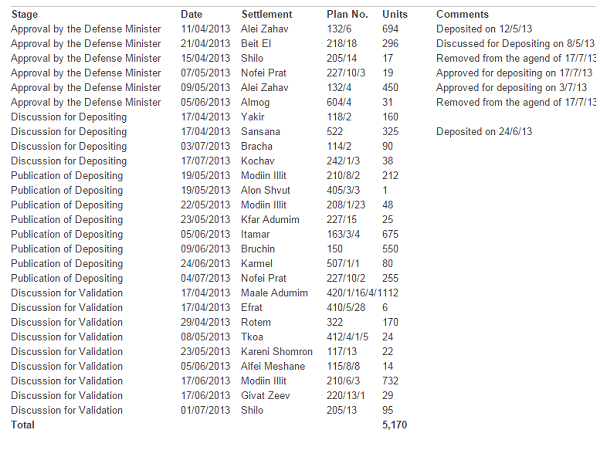