Yesterday, following a two-and-a-half-hour hearing on the appeal of the Sumarin family from Silwan, the Supreme Court ordered the State to submit its position on the legality of declaring the family home an “Absentee’s Property” within 45 days, after which the court will decide how to proceed with the appeal. During the hearing, the judges asked many questions to both parties, and according to the family’s lawyer, the impression was that the judges are trying to find a solution that will allow the family to stay at home.

The background to the discussion is an eviction lawsuit filed by the JNF (for the Elad settlers association) against the Sumarin family on the basis of abuse of the Absentees’ Properties Law. For more on the legal proceedings see here.

Peace Now: The court has given the government another chance to prevent the injustice by asking it a direct question about the use of the Absentees’ Properties Law. This is a discriminatory and draconian law and the government can and should announce that it should not be used to dispossess families of their property as was done to the Sumarin family. In the meantime, it seems that as in the case of Sheikh Jarrah, the Supreme Court is looking for ways to prevent the injustice even though the government is making efforts to allow it.

Dozens of activists demonstrated outside the court in support of the family and against the evacuation. 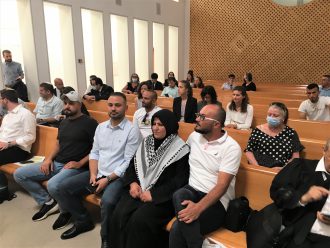 The Sumarin family members at the Supreme Court, 29/6/22

The discussion dealt with three main issues: A. The legality of the declaration of the house as an absentee’s property; B. Is it possible to change a final judgment that already rejected the JNF’s eviction claim in 1999; C. What is the validity of the permission given by the original landlord to the family to stay and live in his house.

Watch a summary by the family’s lawyer, Muhammed Dahleh, following the hearing.

A. The legality of the declaration of the house as an absentee’s property

The Sumarin family home was built in Silwan in the 1950s by Haj Musa Sumarin. In the years before his death, his nephew, Muhammad Sumarin and his family lived with him in the house, and he gave them permission to continue living in the house after his death. The eviction lawsuit was filed by the JNF against the nephew and his family, claiming that the house was not owned by them but owned by the JNF, which received the property from the Custodian for Absentee’s Properties.

As mentioned, the Sumarin House was declared an “absentee’s property” and was handed over to the JNF as part of the devious method developed by settlers, the JNF and government officials to take over Palestinian property in Silwan. The Custodian of Absentees’ Properties took ownership of the property based on an affidavit he received from sources related to Elad and the JNF, according to which the landlord, Musa Sumarin, was absent. It later turned out that Musa had never been absent and he died at his home in Silwan, but the Custodian of Absentee’s Properties decided to re-declare the property as absentee’s, this time because Musa’s sons are considered absent.

During yesterday’s Supreme Court hearing, Judge Barak Erez sought to understand how Musa’s sons were declared absent without checking whether they were his sole heirs, whether they were indeed absent and what their rights were in the property. This question is related to one of the claims of the Sumarins, that the Custodian of Absentee’s Properties could not have taken ownership of the property because Musa’s children, who are considered absentees, had not inherit from him the full rights in the property because Musa gave his nephew and family rights at the house before his death.

The State Representative argued at the hearing that the Custodian of Absentee’s Properties should not conduct an examination prior to a declaration, but rather that it is enough that he has administrative evidence before him. The judges ordered the state to submit a detailed opinion on the matter within 45 days.

The court decision effectively gives the government an opportunity to prevent the injustice created by the misuse of the Absentee’s Properties Law. It should be noted that immediately after the annexation of East Jerusalem in 1967, when the question of the applicability of the Absentee’s Properties Law in East Jerusalem arose, the government’s position was different. According to a decision from 1968 the policy of the government was that this law should NOT be used when the property is occupied, and that the law will be implemented only in cases where the properties are abandoned and no representative or relative of the owner is present to take care of the property. The Israeli government can today present a position to the court, even only on the concrete question of the Sumarin family, which opposes the injustice done in its name and with its assistance. Such a position could help the judges rule in favor of the family.

For more information on the government’s positions in the past regarding the Absentee’s Properties Law in Jerusalem, see annex II at the report: Annex and Dispossess.

Politically, to prevent eviction, it is much easier for the government to present a legal position in court that matches the positions of governments in the past, than to take drastic measures of expropriation and compensation.

B. Is it possible to change a final judgment that already rejected the eviction claim against the family in 1999?

The JNF’s first eviction claim was filed in 1991. After various incarnations, the court rejected the claim and ruled that although the ownership is of the JNF, the family has rights in the property by virtue of permission given by Haj Musa to the nephew’s family, and dismissed the eviction claim. The verdict became final after the appeals against it were rejected.

The Sumarin family then filed a lawsuit in the district court in an attempt to register the house in its name. This lawsuit was rejected in 2003.

In 2005, the JNF filed a new eviction suit. After years of delays and hearings, the Magistrate’s Court ruled that the family had no right to the property, and that it should vacate it. The district court upheld the decision, and now the issue is being discussed at the Supreme Court.

One of the legal rules is that a final judgment on a particular issue cannot be changed. According to the Sumarin family, the eviction claim was rejected as early as 1999 and there was no reason to allow the JNF to reopen the question and file another eviction claim because the matter had already been decided on the question of evacuation.

The judges of the court asked the two parties various questions in this matter in order to refine the arguments of the parties.

C. What is the validity of the permission given by the original landlord to the family to stay and live in his house.

Another major issue that came up in the discussion is the permission that Haj Musa gave his nephew to continue living in the house even after his death. According to the JNF, such permission was valid only for the nephew himself, and now that he too has died, it is not inherited by his wife and children. They also argued that this permission could be revoked.

In this matter, a detailed discussion took place related to legal questions of the rights granted by the permission.

In the end, it is important to remember even without going into all the legal questions that this is a political matter rather than a legal one. The Israeli government has a responsibility to prevent injustice and it can and should intervene and do so. The easiest way to do this is in the legal reply that will be submitted in 45 days. Another way, more difficult politically but completely possible and legally and morally practical is through expropriation and compensation.

🚨 HAPPENING NOW
Protest outside the Israeli Supreme Court in #SumreenSolidarity as the Sumreen family’s hearing is set to begin shortly. pic.twitter.com/LO1mw4jJhP

Activists outside the Supreme Court in support of the Sumarin family, 29/6/22