On March 17, Nir Hasson exposed in Haaretz that the Jerusalem municipality seeks to reactivate demolition orders in Palestinian area in the Bustan neighborhood in Silwan. In that, the municipality headed by Moshe Leon backed from an agreement that had been reached after his predecessor, Nir Barkat, requested to demolish the houses in the neighborhood in order to create a tourist park planned by settlers. When the fear of displacement hangs over hundreds of families in Sheikh Jarrah and Silwan following settlers’ claims – the municipality is giving its support to those who demand eviction and helps them with budgets and plans.

This policy, which has been taken by the municipality against its own residents, had characterized all Mayors of Jerusalem- almost entirely. The Legendary Mayor Teddy Kollek, who was Mayor of Jerusalem between 1965-1993, was the architect of the ‘unification’ of Jerusalem but at the same time kept a public image of someone who cares about the Palestinian residents. When in October 1991, for the first time the settlers of Elad (a Settler association) entered Palestinian homes in Silwan, in a rare move, Kollek went, alone, to demonstrate the settlement in Silwan. Recently, research led by Peace Now has shown, that not only did the settlers’ provocation had angered him, but the wrong committed against those Palestinian families in Silwan concerned him deeply.

In 1992 Yitzhak Rabin’s government founded the Klugman Committee in order to investigate the governmental involvement in taking over Palestinian homes in East Jerusalem. The committee had found that then Minister Ariel Sharon had led an apparatus of governmental organizations (Custodian of Absentees’ Properties department, Israel Land Administration, Ministry of Construction and Housing, the JNF/KKL and others) which worked to take control of Palestinian properties and transfer them to associations of settlers funded by the state. Rabin’s government stopped the actions of this apparatus but didn’t dismantle it or undo its prior actions. Thus, the Palestinians who had been abused by this apparatus had to deal with it themselves, in courts, alone, opposite powerful bodies such as JNF and settlers organizations.

Teddy Kollek couldn’t bear that. He approached many position holders, including some who could not help him, and tried to convince them to allow those Palestinian families to keep residing in their homes. This is what he wrote, for instance, on 4.2.1993, to the Minister of Justice: 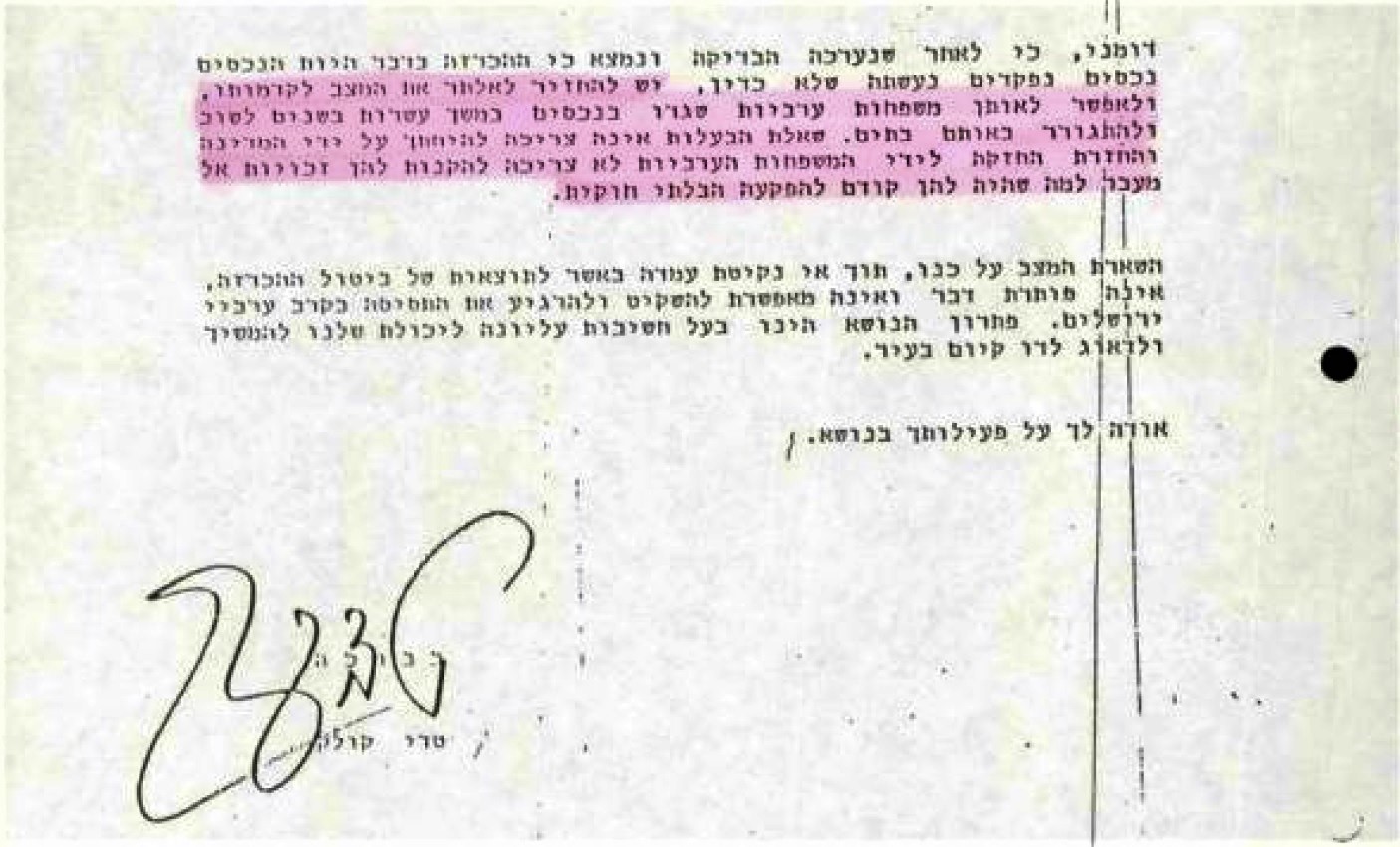 On the 9 March 1993 Kollek wrote to State Comptroller of Israel, Miriam ben Porat:

“even if it is clear to me that this matter is not the responsibility of the State Comptroller, following an investigation that found that the declaration of absentee property was unlawfully conducted – it must be restored to its former state. It is of great importance to correct the injustice done to some of the Arab residents of the city, and as far as they are concerned, justice must be seen and not merely done – even if through a long, tedious, legally complex process.”

On the 14 March 1993 Kolek approached Foreign Minister Shimon Peres and asked that the properties returned to the Palestinians. In his letter he briefly described the findings of the Klugman Report and stressed:

“all this did not yet return one property to the Arab residents who lived in these properties in the past. It is our duty to show that justice is done and not only discussed in the courts. This matter will clearly greatly ease relations in the city, yet may peripherally impact more significant negotiations. I shall call you tomorrow to hear which steps you can take in this issue”.

On April 30, 1993, two days after the Minister of Energy Amnon Rubinstein visited Jerusalem, Kollek wrote to him:

“I request your intervention in the government to rectify the injustice, through returning assets to their legal owners … I believe that even if the Arab owners of the properties cannot prove their ownership, at least the situation should be restored.”

Those are only the letters that had reached us. We do not know if Kollek made other efforts, but it is obvious this was a burning issue for him. His efforts, unfortunately, did not succeed.

On April 5, the Supreme Court discussed the appeal of the Sumarin Family from Silwan, whose home has been declared ‘absentee property’ in 1987 and given to the JNF. The JNF is calling to evict the family for the sake of the Elad Settler organization, in a 30 years long legal battle. In a rare move, the court asked the State’s Attorney to give his opinion on the issue, signaling that the government has some responsibility on the matter. Unfortunately, today there is no Mayor to stand by the Sumarin. In 2021 Jerusalem, hundreds of families are in grave danger of expulsion, on the basis of discriminatory laws and a cruel policy, and not one body in the Municipality and Government Offices is standing by them to stop this injustice.