At a press conference held in Tel Aviv today (2/8/10), Peace Now has launched a new campaign calling on the government not to renew construction in the settlements at the end of the 10 month freeze that was declared in November 2009. In addition, Peace Now also released an eight month assessment of the implementation of the freeze. The findings underscore the notion that unless the settlement moratorium is extended – with no new “exceptions” or loopholes – and unless it is enforced – this 10-month moratorium will have been meaningless.

This means that on the ground, there is almost no freeze or even a visible slowdown, despite the fact that legal construction starts have been frozen for 8 months.  It also means that the Government of Israel is not enforcing the moratorium.

A. New Construction:  At least 600 new housing units have started to be built during the moratorium, in at least 390 new structures – 223 permanent structures and 167 caravans or semi-permanent structures.
The approved exceptions: On the eve of the freeze, the Israeli government approved some 492 housing units to be started during the freeze (and an additional 112 units that were granted during the freeze in Beitar Illit). Only 141 of those exceptions have begun to be built and therefore according to Peace Now’s count, at least 462 new housing units have been built illegally in violation of the freeze. Within these 462 units, 31 caravans and 7 permanent structures have been built in outposts and not only do they violate the settlement freeze but they violate the Laws of Planning and Construction.
It should be noted, that for the most part the violations of the settlement freeze have been fairly small scale, with buildings being built here and there in various settlements; however there are large construction projects in several settlements including dozens of housing units that affect the bigger picture. For example, within the 603 new housing units 180 units (30%) have been built in Modiin Ilit alone and another 40 in Givat Ze’ev.
There are several construction projects that had begun to prepare their infrastructure but were stopped because of the settlement freeze. These include a project for 62 new housing units in the settlement of Barkan, approx. 100 new units in Neriya, and 60 units in Shaarei Tikvah. 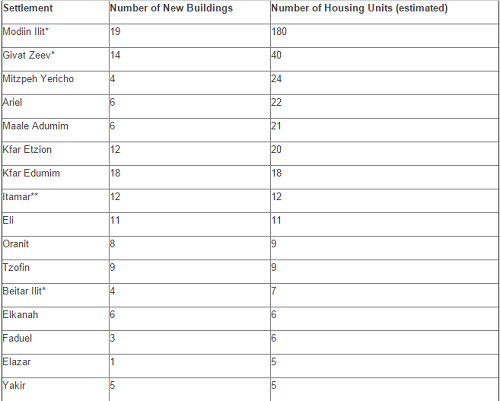 For the full list of violations and construction in every settlement

B. How Significant is the Freeze? What Would it Look Like Without the Freeze?
Over the course of the last decade, on average 1,700 new housing units were built each year in the settlements (according to the data from the Central Bureau of Statistics that does not include illegal construction). In eight months, this would mean that an average of 1,133 new housing units would have been built. Peace Now estimations that only 603 new units have been built shows a significant decrease in the number of units being built; almost half of the annual total. However according to the declared freeze, there should have been no new construction starts whatsoever.

C. Ongoing Construction: The settlement freeze did not include construction that began before the freeze took effect. At least 693 structures continued to be built during the freeze (in addition to the 390 that were started during the freeze) within them some 2,000 housing units. Only if the freeze continues will it have a meaningful effect on the ground.  Restarting construction will render the 10 month freeze insignificant. It will become a meaningless, several month delay on some construction projects.

Conclusion
Peace Now strongly believes that for Israel’s own best interests the moratorium must be extended, regardless of what is happening, or not happening, with regards to Israeli-Palestinian peace talks.
We believe that it must be extended with no more game-playing.  This means extending it without adding any new exceptions or loopholes, and it means real enforcement to stop settlers who break the law by violating the moratorium.
Otherwise, the entire debate over whether or not to impose the moratorium or whether or not to extend it is little more than an empty words.