In November 2008 the Amana organization, the private construction and development body for the settlements, together with the local council of Binyamin, began to construct a neighborhood of new private housing units in the Halmish settlement north of Ramallah.

This construction is taking place without any valid planning permission or authorization.

Upon discovering the construction Peace Now immediately turned to the head of the Civil Administration requesting that he acted with his full authority and halt the construction, he did not respond to the request.

The construction continued at a startling rate, within 3 months the inner structures of the houses were already completed, and again Peace Now appealed to the Civil Administration to order an end to the construction – again no response was forthcoming.

In April 2009 the houses were almost completed and the final appeal by Peace Now was ignored once again by the authorities.

In order to prevent a public outcry over such construction, the new tactic is to build illegally, without official overt government authorization and without valid planning permission.

This is an attempt by the government to avoid its responsibility and avert public criticism.

Peace Now decided to appeal the Supreme Court requesting that it forces the government to uphold the law and to stop this illegal construction taking place in Halmish.

We believe that if the government is interested in developing isolated settlements and construction in neighborhoods like Halmish, they should do so openly through official decisions, and publish detailed plans – and in return to pay the price politically and internationally.

The policy of turning a blind eye to the acts taking place in the West Bank is a dangerous and invalid policy.

Since all of our requests for action were blatantly ignored, Peace Now has chose as a last resort to turn to the courts of Israel so that the law of the land can be upheld.

On May 31, the court issued orders to stop the construction work immediatly.

Aerial photo of the settlement of Halamish 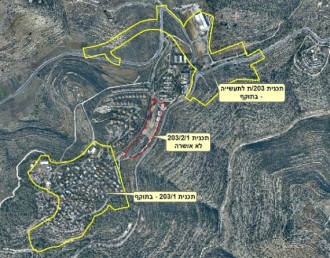 Construction plans of the settlement of Halamish