On August 9th 2005, the Sharon cabinet endorsed resolution No. 4090 to “Prioritize: Bolstering the City of Jerusalem”.

“According to this resolution, the government of Israel would allocate 50 million NIS per year (from 2006-2013) for the development of the Old City Basin and the Mount of Olives.
A further 10 million NIS would be allocated from the Ministry of Tourism’s budget.
Thus this resolution would receive an overall investment of 480 million NIS.”

This government resolution planned to dramatically change the political and religious status quo in East Jerusalem, in effect deepening the Jewish hold over the Palestinian neighborhoods around the Old City. If the implementation of this plan continues, it might turn the issue of Jerusalem, and specifically the Old City basin, into a non-solvable issue, possibly preventing the ability to reach a two state solution. Moreover, today’s actions in East Jerusalem have a direct affect over the Palestinian population living in the city, exacerbating the tension and friction between Muslims and Jews.

Read more about tourism as a settlement in Jerusalem – click here.

A. The Main Points of the Plan

The information and quotes below are based on 2008 budget document of the plan and the project update booklets authored by the Jerusalem Development Authority (in January and August 2008).

“The goal of this project is to create a sequence of gardens that will adorn the Old City.”  The plans map covers all the open spaces around the Old City, running through the Palestinian neighborhoods of Silwan, Ras el-Amud, Wadi Joz, Al-Swana, Sheikh Jarrah, A-Tur, and more. 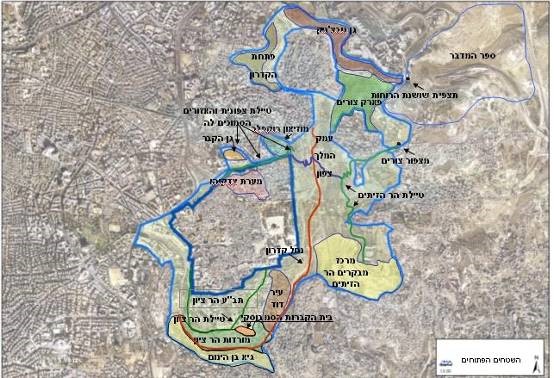 The Map of Open Areas in the Government Plan

The Mount Scopus Slopes – NIS 7 million; a plan for the construction of a national park on the eastern slopes of Mount Scopus.

Tzurim Valley – NIS 1 million (in addition to NIS 6 million invested there in the past, probably by the Jerusalem Municipality and the Ministry of Tourism) – a declared national park since the 1990s. The Archaeological Experience site for filtering Temple Mount rubble operates on the park under the management of the National Parks Authority (NPA) and the Elad Association. Tens of thousands youths and soldiers visit it annually.  Also planned there: an NPA visitors center and a restaurant.

The Kidron Salient – NIS 4 million.  This site is located between the National Police HQ and the Tzurim Valley, down from Wadi Joz and Sheikh Jarrah.  The idea is to build a Biblical park on undeveloped plots in the area recreating the pilgrimage to Jerusalem.  Currently, the plan is under feasibility examination.

Kings Valley – North – NIS 10 million.  The continuation of Tzurim Valley South toward the Kidron Wadi; the area has been planned and fenced in, and gardening works were carried out.

Kings Valley – Center – NIS 2 million.  Between the Ofel and the Jericho Roads, down the wadi from Gethsemane.  The garden here is fully planned and ready for execution, but the Franciscan Church that owns the land refuses to open it for the public.

Kings Valley – South – NIS 7 million.  A path between the Mount of Olives and the Pool of Silwam runs along the Monuments Axis in the Kidron wadi.  There are plans to build a promenade, gardening, and lighting.

The Sambuski Cemetery – NIS 3.5 million for a plan to rebuild the old Jewish cemetery on the slopes of Mount Zion.

2. The Mount of Olives Project

This is a plan for the renovation, maintenance, and security of the Jewish cemetery on the Mount of Olives, located among Palestinian neighborhoods.

Security – NIS 16 million (+ NIS 2 million in donations).  A comprehensive plan for security on and around the mount.  Security there will cost another NIS 3 million annually.

Renovating the cemetery – NIS 35 million for rebuilding graves and tombstones.

Placing signposts on the Mount of Olives and the open spaces – NIS 2 million.  The signposting project is meant to offer orientation on site and a tour of all its parts, “to make the visitors sense the mountains might.”

Information and documentation center on the Mount of Olives – NIS 15 million. Mapping all the graves and establishing a GIS computerized system and an Internet site.  Also planned is the construction of a structure that will serve as visitors and information center for the cemetery.  JNF-Canada will donate $10 million for this purpose.  It should be noted that the Elad Association has already established a temporary visitors center on the mount (probably without permits) and coordinates the mapping project and the computerized system.

Mount of Olives, Tourism – This project includes annual events, building an Internet site, and raising awareness of the Mount of Olives.  The organizers testify that the number of visitors there has tripled.  It is further worth noting that the Elad Association has recently launched the Internet site for this project.

The plan also includes investment of c. NIS 150 Million in different projects in the Old City, and another NIS 328 Million for tourism development throughout the region.

B. The Implications of the Government Plan

The completion of the Israeli plan will change dramatically the map of East Jerusalem and might prevent a permanent status agreement and a compromise in Jerusalem. The following examples demonstrate the ideology behind the government plan:

The Mount Scopus slopes- Although the eastern slopes of Mount Scopus are not part of the Holy Basin or the region seen from the Old City, the planners wish to declare the area east of Mount Scopus (between the Palestinian neighborhoods of Isawiya and A-Tur) a national park, so to divide the two neighborhoods and prevent potential Palestinian territorial contiguity in East Jerusalem.
The establishment of the park will also create a territorial contiguity in favor of the E1 plan and the Maale Adumim settlement, (a plan that puts an end to the Palestinian contiguity between the northern and southern parts of the West Bank). 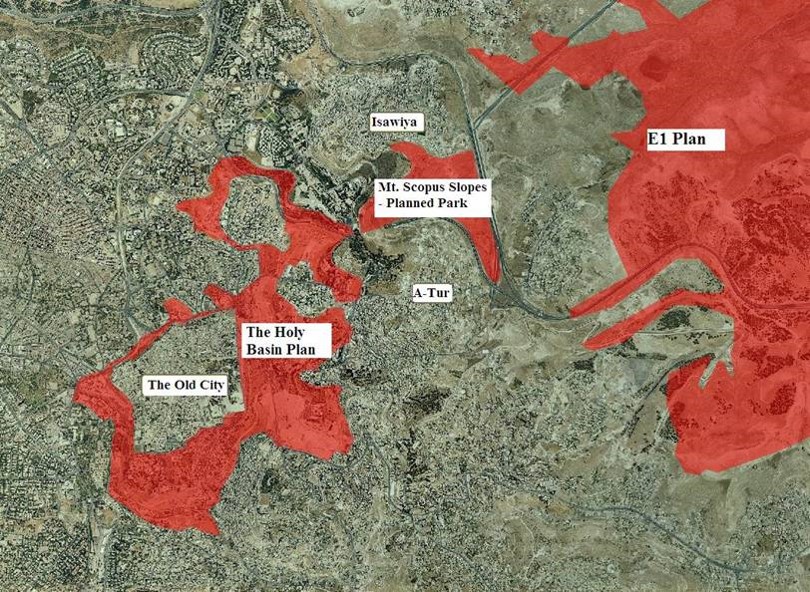 The National Parks and the connection to the E1 plan

1. Completing a settler project, creating Israeli dominance over compounds in Palestinian neighborhoods – Almost every part of the plan includes settlements. For example:in the Mount of Olives, the plan is to build a visitor center and make the compound a place of pilgrimage for Jewish tourists. The implementation of the plan will also unite the settlements that were established in recent years near the Mount of Olives (in Ras el-Amud and in A-Tur).
In the Palestinian neighborhood of Sheikh Jarrah the settlers established in recent years several settlement-compounds. The government plan is to create a Biblical park on all of the open spaces left undeveloped in the neighborhood, thus completing the Jewish dominance in and around the neighborhood. 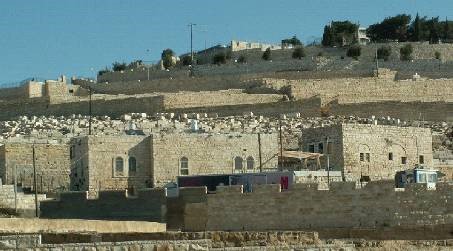 Settlers Houses in the Mt. of Olives Cemetery

2. The involvement of settler’s associations in the plan – the implementation of the government plan includes subcontractors such as the Elad association. The Elad association is working in recent years, together with other bodies, on deepening the Jewish presence and dominance at the heart of Palestinian neighborhoods in East Jerusalem by tourism projects, archaeology, research and settlement in order to prevent a future compromise and agreement in Jerusalem. Adi Mintz, a board member of the Elad association was quoted in Haaretz daily as saying: “Our goal is to hold on to outposts in East Jerusalem and create an irreversible situation in the sacred basin around the Old City“.

The government of Israel is investing tens of millions of shekels per year for projects in East Jerusalem, so to strengthen the Jewish hold over the city and to change the current delicate status quo.

The plan is being implemented with the help of ideological right wing associations, and plans to create a contiguity of Jewish settlements in Palestinian neighborhoods in East Jerusalem.

All of the planning is made unilaterally without the participation and knowledge of the non-Jewish residence of East Jerusalem. They are faced with facts on the ground without a real possibility to object or to present alternative development plans of their own.

The implementation of the plan will change dramatically the map of Jerusalem, will escalate the tensions between Jews and Muslims and will prevent the possibility of a two states solution based on a compromise in Jerusalem.

Read more about the tourism as a settlement in East Jerusalem – Click Here.