In October 2016 the the Israeli Government Tourism Company published a tender of half a million shekels for a tourism project on private Palestinian land near Ramallah.

The aim of the project, which was prepared in cooperation with the Beit El local council, is to establish an scenic promenade in an antiquity site called “Jacob’s Dream,” or Sheikh Abdullah’s Tomb. The site is located north east of the Beit El settlement, approximately 500 meters from the Ulphanah neighborhood, which had been built on private Palestinian lands and was partly evacuated after a High Court ruling in 2012. In September 2014 a viewpoint was destroyed in the nearby area, following a threat to petition the High Court of Justice, submitted by Palestinian landowners alongside Yesh Din.

On 8 October 2016, Walla News exposed the cost of the tender, totalling 471,640 shekels. The report included a confirmation from the Beit El local council head, that the council is the one behind the project. According to the report, the project was approved by the Ministry of Tourism as well as by the Ministry of Finance, based on the procedure of developing public touristic infrastructure in 2013.

Following this exposure Peace Now submitted a complaint to the Attorney General, demanding the opening of an investigation against those responsible for issuing the illegal tender and approving its budget. Peace Now also demanded from the legal advisor of the Ministry of Tourism to cancel the tender immediately. Yesterday, 9 May 2017, the legal advisor of the Ministry of Tourism announced that “after examining and investigating the matter I instructed the cancellation of the tender for implementing works on the scenic promenade in the site of ‘Jacob’s dream’ in Beit El.”

Peace Now: “It is appalling that an official governmental authority initiates and funds a project which steals land from its legal owners. The fact that the head of the Beit El council freely admits the council is the one behind the illegal project illustrates the state of lawlessness which exists when it comes to settlement developments. Without investigations or prosecutions of those responsible for continuous land theft in the West Bank, the Israeli government cannot free itself from responsibility towards these illegal actions. 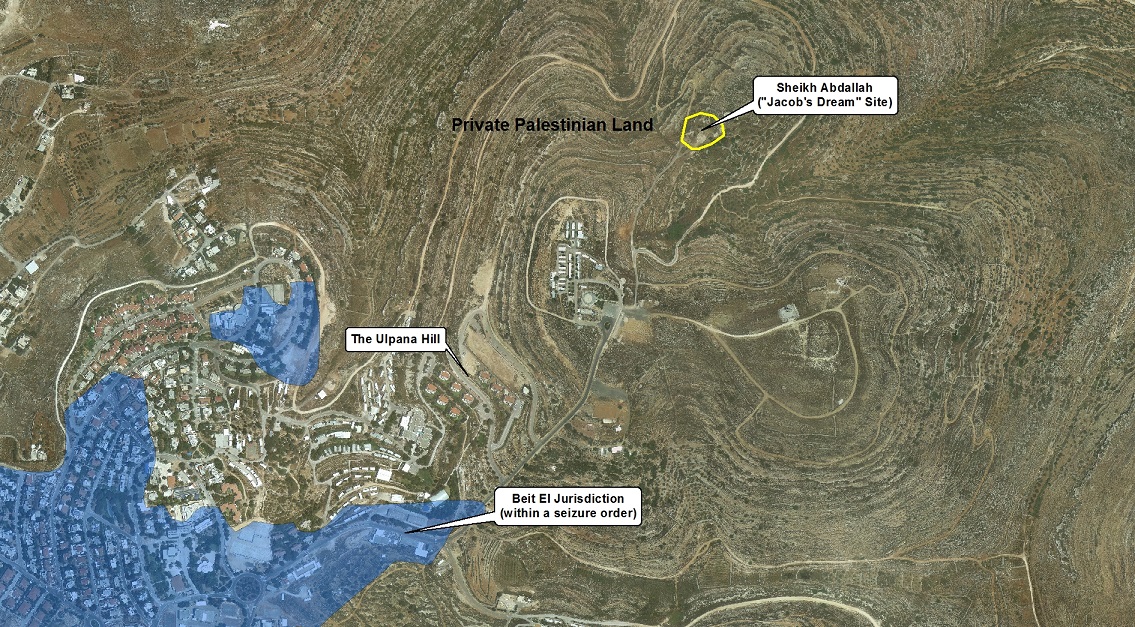 The Location of “Jacob’s Dearm” Site