In this petition Peace Now has requested the immediate implementation of the demolition orders issued against 6 outposts in the west Bank. This petition follows up on a commitment to demolish the outposts in question, by the Defense Ministry, which they made in a previous Peace Now petition on this matter (Hebrew).
The demolition orders were issued though never implemented
Over 3 years ago the Commander of the Central Command issued delimitation injunctions against six unauthorized outposts (A delimitation injunction is an administrative measure which sets in motion the legal procedure for evacuating an illegal settlement). After a year and a half of inaction Peace Now appealed the courts in a request that the evacuation of these outposts be implemented as per the Central Command’s orders. Under pressure from the Supreme Court the previous Defense Minister extended the delimitation orders, and on 6/6/06 the courts accepted the Defense Minister’s promise of upcoming action and rejected the movement’s petition. However the justices did add that should the outposts not be removed within a reasonable amount of time, Peace Now should re-appeal the courts on this matter.
Until today no changes have been made regarding these outposts, and despite the Central Command’s orders the outposts continue to flourish with permanent structures being built, caravans added, families arriving and roads being paved.
The renewed demolition orders will expire at May 2008, and the Supreme Court hearing is set for April 10th.
The reference is to the following outposts:
Mitzpe Lachish
Giv’at Asaf – T Junction
Ramat Gil’ad – Giv’at Hadegel
Ma’ale Rehav’am
Mitzpeh Yitzhar – N.G. 693 (Giv’at Yitzhar)
Haro’e – Eli 762
We should like to append what Ms. Talia Sasson, Adv. wrote with regards to the non-implementation of the delimitation injunctions, as follows:
“A striking example of the lack of enforcement which originates at the political level is the non-implementation of the delimitation injunctions.  This issue is particularly serious in view of the fact that the reference is not to a lack of enforcement by virtue of omission but to the putting a halt to the enforcement process after it has been confirmed by the Supreme Court.  Thus a clear message is being sent to the settlers, to the soldiers, to the police and to the general public, that there are no real intentions to evacuate the settlers from illegal outposts.  This is because the political level sends out double messages.  Declarations made in the Supreme Court are empty of content since they do not result in actions, even when there are no legal grounds for delay …these proceedings transmit a negative message regarding all aspects of law enforcement as it relates to the unauthorized outposts.”
And elsewhere, she wrote:
“The phenomenon of unauthorized outposts has been taking place before our eyes for several long years, thereby perpetrating serious and ongoing violations of the law.  Law enforcement elements, government authorities and the political stratum of Israel have been aware of these actions for a number of years.  All this time, the authorities took no determined steps to enforce the law in order to put a stop to these acts.  On the contrary, as is shown in this report, various state authorities did their best to support this phenomenon, to finance and encourage it, all without legal authority and in fact, in violation of the law.  This is the double message which has been sent by the political level to the military level and government authorities for years regarding unauthorized outposts.  Justification for not implementing the delimitation injunctions which were issued and approved by the Supreme Court, the complexity of actually implementing and applying the delimitation injunctions, cannot last for long.  The more time that passes after the confirmation of the delimitation injunction by the Supreme Court without its being implemented, the more persons will receive the impression that there are no real intentions to evacuate those outposts, and there is concern that this is but another link in the double message syndrome.” 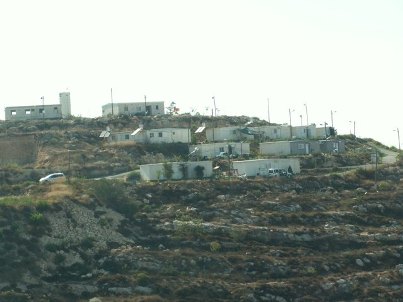 To see the petition (in Hebrew) – click here
On April 1st the state submitted its response. In the response they claimed that the Defense Ministry has every intention of extending the Delimitation Injunctions for another year.In the course of this year the state intends to continue in its “negotiations” with the settlers in order of to come to some evacuation agreement.
On March 2009 the court set a date for the next hearing: 12 October 2009. Peace Now asked to set the hearing for an earlier date (Hebrew).
On May 13 2009, the court ordered the state to explain within 90 days, why it shouldn’t remove the outposts, and also to update the court regarding the talks with the settlers that was promised by the State.
On December 2nd, the state asked for another extension, this time under the excuse of the Settlements Freeze that was declared and that is taking all the attraction and efforts of the Ministry of Defense in the settlements issue.
Despite Peace Now’s objection to another extension – the court granted the state with another 3 months, till February 15th, 2010.
On October 19, 2010 State announced that Evacuating Illegal Outposts is a Policy Issue.
The main points of the prosecution’s filing to the High Court state that:
“The issue of construction in the West Bank in all its forms has become a core issue of political dialogue between Israel and the Palestinian Authority, and a strong point in political relations with the United States and other friendly countries. Therefore, the government’s policy actions that change the situation on the ground, are examined while taking into account broad national interests and the big picture which also includes political considerations, security considerations and others.”
For this reason, the state is requesting “additional time to examine the circumstances that influence the formulation of policy priorities [evacuation]”
On March 7, 2011, the State announced that outposts on private lands will be removed, while those on “State Land”, will be examined for ligalization. The announcement included a promise to remove the outposts on private lands that are in this petition by the end of this year. Read here more about the meaning of this anouncement here.
To see the state’s announcement (English) – click here
On November 10, 2011, the State updated the court that it will evict Mizpeh Yizhar and Ramat Gilad by the end of year 2011, but it will postpone the eviction of Givat Assaf to July 1st 2012. The Court have not yet approved or rejected the State’s announcement. To read the announcement (in Hebrew) – see here.