The Higher Planning Committee of the Civil Administration approved today (30/5/18) 29 construction plans in the settlements, consisting of 1,958  housing units. Most of the plans are east of the potential border route of the Geneva Initiative, in isolated settlements which Israel will likely have to evacuate within the framework of a two-state agreement.

696 housing units received final approval (approval for validation), while 1,262 housing units were approved for deposit (the first approval in the planning process) following which the plans are expected to be published for public review. (For more on planning in the West Bank, see here)

It should be noted that in the defense minister’s announcement last week he claimed that in addition to the 1,400 housing units approved for preliminary approval, another 2,500 will be brought for final approval. This corresponds to the fact that, apart from the units that will be approved for validation, tenders for the construction of several hundred housing units were also published. On 31 May, tenders consisting of 1,162 housing units were approved: Ma’ale Adumim – 459 ; Ariel –409; Elkana – 250 ; and Ma’ale Ephraim – 44.

It should also be noted that tenders are published by the Ministry of Housing after plans are fully approved, and are not discussed in the Higher Planning Committee.

2.     The establishment of two new settlements (Zayit Ra’anan and Brosh)

Brosh – In 2013, several young people entered a deserted vacation village in the northern Jordan Valley and established a new outpost, where only a handful of settlers live. In order to conceal the intention to build a new settlement, the construction plan is called “Brosh Educational Institution,” but the goals of the plan indicate that residential, tourist, gas station and other facilities are planned alongside public institutions and buildings. The committee did not mention the number of planned housing units in the new settlement.

It should be noted that since Netanyahu was elected in 2009, 17 illegal outposts have been established. Out of around 100 illegal outposts, 11 outposts have been retroactively legalized, and 35 are in various stages of becoming legalized. Two of these in the latter category are Brosh and Zayit Ra’anan. For more details on the method of outposts and the establishment of new settlements in the era of Netanyahu, see here.

Zayit Ra’anan – The Higher Planning Committee approved for deposit plan No. 235/7/1 for the establishment of 189 housing units in the illegal outpost of Zayit Ra’anan (west of Ramallah). The outpost was established illegally in 2001 and has 40 families. If it passes through the rest of the planning process, this plan will not only retroactively legalize current illegal structures, but will allow the construction of additional permanent homes and the establishment of a new settlement. 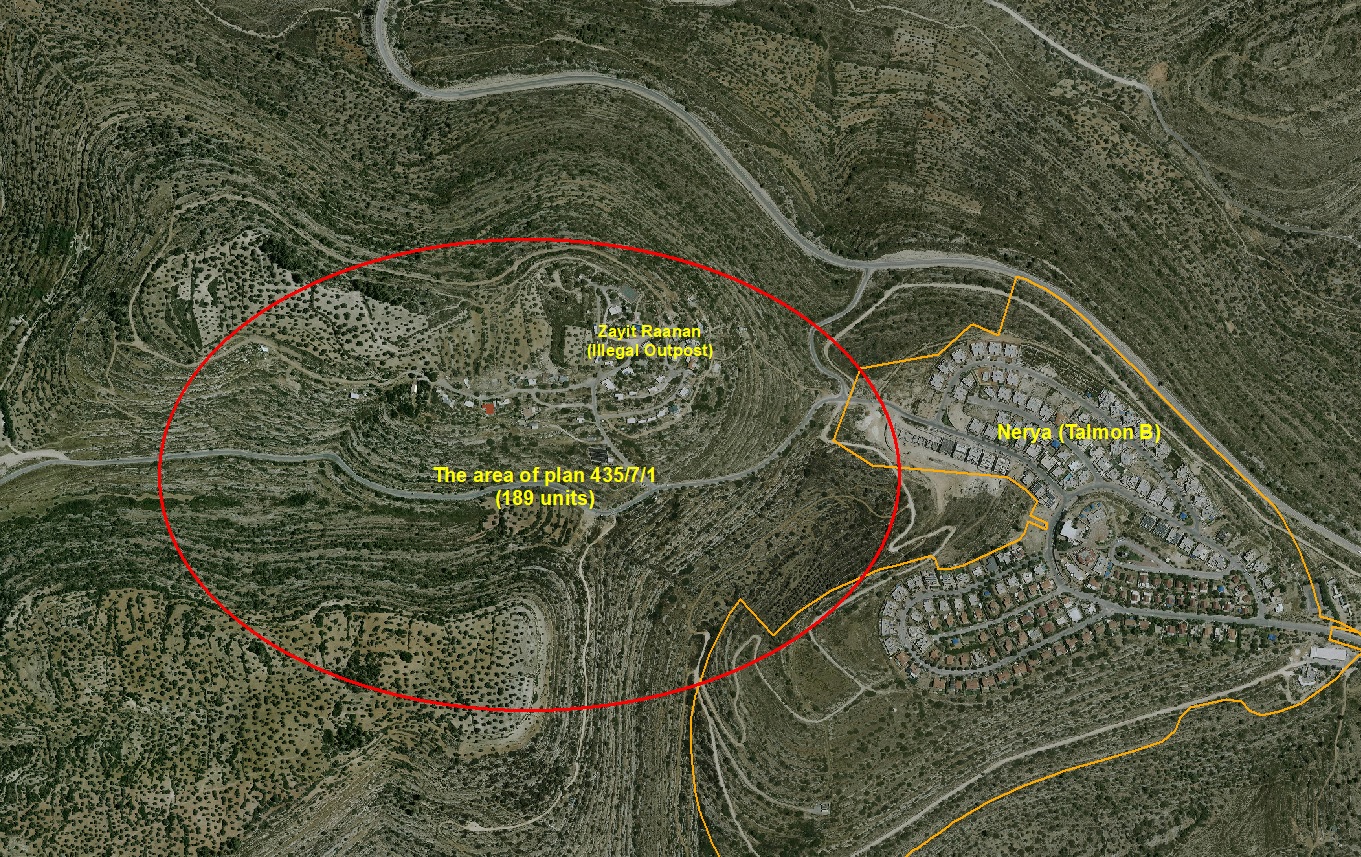 3.     Most of the plans are outside the “built-up area” of the settlement

It is important to emphasize that the damage done by the settlements to the chances of peace in the context of a two-state solution, as well as the lives of the Palestinians, does not depend on the amount of land occupied by the settlements. It is precisely the number of settlers in the settlements that is crucial, since ultimately Israel’s biggest challenge in a two-state agreement is the evacuation of tens of thousands of people; less important is how many dunams will be evacuated.

An examination of the plans submitted for approval on Wednesday reveals that at least 1,500 housing units are clearly outside the “built-up area” (the “footprint”) of the settlement.

4.     Plan for the expansion of a settlement near the Palestinian Bedouin village Khan al-Ahmar, slated for demolition

Peace Now: The approval of the plan is the embodiment of exploitation and evil. The government stubbornly refuses to grant building permits to 32 Palestinian families living on about 40 dunams in the area and intends to evict them, but at the same time approves construction on large areas for hundreds of Israeli families. If there is anything that blackens Israel’s image in this world, it is the cruelty and discrimination that reeks to the heavens in this case. Neither is there any real Israeli national interest behind the destruction of the village. 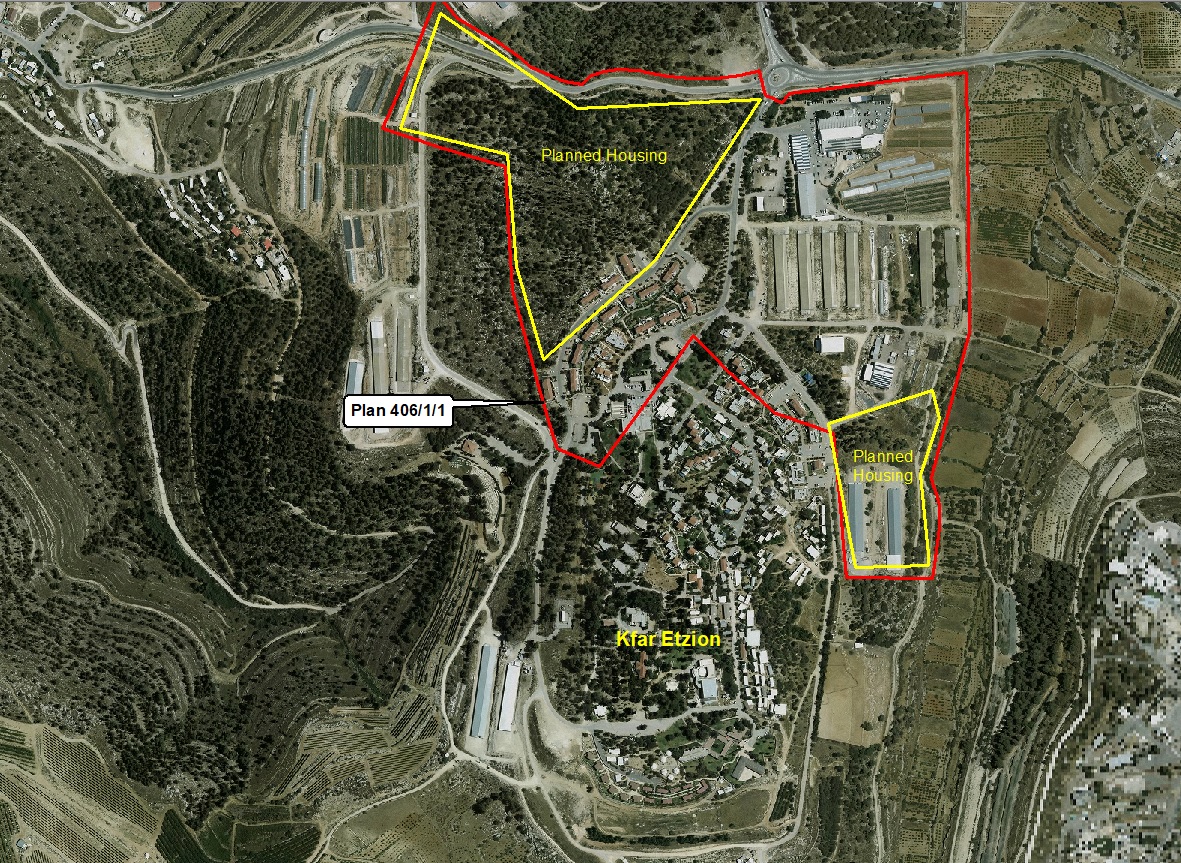 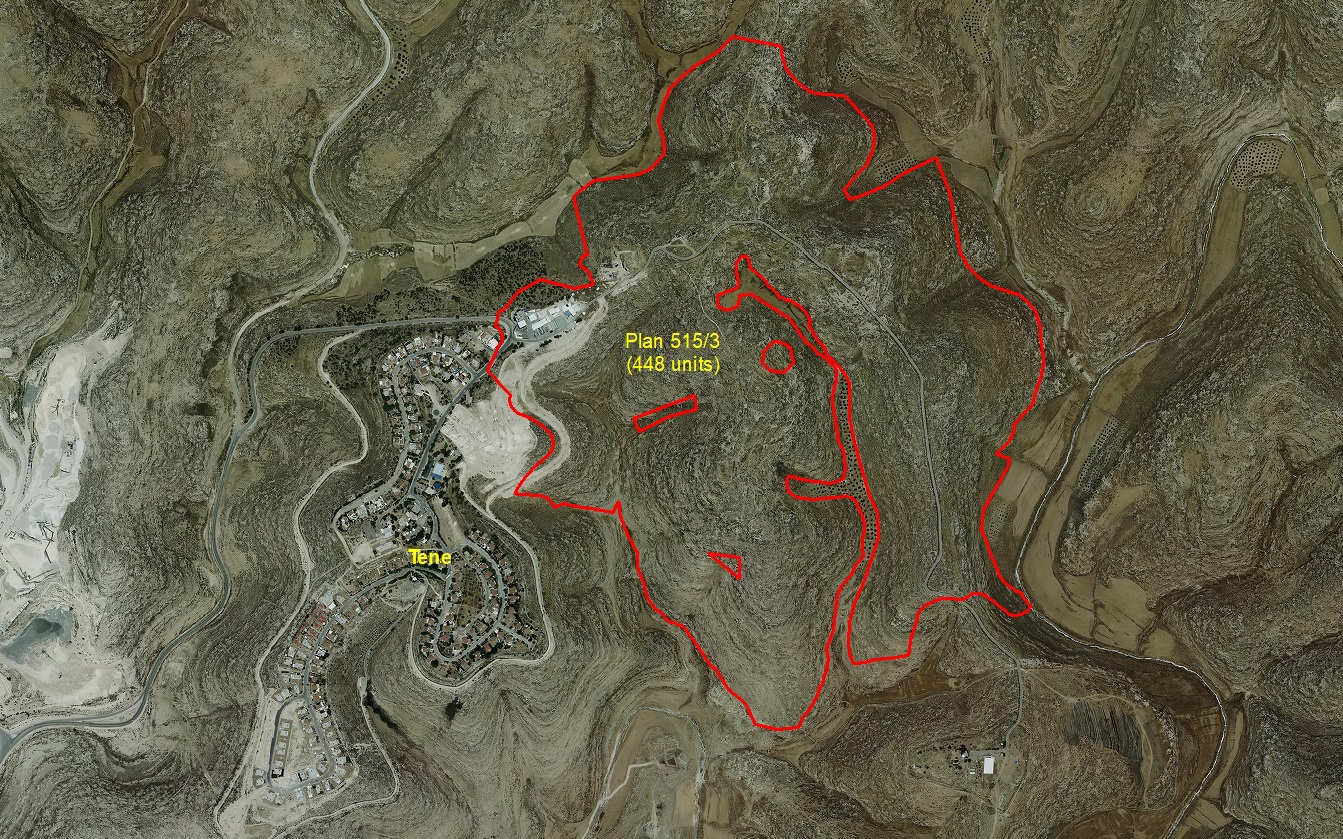 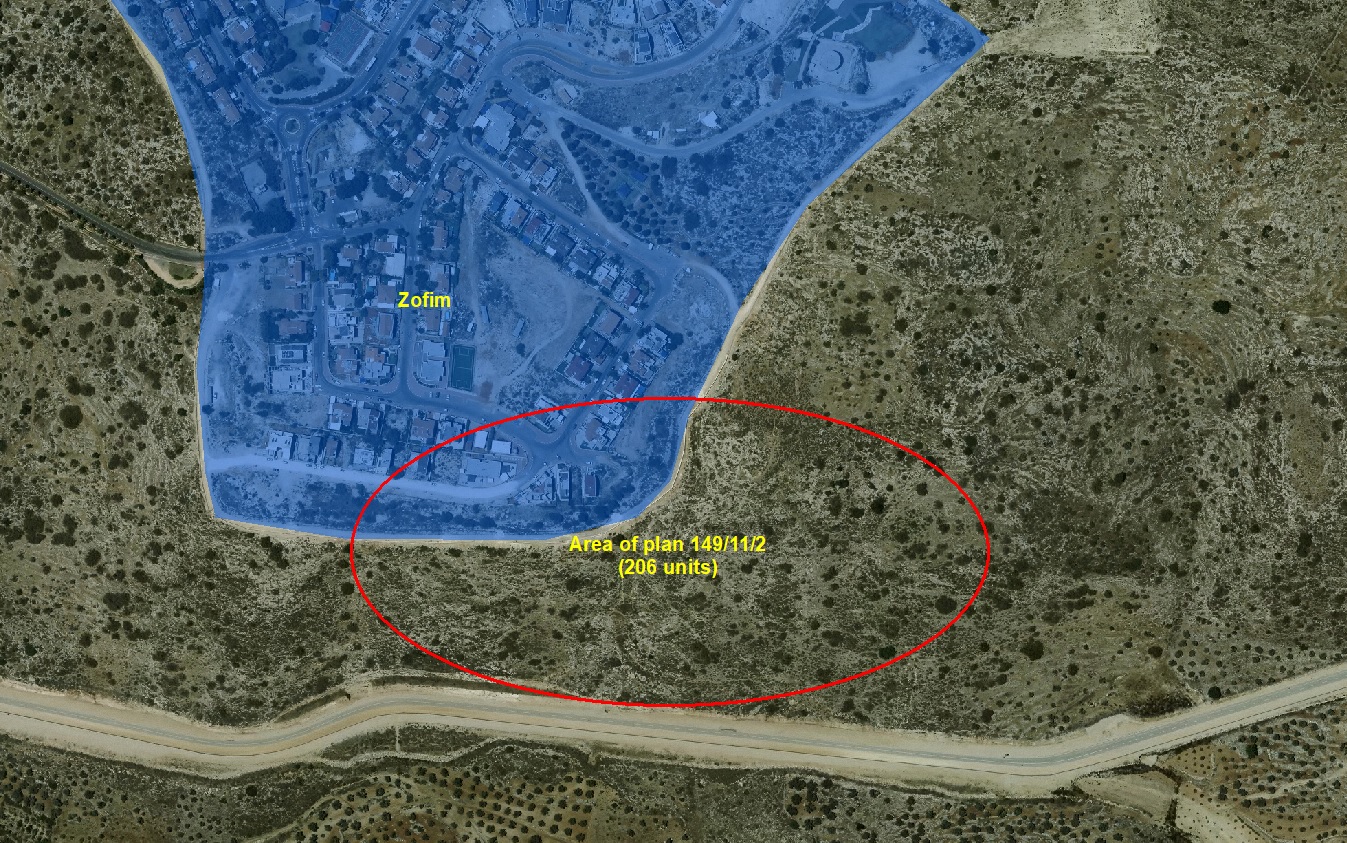 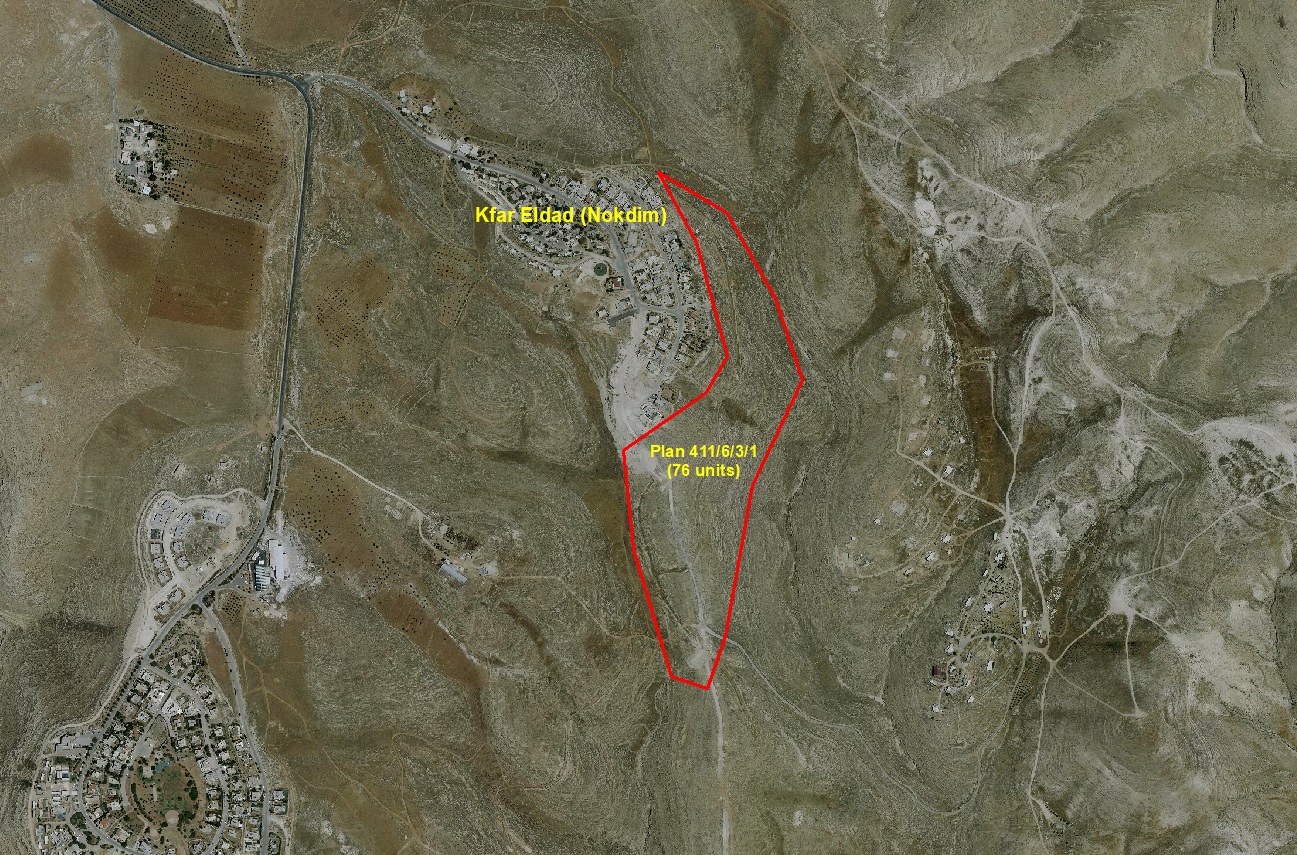 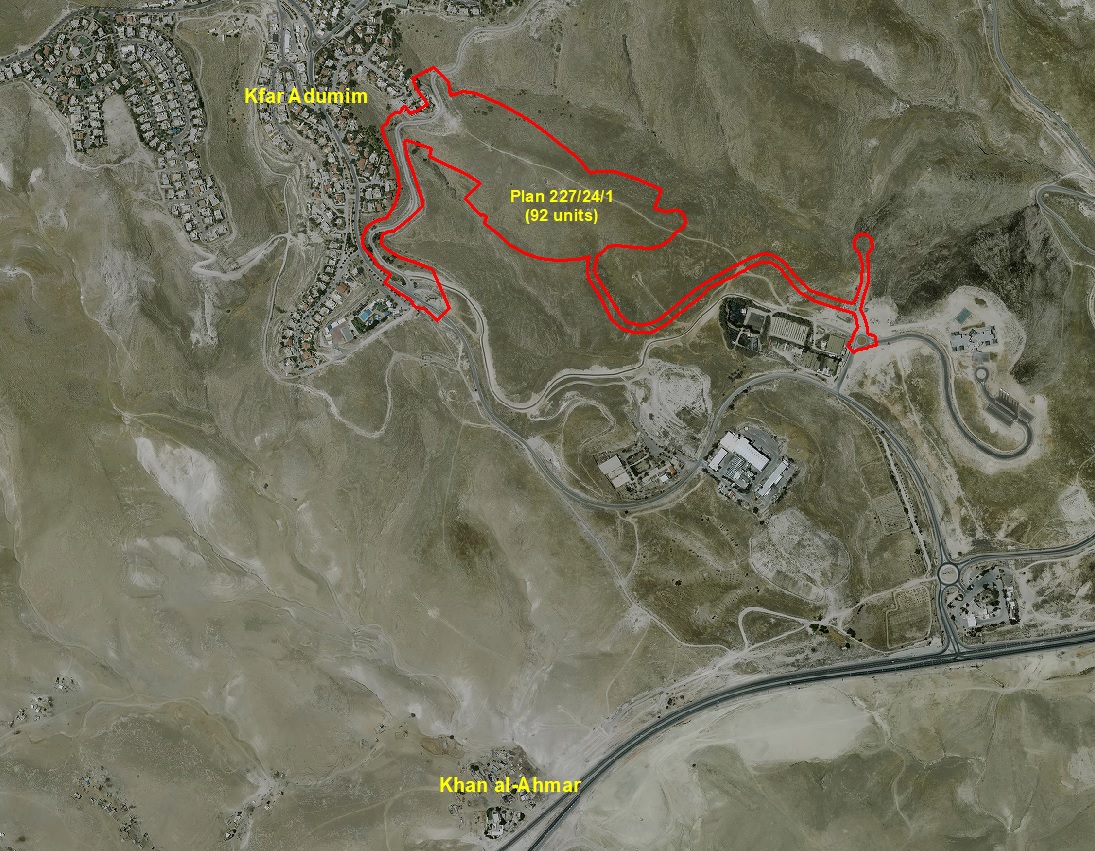