Not knowing whether this was a prank or a threat, we quickly reported the death threats to the police.

It turns out the guy who sent the message was the same guy who told Yariv a few weeks back that he will “put a bullet in his head” and called in a bomb threat to our offices and defaced our Jerusalem branch.

He has been arrested 3 times, and released 3 times..why? Because his dad has connections with high up people – when will his Dad realize that his son is dangerous and needs to pay the price for his actions? Will he only do something when his son eventually kills someone?

All of this is not unusual as when the Government is running a campaign of persecution and legislation against NGO’s and leftist groups, calling us traitors and passing legislation to act against “enemies within” (as some MKs are trying to portray us).

Today we say out loud – you can threaten and persecute us BUT we will not be silent and will not stop our activities, not in the face of darkening legislative steps  or in the face of threats by criminals.

See some of the press below: 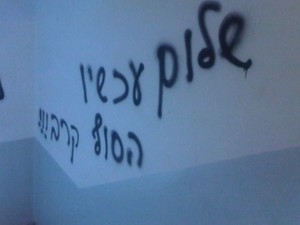 “The end is near”