A. Confidentiality and ostensible transparency

We examined the reports for 2006-2013 of nine NGOs identified with the Israeli right, and found that the sources of hundreds of millions of shekels that have influenced policy and public opinion in Israel in recent years, and continue to do so, are not transparent, and that the public has no way of knowing where this funding originates. 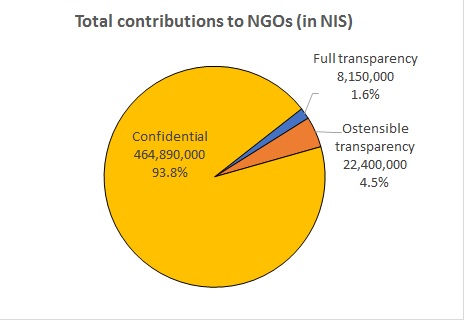 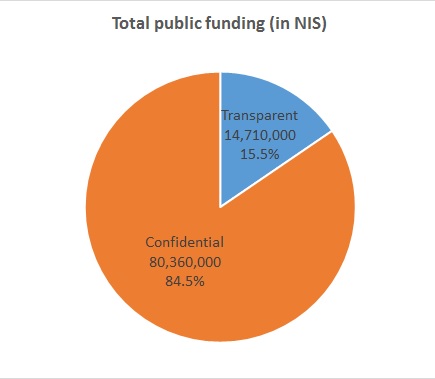 Public funding during the years 2006-2013 totaled about NIS 95.07 million; about NIS 14.71 million (15.5%) is transparent and about NIS 80.36 (84.5%) is confidential.
The first conclusion is that there is an enormous lack of transparency, of surprising scope, vis-à-vis the sources of funding of the nine NGOs we examined. Only about 3.87% of the funding is truly transparent – that is, the public can know the specific source of the funding from the NGOs’ reports, including the names of the persons or entities that contributed NIS 590.51 in total revenues (contributions and public funding) during 2006-2013.
The low level of transparency stems from several main reasons: The first reason is a large-scale lack of reporting by NGOs on their funding sources, and disparities of millions of shekels between the total revenues reported as contributions and the sums displayed in the detailed lists of contributors. In the case of the two richest NGOs – the Ir David Foundation (Elad) and the Yesha Council – there is minimal transparency. The Ir David Foundation’s file at the Registrar of NGOs does not include a single list of contributors for the years 2006-2013, while the Yesha Council’s file includes lists of contributors only for 2011-2012, and these lists were only submitted when requested by the Registrar of NGOs in 2014 as part of an in-depth audit.
The second reason pertains to public funding, which generally entails budgets or non-monetary assets transferred to the NGO from government ministries or local government authorities – that is, from the public coffers. The NGOs we examined, which receive millions of shekels in public funding, do not fully report the identity of the entities that fund them. Six of the nine NGOs we examined receive a substantial part of their funding from public sources. Israeli law permits the NGOs to withhold the names of the entities that provide this funding. This means that the Israeli public has no way of knowing who is transferring its tax money to a particular NGO.
The third reason stems from the fact that most of the reported contributions received by the NGOs we examined came from overseas (nearly all of them from the United States). Only the name of the foundation that transferred the money is cited in regard to most of this funding, rather than the name of the person or entity that actually contributed the sum. (In this study, we call this situation “ostensibly transparent.”) Israeli law allows an NGO to receive money from a foreign foundation without specifying who contributed it. (Thus, the information disclosed to the public includes only the name of the foundation and the sum channeled through it.) American law, under which these American foundations operate, also does not require disclosure of the names of their contributors whose money is channeled to NGOs in Israel. Consequently, there is particularly low transparency regarding the sources of foreign funding of the NGOs we examined. In fact, transparency is almost non-existent. If Israeli legislators seek to increase the transparency of these funding sources, they will have to do this in a way that requires the NGOs to report the identity of the original contributor of the money and not suffice with citing the name of the American foundation that served as a conduit for transferring the funds.
The findings of the study point to a clear conclusion: There is a need to increase transparency regarding the sources of foreign funding of these (and other) NGOs. This conclusion gains further strength when considering the fact that money streamed to the NGOs from abroad comprises the lion’s share of their annual budgets.
In summary, the study shows how the NGOs we examined submit reports that do not allow the public to receive a true picture of the sources of their funding. The bottom line is that most of the funding these NGOs receive remains in the dark, is not open and transparent, or is only ostensibly transparent.