On August 31, 2014, the Israeli Central Bureau of Statistics (CBS) published the quarterly data of construction startsaccording to which in April-June 2014, 235 units started to be built in settlements, while in the parallel period in 2013, 801 units started. This means,70% drop.

At the same time, data collected by Calcalist newspaper, showed that at the first 7 months of 2014, 2,299 housing units were marketed by the Israel Land Authority in settlements which was an increase of 866% compared to the same period in 2013.

Marketing means that the Israeli Land Authority signs an agreement with a buyer who won a bid to construct a house/building. The marketing, as opposed to the publication of a tender, is only counted when a winning bid is elected and an agreement is signed. It is important to note that this figure include only houses that are initiated by the government and are sold through tender and it does not include the many units that are being sold without tenders.

The best explanation to the drop in the number of construction starts is that last year’s numbers were unusually hi compared to the years before. What we see today is the “back to normal” trend when construction continues in the pace of 250-300 units per 3 months.

The number that the CBS publishes is being retroactively updated all the time as more data is collected and analyzed. For instance, on August 31, 2013 the CBS published that in April-June 2013, 564 units started to be built in the settlements. Since then the number was updated and today it is 801 units (42% more). Likewise, the number of units starts that was published today for April-June 2014 (235 units) is expected to rise significantly.  This means that a more accurate comparison of this year’s number to last year’s should be between the number that was published on August 31, 2013 (564 instead of 801 units) compared with the 235 units of this year.

4.       The numbers on the ground are always higher than the CBS data.

The CBS’s construction figures are based mainly on reports by the local authorities on building permits issued (no field surveys to check actual construction are conducted).

Following is the methodological explanation of the CBS to the data of the construction starts in settlements (with English translation): 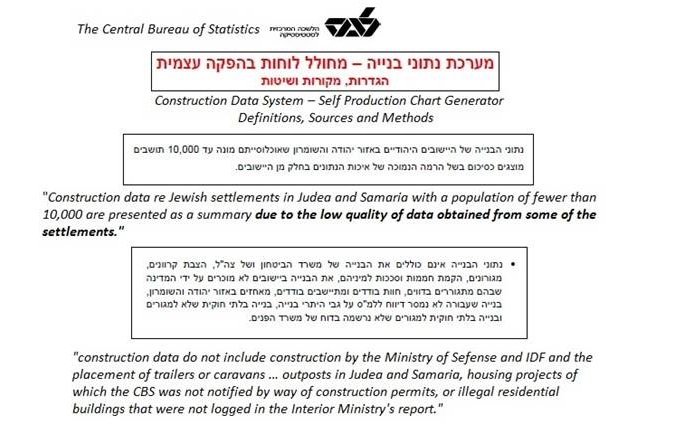