Last Sunday I was deeply aggrieved that only one hundred Israelis could attend the historic meeting organized by the Geneva Initiative at the Muqata in Ramallah. If it were up to me, all the citizens of Israel would come and see firsthand the dramatic change that has occurred in Palestinian society.

The site identified more than anything else as Arafat’s command headquarters at the end of the second intifada turned for a few hours into an excellent and welcoming Mediterranean restaurant that extended warm hospitality to the dozens of Israeli guests invited to the meeting, including military reserve officers and some members of the Likud and Shas.

The leadership of the Palestinian Authority showed up in full force and spoke openly and frankly about its desire to achieve peace through negotiations, a peace based on the principle of two states, Israel and Palestine. Beyond the speeches and the political messages, between the stuffed grape leaves and the sweet knafeh, it was hard not to notice the tremendous change in the Palestinian community and its leadership in Ramallah.

The Muqata is the center of a responsible and strong government with a secular and moderate world view, that believes in reaching an agreement and living together in a Palestinian state alongside Israel. Abu Mazen is not a weak leader and has full command of all the PA areas in the West Bank. Saeb Erakat described it well by saying that the West Bank has never been so quiet and safe for Israelis, more than when the IDF was stationed on every corner and in every kasbah from Nablus to Hebron. 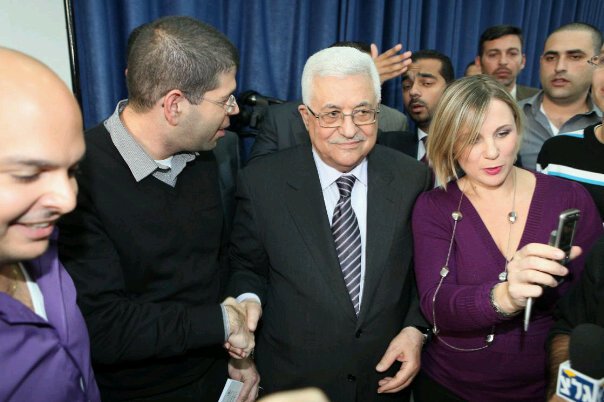 Outside of the Muqata I met a Palestinian journalist who speaks fluent Hebrew and is among other things a fan of the Maccabee Tel Aviv basketball team and a devout follower of its games on Thursdays. He too expressed to me the Palestinians’ desire for peace and normalcy and described how renouncing terror and violence is not only the choice of the leadership but a central plank in the current Palestinian narrative.

The Israeli government gave up the diplomatic process for the settlers

It was impossible not to sense the frustration and sorrow of all the speakers at the conference over the lack of progress in the peace process and the refusal of the Israeli government to enter serious negotiations over a final agreement. Just when we have a real partner for peace, Israeli society radicalized to the right and elected a Knesset and government that don’t really believe in or want a final agreement with the Palestinians.

Despite his declarations at Bar Ilan University and in Washington, Netanyahu is not willing to talk about borders and is inventing excuses to gain time. Judging by the outcome, the government of Israel gave up the peace process only to continue to give in to the settlers’ obsession to build a few more thousands of housing units in the territories. The Israeli public is indifferent and cynical and does not sense the gravity of the opportunity to realize the peace process and the gravity of the danger a failure of the process can mean for the entire region.

The Palestinians I met in Ramallah are realistic, moderate, tired of the conflict and thirsty for a solution. They are not afraid to present maps, to speak openly about land swaps and to de facto renounce the right of return. As opposed to the Israeli leadership, the Palestinian side already understands that the era of poker games and foot dragging is over, the solution is known and now it has to be put into action.

Just when there is calm and quiet in the territories, it would be a crime to turn our backs on the majority of the Palestinian people, who have chosen dialogue and peace, and send Abu Mazen and his people to compete with Hamas over Palestinian public opinion empty handed.