Earlier this week Haaretz reported that a new illegal outpost is being established on private Palestinian land near Givat Salit and near the Palestinian community of Al-Khaimah. Yesterday (25.10) the settlers moved the outpost from the private lands and re-established it on “state lands” in a nearby hill.

It is yet to be seen whether the government takes action to evacuate the illegal structures or allows for the substantiation of a new outpost.

All of the structures in Al-Khaimah were demolished completely by the Civil Administration approximately a month ago and Peace Now tends to think that the demolition of Al-Khaimah and the establishment of the new outpost are related, in the sense that the settlers exerted pressure on the government to demolish specifically in that area. Furthermore, It is possible that the new illegal outpost is meant to serve as a bargaining chip by the settlers, who will demand demolitions of more Palestinian homes if the government will seek to enforce the law and evacuate them. Peace Now is familiar with at least one case in which this method was utilized by the settlers, when two years ago settlers established an illegal outpost near the settlement of Maskiyot and the Palestinian community of Ain al Hilweh and agreed to evacuate only after several Palestinian homes were demolished.

See below a map of the area, and a photo taken on October 25th. 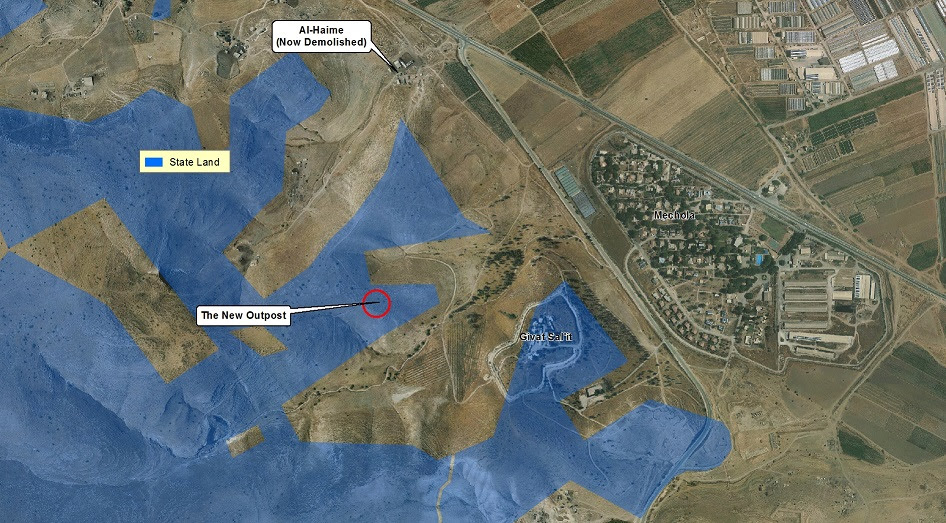