Data released by the Central Bureau of Statistics shows clearly that in the West Bank Settlement of Ariel there is no housing crisis and there is no justification for a continued construction. Since 2003 to 2009 every year (except for 2007) Ariel immigration was negative – which means more people left the settlement  of Ariel than moved to reside there. The total number of residents Ariel has increased slightly over the years, mainly due to natural growth (more births than deaths). However it is well known that babies have little need for their own apartment at least until the age of 18. In recent years the settler leadership began to send a group of ideological religious settlers to reside in the settlement so to “strengthen Ariel”. This can be another indication that the average Israeli is not moving to Ariel.

Despite the fact that there was no large demand for new housing, the construction continued. Since the beginning of the negative migration balance in 2003 till 2009, some 402 new homes started to be built in Ariel.

In short many residents have left Ariel, some of these empty apartments are perhaps being rented by students studying in the local college – but are not used by settlers who make Ariel their permanent residence. Due the lack of demand, current construction will result in cheaper apartments.

Data from the Israeli CBS on Ariel: 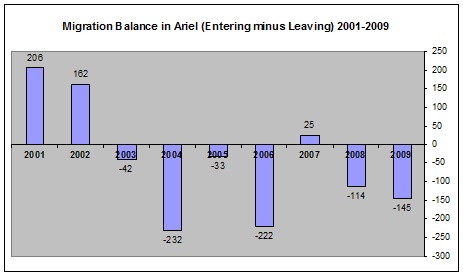