Yesterday the regional committee of planning published ads announcing the final approval and validation of two plans in Har Homa:

A dramatic expansion of the neighborhood to include another hill south-east of Har Homa. 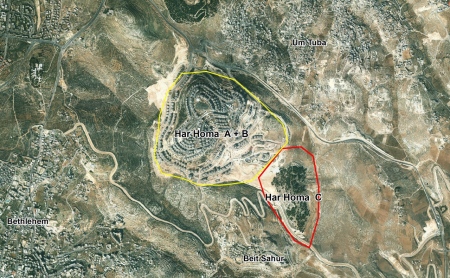 This announcement by the regional committee is the last step of the planning process. Now that the plan is approved and published as valid, the implementation stage can start. In Har Homa, the implementation should include tenders and then construction permits which I beilive should take at least another 2 years before the bulldozers can start working.

The plans in Har Homa are initiated by the government (the Ministry of Housing), on land that was expropriated for public use and is run by the Israeli Land Authority (ILA). The ILA together with the Ministry of Housing should publish tenders calling for contractors to bid for building the planed units (this should take at least 8 months or a year). After that, the wining contractors should prepare detailed construction programs and receive construction permits from the Municipality of Jerusalem. This is mainly a bureaucratic procedure that should take another 6 months to a year. In parallel, the Ministry of Housing should start building the infrastructure (prepare the roads, the lots, the sewage etc.), which is also done through bidding procedure and then construction permits from the Municipality.

The Minister of Interior announced that this plan is meant to serve as part of the government’s answer to the housing crisis. To me it only shows how cynical this government is. Instead of taking care of the housing issue in Israel, the government is trying to score points with the policy of settlements, to take advantage of the need for housing and encourage Israelis to move to settlements for economic reasons.

Har Homa is one of the most controversial neighborhoods in East Jerusalem, because it was started after the Oslo accords and because it creates a barrier of Israeli homes between the Palestinian East Jerusalem and Bethlehem, preventing a continuous territory from the potential Palestinian state. Har Homa C specifically is sealing off yet another hill that could have severed as such territorial continuity. 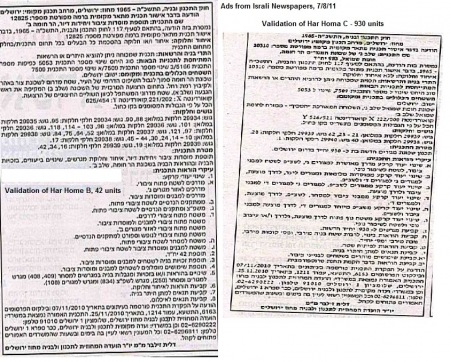