The past few weeks can be confusing for those who try to keep track of the Israeli activity in settlements. So many plans and approvals, some of which lethal for the two state solution, make it clear that the Government of Netanyahu decided to push forward as many approvals as possible in order to set facts on the ground before the elections in Israel, as long as they don’t feel a “threat” of any renewal of the peace process.

Following are the details of the recent developments in settlements:

1. E1 and 3,000 new tenders
2. Plans for 6,600 units in East Jerusalem
3. Givat Hamatos
4. Tenders for 1,216 units the West Bank and East Jerusalem
5. Gevaot: a new city South-West of Bethlehem is approved.
6. A Palestinian family is threatened to be kicked out of their home in Sheikh Jarrah

1. E1 and 3,000 new tenders – Following the UN resolution on a Palestinian state, the Government of Netanyahu announced the intention to promote the planning in E1 and to issue 3,000 tenders in settlements and in East Jerusalem. On December 5th, the plans for the construction of 3,426 units in E1 were approved for depositing.
See more here: Everything you need to know about E1. 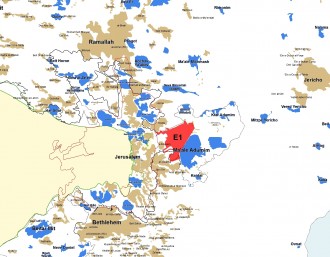 3. Givat Hamatos – Givat Hamatos is a plan that if built, might prevent the territorial continuity between Bethlehem and the Palestinian neighborhood of Beit Zafafa in South Jerusalem, and thus might prevent the possibility for a two state solution with a Palestinian capital in East Jerusalem.
The plan in Givat Hamatos is divided into 4 plans (A, B, C and D). The largest and the most lethal of them is Givat Hamatos A, for 2,610 units, got the final approval from the local planning committee on Wednesday (the 19th of December). The Regional planning committee have surprisingly rejected today plan C. However, unfortunately the rejection does not prevent the damage of the other plans. See more here. 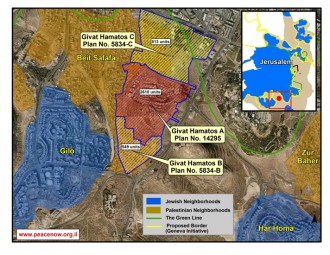 4. Tenders for 1,216 units in settlements – Yesterday, December 19th, the Ministry of Housing published the list of upcoming tenders that will be issued in the next few months, including 1,216 units in settlements and in East Jerusalem. These are part of the 3,000 units announced by the Government following the UN bid and include: 398 units in Beitar Illit; 108 in Karnei Shomron; 167 in Efrat; 102 in Imanuel; 167 in Givat Ze’ev; 106 in Adam (AKA Geva Binyamin); and 168 in Har Homa. Usually it takes a few months to a year from the issuing of the tender till the construction on the ground begins. See maps and full details here. 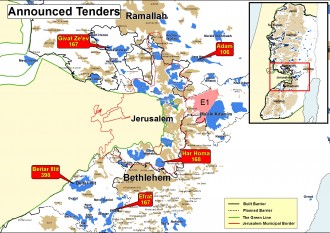 5. Gevaot: a new city South-West of Bethlehem – The Minister of Defense approved the promotion of a plan to build 523 units in a new settlement called Gevaot, South-West of Bethlehem. This is part of a larger plan to create a city of 6,000 units in an isolated area at the Gush Etzion settlement bloc. This is not a final approval of the plan it allows the promotion and depositing of it and within a year or two to even start the construction. See details and a map here. 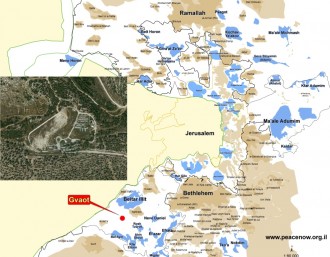 6. And in addition to all that, a Palestinian family in Sheikh Jarrah is threatened to be kicked out of home in order to enable settlers to move in. The issue of settlements at the heart of Palestinian neighborhoods in East Jerusalem and specifically in Sheikh Jarrah became a central issue at the political agenda after in 2009 two Palestinian families were kicked out of home in Sheikh Jarrah and settlers moved in. Another eviction would add more tension and friction to the fragile and sensitive situation in East Jerusalem.
The involvement of an official government authority in the eviction is of specific concern. See more here. 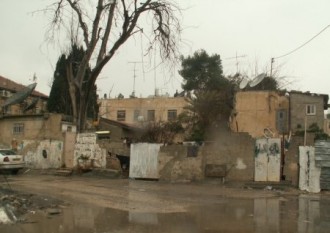