Last night over 2000 people attend a protest organized by Peace Now in central Tel Aviv against the new wave of anti-democratic laws and the crack down on free speech by the government.

Some demonstrators stuck masking tape over their mouths to protest proposed changes to Israel’s libel law, which would make it easier for people to sue media companies.

“The object of persecution is persecution”, said MK Nitzan Horowitz in his address to the crowd, citing George Orwell’s book “1984.”

Peace Now General Director Yariv Oppenheimer said “only we can stop the legislation … Not only the social protest started on Rothschild. This is where the democratic revolution will start too.”

Attorney Talia Sasson, who wrote a report on the illegal West Bank outposts when she served in the State Prosecutor’s Office, also spoke. “Dark forces have risen against Israel. They want us not to speak out against the West Bank settlements. They want to prevent Israeli citizens from mourning their Nakba,” she said, referring to the “catastrophe,” as Palestinians term Israel’s founding in 1948. “And why are they doing it now? They are changing the regime … We cannot sit idly, we must cry out for Israeli democracy.” 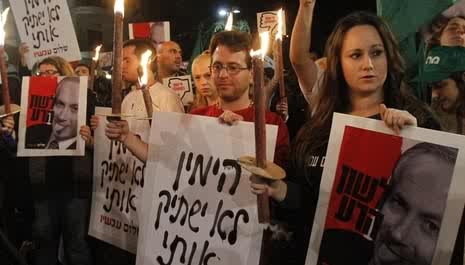