Last night, for the second time this week, vandals attacked Peace Now offices in Jerusalem. After spraying the offices with graffiti the attackers announced over the intercom to all the occupants of the building that this was a”Price Tag Incident” and they have ten minutes to evacuate the building before it would explode.

Police were called and scanned the building.

Yariv Oppenheimer Peace Now General Director: “We have warned, including in a petition to the Police Commissioner, that Peace Now is being threatened. The political leadership backs up these incidents. Even if, on the face of it, there is condemnation, in practice the hooliganism of the right has support in the Knesset.” 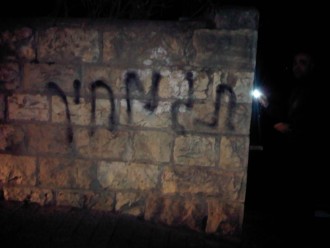