According to the media reports, last week the state destroyed a shed and a goat pen in the Mitzpe Yitzhar outpost – overall two structures. 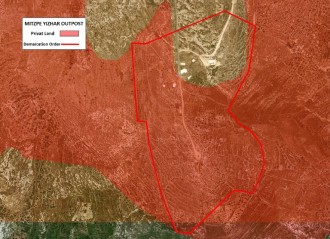 The story over Mizpe Yitzhar started in 2006 with a Peace Now petition to the court demanding the realization of delimitation orders that were issued for Mitzpe Yizhar and another 5 outposts.

On March 2011, the State announced in response that it had decided to demolish all that is built on private land until the end of December 2011 and to complete a further study to decide whether to legalize the structures on state land. On November the State announced that the outpost of Givat Assaf would only be evacuated by July 2012, (it is constructed entirely on private land) but the remaining outposts on private land would be demolished by the end of 2011, meaning Mitzpe Yizhar and Ramat Gilad.

The court required the State to provide an update on the implementation by early January 2012. In response Peace Now demanded that the update will address how the State is dealing with the illegal construction which is on state land as in the delimitation orders. The court agreed with us and we await to see in January the State’s response.

Following is current timeline of the potential evictions of outposts – based on the courts procedures:

2. Ramat Gilad – the State promised to evict the structures on private land by the end of December 2012.

3. Migron – the only case where there is a court ruling – should be removed by the end of March 2012

4. Givat Assaf – the State postponed the eviction and declared it will be removed by July 1st 2012.

6. Jabel Artis – the State declared in court that it will be removed by the end of 2012.