How much do the settlements cost us?

If you are looking for a bottom line with a number at the end, we are sorry to disappoint you, but it is very hard to estimate the price of the occupation and the settlements. The difficulty is not only because Israel pays very high prices for maintaining the settlements and the continued occupation in terms of its security, values, society and international standing but also because the items in the state budget simply do not specify allocations to the settlements explicitly. Most of the budget items are worded in a general way without a geographical breakdown and without listing the communities for which the money is designated. Nevertheless, past attempts to estimate the price of the settlements reached 2.5 billion shekels a year.

How, then, do the settlements receive the surplus allocations? It is done in the budget allocation stage apparently in the decisions of the various ministries to divide the budget pie between the different communities, and their choice to prefer investments and projects in settlements at the expense of other locations. In order to know about special benefits for the settlements, the decisions of the various government ministries must be followed on a daily basis, and complete transparency about the budget allocations is needed.

Retroactive information – Some of the figures can be found in the publications of the Finance Ministry and the Central Bureau of Statistics on state transfers to local councils. The information is published after the end of the budget year and collected retroactively based on the actual budget performance. The transfers to the local councils are just part of the overall investment in the settlements. According to Finance Ministry figures, in 2007 the state transfers to local councils in the territories amounted to NIS 1,127,455,469 (more than 1 billion and 100 million). That amounts to 8.9% of the total transfers from the state to councils that year. At that time the number of residents in the settlements was 3.8% of the residents of Israel. Therefore the budget for the settlements was more than double their relative size in the population.

According to CBS figures, gross investment in public construction in Judea and Samaria (not including East Jerusalem) in 2009 was NIS 431 million, which constituted 15.36% of total public investments in construction for housing that year. It should be noted that some of that amount is included in the amount transferred by the state to the local councils.

A. Amounts that appear explicitly in the budget proposal (NIS): 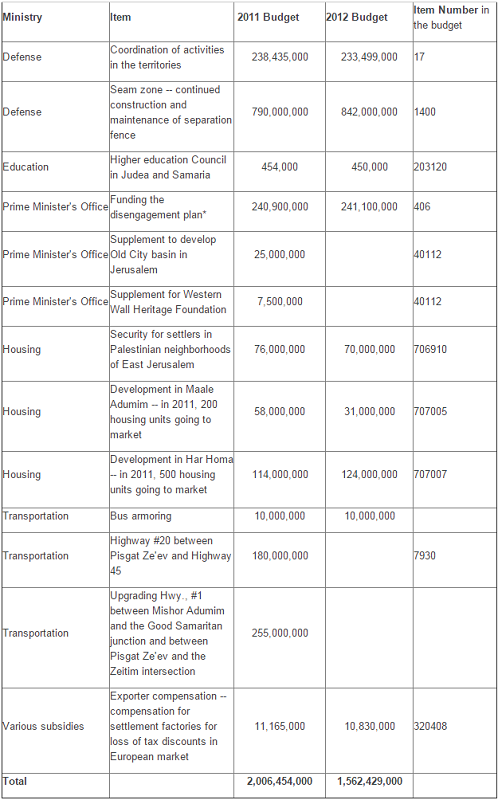 B. Selected items where budgets for the settlements are hidden: 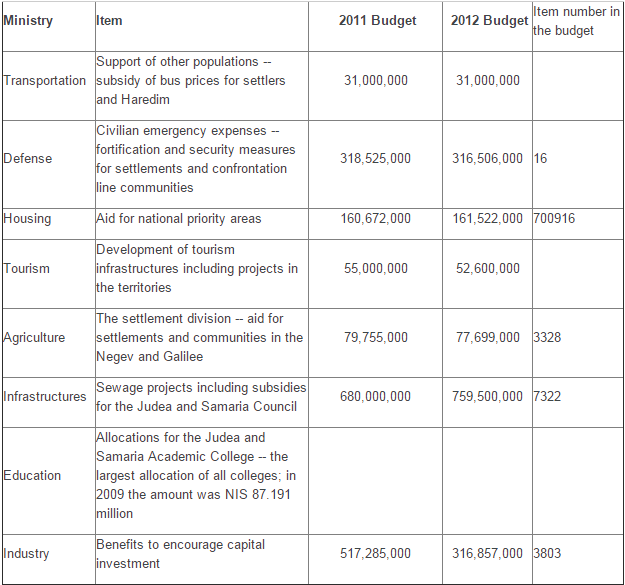 • Participation in student busing at a rate of 90% for Judea and Samaria councils (that use bulletproof armored buses). For comparison: in other councils the ministry’s participation ranges between 40% and 85%.
• The Council for Higher Education in Judea and Samaria – responsible forpost-primaryinstitutions in the settlements (Ariel College, the Orot College in Elkana and the Herzog College in Alon Shvut). The Council’s funding comes from a budget of NIS 454,000 in2011 and NIS 450,000 in 2012.
• Allocation for Ariel College – the Ariel College receives the largest allocation of all colleges (in 2009 the sum was NIS 87.191 million).

• Subsidizing public transportation by bus – NIS 31 million a year (under the code name “subsidies for other populations” – for settlers and Haredim).
• Armoring buses – NIS 10 million a year.
• Highway #20 – NIS 180 million. The road is meant to connect Pisgat Ze’ev to Highway 45 towards Modi’in and Tel Aviv. This means paving an obstacle on the road to a final settlement, with infrastructure running through Palestinian neighborhoods which are supposed to be part of the Palestinian state in the final settlement.
• Upgrading Highway 1 between Mishor Adumim and the Good Samaritan junction, and between Pisgat Ze’ev and the Zeitim intersection – NIS 255 million.
• Additional roads and projects in the settlements – the budget specifies only especially large projects but there are many other projects in the settlements that are not specified in the budget documents.

a. Strengthening the Jewish hold on East Jerusalem – a multi-year project to strengthen Jewish presence in East Jerusalem through tourism development. The 2011 budget includes a NIS 25 million supplements.
b. Supporting the Western Wall Heritage Foundation – an organization that manages and develops the Western Wall area and is in charge of archaeological excavations and construction in the Muslem quarter and its surroundings.The 2011 budget includes a NIS 7.5 million supplement.

D. The hidden budgets in the budget proposal:

Most of the settlement budget is hidden in the various budget items without explicit specification. The state budget is written generally without regional specification, so that it is impossible to know how much of it is dedicated to the settlements and how much to other parts of the country. Only special items for the settlements, which cannot be written into other general items, appear explicitly in the budget, and they amount to about NIS 2 billion.

For example, the Housing Ministry’s budget is NIS 5.9 billion and it includes planning, development and construction, as well as grants and benefits to buy apartments. Part of that budget goes to settlements. The same is true for the budgets of the ministries of agriculture, industry and all the other ministries.

Continuing the settlements and the occupation of the territories is a controversial question in Israel. The financial price of at least NIS 2 billion a year is tremendous. But the budget remains vague and unspecific regarding the funding of the settlements. A comprehensive process is required to make the state budget transparent and clear regarding investment in the settlements. This means requiring the government ministries to report the geographic breakdown of their budget allotments and close monitoring of those figures.

Additional Reading Regarding the Cost of the Settlements:

The Burden of Occupation – A Thorough Research by Adva Center – click here.